A traditional roast leg of lamb is a beautiful piece of meat. Served alongside roast veggies, maybe some steamed asparagus, it’s a fine and delightful centerpiece to any holiday feast, especially Easter. But if you want to freshen up your holiday feast while also getting dinner to the table much more quickly, then you should try making this grilled butterflied leg of lamb. It’s a beautiful presentation in its own right and is actually tastier than a traditional leg. Here we’ll give you the thermal lowdown and the temp tips you need to get perfectly rosy lamb to the table in record time.

Why butterfly leg of lamb?

The more time I spend with the grill and the smoker, the more I find that butterflying meats is one of the greatest hacks there is. Butterflied (spatchcocked) chicken is fantastic, and butterflied pork butt will get you better-tasting pulled pork in only 4–5 hours. Well, the same is true for a leg of lamb.

By butterflying a boneless leg of lamb, you decrease the distance from the surface of the lamb to the thermal center, meaning you don’t have to pump heat into it for as long a time to get the thermal center up to temperature. It cooks faster. But there’s more to it than that. By decreasing the thermal distance, we also reduce the thermal gradients in the meat, meaning that we get a more even cooking.

To illustrate this, imagine the amount of heat that has to cross the border of the meat in order to cook it all the way to the center. In a thicker cut, more “bits” of heat will cross that surface in order to heat every bit of meat into the center. But in a thin cut, fewer tiny heat soldiers have to invade the meat to conquer the whole territory. Since there has been less “foot traffic” (thermal traffic) passing through the first few millimeters of meat, those millimeters are less likely to overcook. As long as you don’t force too much heat into the meat too quickly (we’ll talk about that in a minute) it should be nice and uniform.

But wait! There is yet another reason to butterfly your lamb: flavor. The fat-football shape of a leg of lamb provides relatively little surface-to-volume ratio, so there isn’t much seasoning per mouthful of meat. But if you take a lot of the inside and put it on the outside by flaying the thing out flat, you vastly increase the amount of seasoning per mouthful. There are few bites on the finished product that don’t have a piece of grilled, seasoned/salted surface, so it’s far tastier than its nearly spherical cousin.

Temperatures for butterflied leg of lamb

To cook the lamb, first smear it with the rub described below, then grill it over direct heat until it is nicely browned with bits of char on it. This will give you depth of flavor. Once the outside is nicely browned, move your meat to indirect heat. We used our Smoke X2™ multi-channel thermometer hooked up to our Billows™ BBQ Temperature Control Fan to keep our grill running at 250°F (121°C), a perfect temperature for easing the meat up to its final doneness temp. We set the high-temp alarm on the meat-probe channel to 130°F (54°C) so that it sounded as soon as the leg of lamb headed into medium-rare territory. With such a low cooking temp and such a thin piece of meat, there is very little carryover cooking, so don’t plan on the temp going too much higher than your pull temp. It took a little over an hour to cook through.

Verify the temps in the butterflied leg, of course, with your Thermapen® to make sure it’s done everywhere. Turn and rotate the leg as needed to get it done evenly. Or, don’t and let there be rarer slices for those that like it that way. That’s not a bad move, but you should know where they are, and the Thermapen will help with that.

You can season your lamb with any number of cultural flavor palates, but I like using a wet rub of herbs for it. We used fresh mint, fresh parsley, an onion, some vinegar, some chili, and some black pepper which we made into a paste in the blender. We scored the fat cap on the leg to get good adhesion and penetration and rubbed the paste into all the nooks and crannies. This ended up even better than expected because as the onion in the paste cooked, it sweetened (as onions do) and added another layer of flavor to the roast.

And look, I know mint jelly is generally frowned upon, but some kind of mint sauce is a terrific accompaniment. (Even though we’ve minted the surface already, the fresher, uncooked mint flavor is very welcome) Try putting the leaves from one bunch of mint into a blender with 2 tsp vinegar, 1/2 tsp kosher salt, 2 tsp sugar, and enough water so that the blender can do its thing (1/2-ish cup). Whiz it all together until it is a bright green, thin liquid. Spoon it onto your lamb either on the serving plate or on your own plate and relish the flavor.

I love lamb, and I hope that you’ll give this recipe a shot. Its unique flavor, mingled with the mint and onion and chili, is a real treat that any meat lovers at your table are sure to enjoy. Follow our thermal tips by monitoring critical temps, butterflying, searing, and then finishing it over low heat. You will get just the doneness you want and I think you’ll be glad you tried it.

Oh, and if you want to use this as one piece in an Easter buffet, you could also cook up a double-smoked, glazed ham and some smoked deviled eggs to serve it with. Throw on some pickled asparagus and pickled radishes, some charred grilled carrots and beets, and some fresh homemade bread and you’ve got a buffet that will not soon be forgotten. 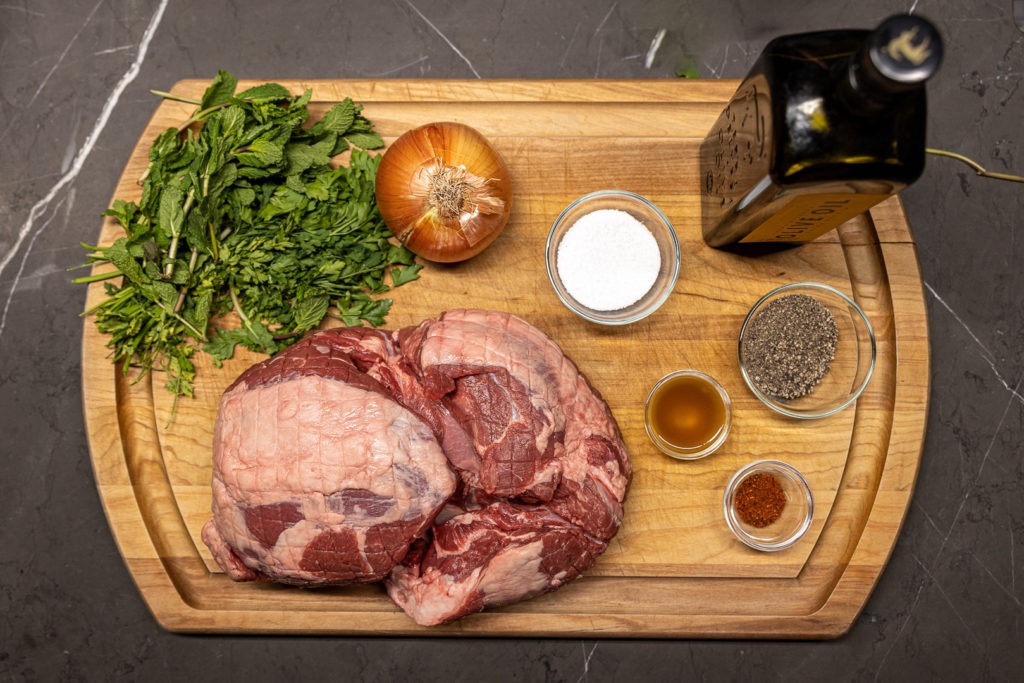 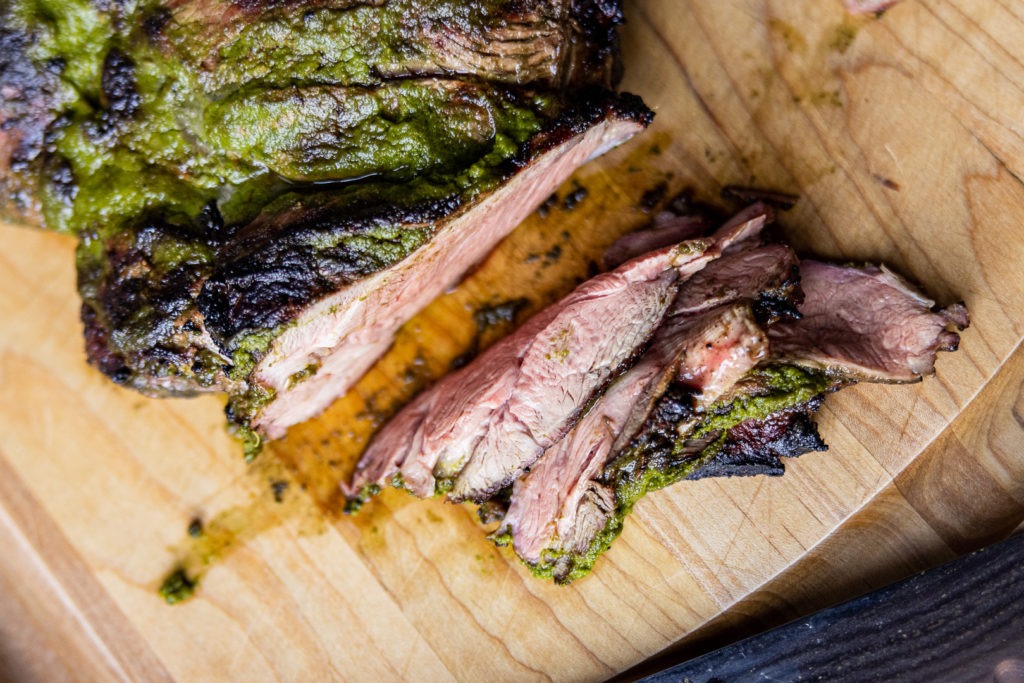