People go crazy for grilled chicken—and why shouldn’t they? It’s delicious—that crispy skin, that juicy, savory meat. Of course, people often grill individual parts of the chicken., but why not grill the whole thing? In this article, we’ll discuss the why’s and how’s of grilling a whole chicken so you can get delicious, crispy-skinned grilled chicken every time.

The primary concern with cooking chicken is getting it up to a food-safe temperature. Salmonella bacteria are endemic to chicken, so it’s important to cook your chicken to a temperature that kills those bacteria, rather than cooking it for a predetermined time. That bacterial lethality happens at different rates depending on the temperature at which the food is cooked and held. It happens instantly at 165°F (74°C) while it takes 54.4 seconds to kill the bacteria at 155°F (68°C), and 4.2 minutes at 150°F (66°C). If you can get your chicken up to 157°F (68°C)—our target temperature for this recipe—and hold it at that temperature for 34 seconds, you will have safe chicken that is much juicier than chicken cooked all the way to 165°F (74°C).

That’s all well and good for chicken breast, which is easier to dry out and is very tender. But what about for the dark meat? As we’ve discussed before, chicken thighs are better cooked to a temperature around 175°F (79°C). The tough connective tissues that make thighs and legs chewy and rubbery don’t break down until those higher temperatures. That’s what makes them so good for BBQ competitions! So you don’t want to pull them from the heat at 157°F (68°C). You want to let them go quite a bit hotter. But then you’ll dry out the breast…

If this strange juxtaposition of cooking times seems familiar, you may have run across these same ideas when cooking a turkey. Well, one of the best ways to solve this thermal conundrum is to do like we often do for the turkey and spatchcock the chicken. Spatchcocking the bird (also called butterflying) means cutting out the backbone and pressing the chicken flat, with the legs splayed outward. This protects the breast meat from heat by surrounding it with legs and wings. It also gives the legs more surface area exposed to heat, thus allowing the dark meat to climb to higher temperatures. So a spatchcocked bird will cook the dark meat to a higher temp while getting the breast meat to just the right temperature.

Butterflying the chicken also has the advantage of speeding up the cooking process. A whole chicken is approximately spherical, meaning that the surface-to-volume ration is minimal—there is less surface exposed to the heat per cubic inch of meat in the bird. By flattening the chicken out and removing the backbone, you vastly increase the surface area while also slightly reducing the thermal mass of the chicken. So a butterflied chicken will cook more quickly as well!

When grilling a whole chicken, we want perfectly done interior meat, but we also want crispy skin with a well-rendered fat layer. To achieve this we need a two-tiered approach: a two-zone fire for indirect- and then direct-heat cooking.

An initial indirect-heat cook will get the meat up to a temperature that is within striking distance of your pull temperature while also drying the skin out and rendering the fat layer. Drier skin will crisp better. This portion of the cook is done with the skin side up, allowing the expelled juices and rendering fat to run down over the meat, basting it, and flowing out of the chicken rather than pooling inside of it.

After you do the initial cook over indirect heat, flip the bird so that it is skin-side down and place it over the direct-heat side of the grill. This final cooking stage will give the rendered skin an incredible crisp while also imbuing the skin and meat with delicious grilled flavors and a delicate smokiness, not to mention all the tasty Maillard browning.

If you want crisp skin, you must finish the cooking skin side down. Once the skin is crisped, flipping the bird back over is a death kiss; moisture and steam rising from the meat will quickly turn even the crispest skin soggy within a matter of moments.”—J. Kenji López-Alt, SeriousEats.com

To be delicious, a chicken grilled needs little more than salt and pepper. Before putting your chicken on the grill, liberally salt and pepper both the skin and bone side of the bird.

However, to make a chicken really fantastic, you can do better. Use your favorite BBQ rub to add zip and excitement, or brine your chicken in a flavorful bath to give it a little something else. In this case, we’ve used a savory compound butter tucked under the skin of the bird. The fat from the butter will render with the fat of the chicken, helping to “fry” the skin more, and the flavorful seasonings left behind will permeate the meat with their essences.

Based on the findings of J. Kenji López-Alt on SeriousEats.com 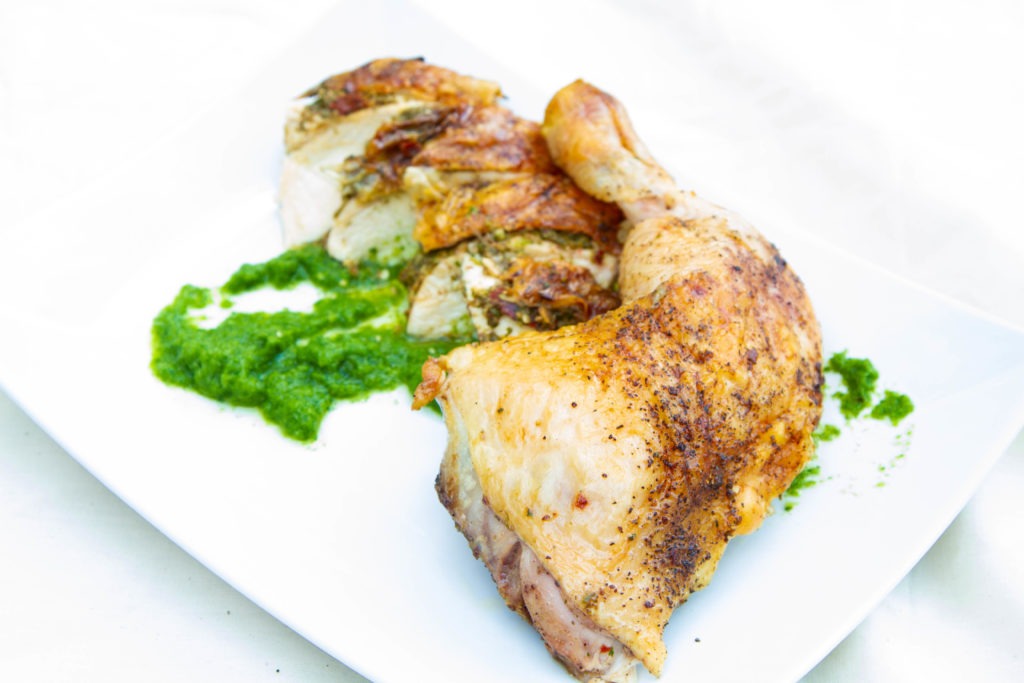 You’ll find that this recipe for whole grilled chicken is delicious and easy enough for a quick weeknight dinner. And with the aid of the ThermaQ and the Thermapen®, it’s also practically foolproof. Whether you decide to dress it up with a tasty butter under the skin or just let the chicken shine with some salt and pepper, the juicy meat and the shatter-crisp skin scented with grilled flavors will have you hooked on this method in no time.

Shop now for items used in this recipe: