If it’s summer, it’s time to barbecue! And what comes to mind when you think about BBQ if not ribs?—specifically juicy, tender, smoky pork spare ribs. Outstanding taste and texture in spare ribs are not hard to master if you understand the basic principles of time and temperature during your cook. Here, we’ll give you the thermal knowledge you need to succeed and a dead-simple method for cooking ribs in an upright barrel smoker.

To begin with, what ribs are we talking about here? Pork ribs are divided into a few different cuts (see diagram to the right). The top ribs near the spine are baby back ribs. Baby backs are fairly lean, and need special attention so they don’t dry out. The spare ribs run the remaining length of the ribs near the pig’s fatty belly. Full spare ribs contain the brisket bone and surrounding meat and can weigh upward of 5 pounds. They’re huge. St. Louis-style spare ribs have the brisket bone and surrounding meat trimmed off for a more manageable cut in the range of 3 pounds. We used St. Louis-style ribs for our cook, which still count as part of the spare-rib cut. We find them much more manageable to cook.

There are as many different ways to cook ribs as there are pitmasters. You could, for instance, make Asian sticky ribs; or you could shoot for competition-style ribs. Some people go for a 3-2-1 method of cooking and wrapping. One great thing about ribs is that all of those methods are valid and have their own merits. (Especially the Asian sticky ribs.) Here we’re going to be covering one particular method of cooking ribs in a barrel smoker, but the thermal applications that we introduce will carry to other rib-cooking methods, too.

Cooking ribs in a barrel

Barrel cookers are notorious for being rib-cooking machines, and the reputation is deserved. Ribs cooked hanging in a smoker are easy to make and turn out great if you get your temps right. And cooking them is also fun. Sticking the hooks through the flesh between the bones (we used a double-hook method to make sure nobody fell into the fire) is incredibly satisfying, and pulling the glistening, smoky racks out of the barrel when they’re done is a true gastronomic joy.

But how does it work? When you hang ribs in a barrel, their bottoms are obviously much, much closer to the fire than the tops, but somehow the lower ribs and the upper ribs all seem to cook at the same rate. What’s going on here?!?

A barrel-rib cook is a fascinating case study in applied thermodynamics. As the whole rack of ribs cooks in the heat of the barrel, juices begin to leak from the surface. At the top part of the rack, furthest from heat, very little juice runs over the surface, but the further down you go on the rack, the more accumulated juices are running over the surface. By the time you reach the bottom of the rack, the juices are much more plentiful. As the higher heat acts on those juices, it produces evaporative cooling.

So even though the bottom ribs are only a few inches from your coal bed, they have a built-in water cooling system! The further from heat you get, the less cooling power the juices exert. The result, somehow, manages to balance out in just such a way that ribs cook nearly perfectly from end to end. And these ribs come out with amazing bark and a serious smoke ring. They’re good.

Thermal considerations for cooking ribs in a drum smoker

Some upright barrel cookers have a tendency to cook on the higher side of temps. One way to combat that high heat is to use larger lumps of charcoal, which burn more slowly, spreading the heat out more evenly throughout the cook. If you only have small lumps or briquettes, don’t overload your basket and don’t light too much of it up at once!

But we can use the knowledge that these cookers cook a little hotter to our advantage. In fact, cooking ribs a little hotter and faster is a great way to go! Monitor the air temp using a Smoke™ X4 to be sure that your pit temp stays in the range between 275°F and 300°F (135°C and 149°C). If you have a Billows™ BBQ Control Fan, by all means, use it!

Because we’ll be cooking on the high-temp side of things, and because the evaporation of juices from the surface of the meat is actually integral to the way a barrel cooker works, we forego any wrapping on these ribs. Give them a good rubdown with your favorite BBQ blend and hang them—probed with a leave-in probe thermometer, of course. The pull temp you’re looking for on these (or pretty much any) ribs is 195°F (91°C). You can go a little higher if you like them closer to fall-off-the-bone, but as they are suspended by their bones, I wouldn’t push my luck too far!

When the high-temp alarm sounds on your Smoke X4, verify the temp at a couple places in each rack with an instant-read thermometer like Thermapen® ONE. You’ll be surprised how even the temperatures are across the whole rack!

Cooking ribs like this is super easy and the results are juicy, tasty, and just straight-up beautiful. All it takes is a little temperature monitoring and you can churn out fantastic ribs with a minimum of effort. No wrapping! No saucing! And all in all, these will still take about the same amount of time as classic “3-2-1” ribs—somewhere around six hours. (As with all BBQ, you can give yourself a lot more time, and then let them rest in a cooler until it’s time to eat if you get done early.) Give them a try. I think you’ll love the results.

The barest-bones, simple recipe for cooking ribs in a barrel smoker. 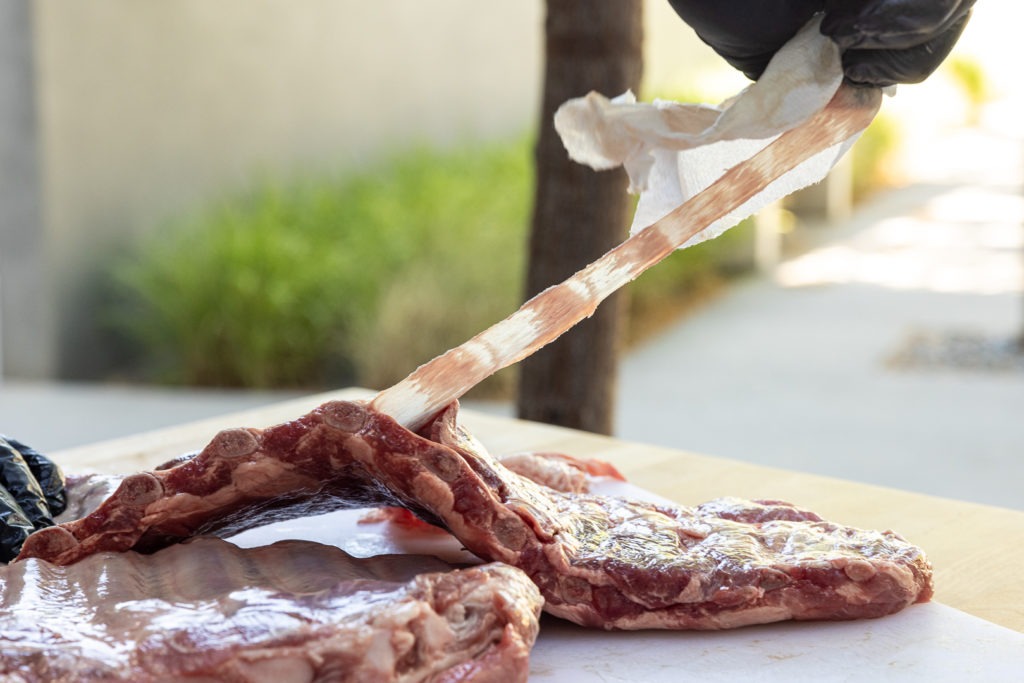 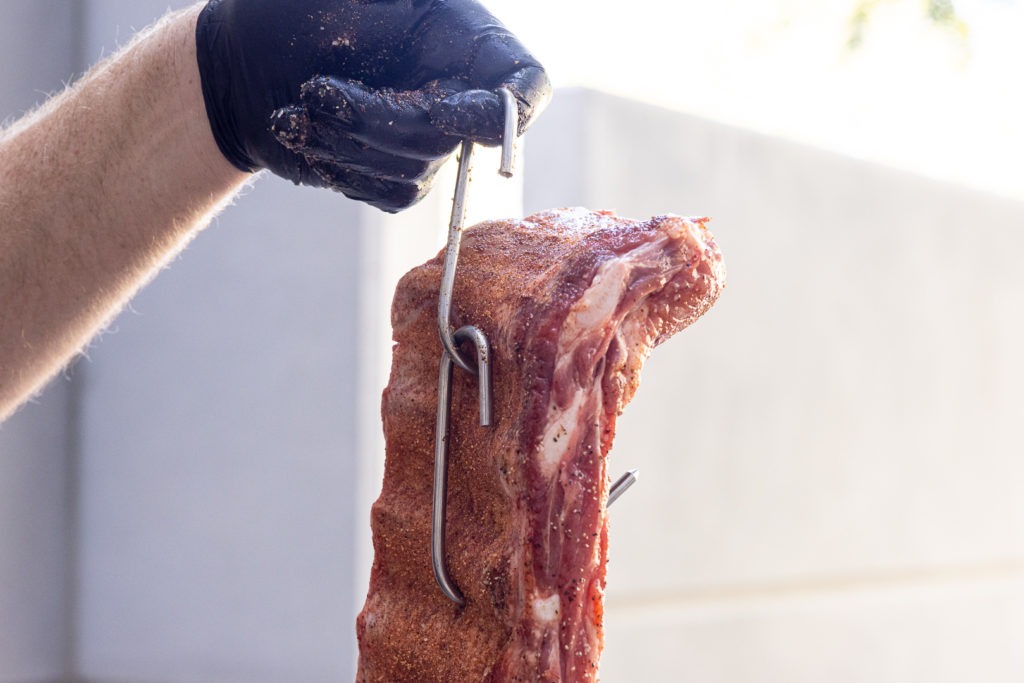 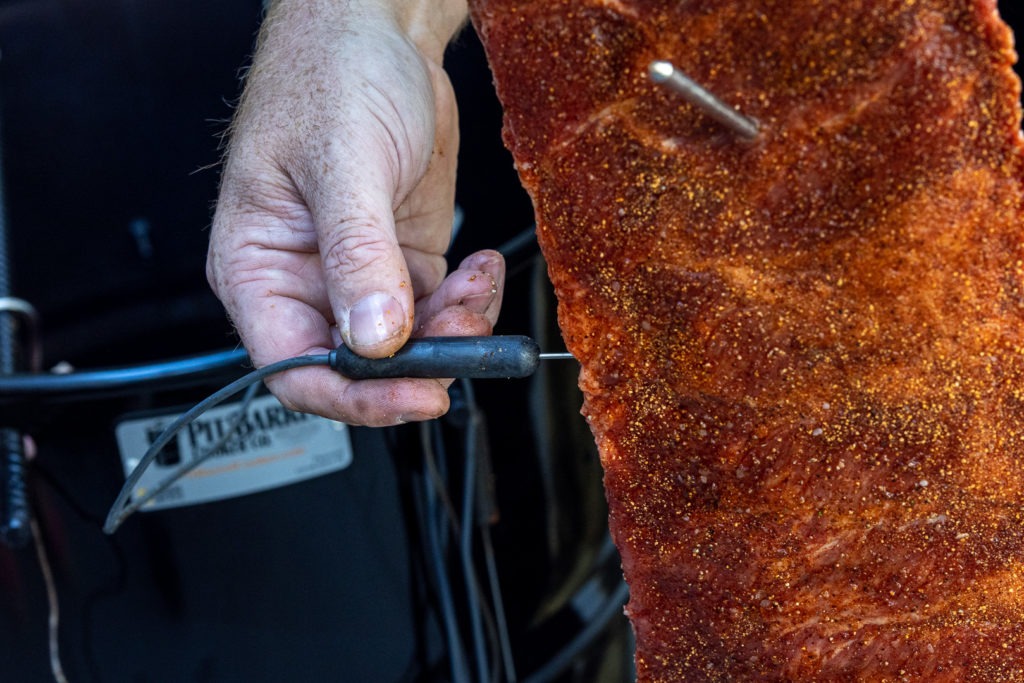 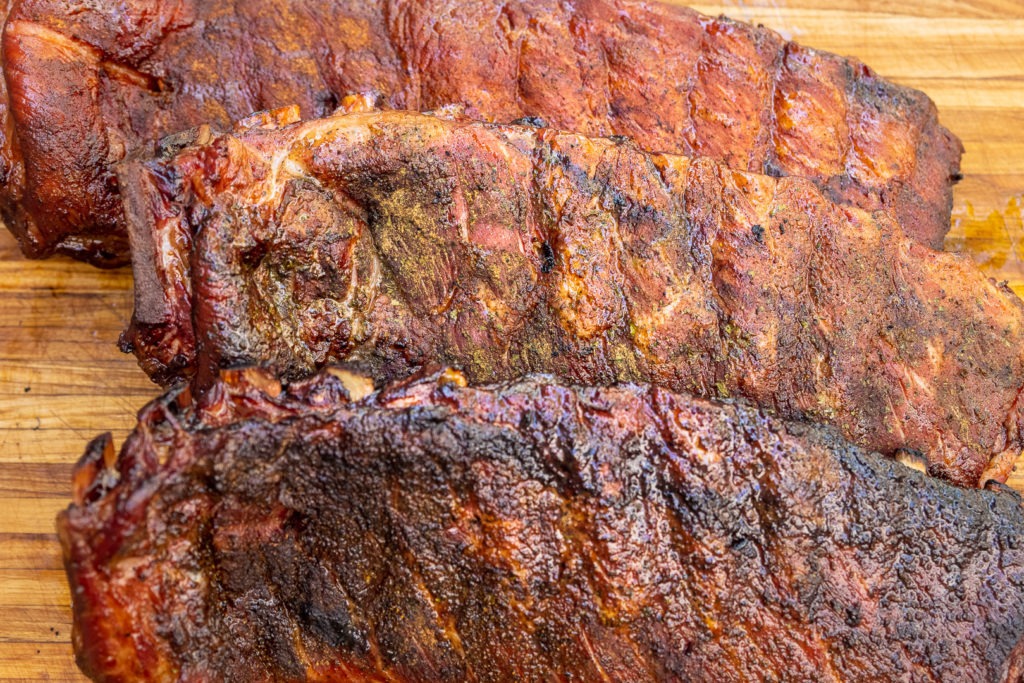