Outside the realm of the Reuben sandwich and the occasional hash, most people think of corned beef as a dish for St. Patrick’s day. But that needn’t be so! Amazing corned beef has a place on your table all year long, and we have the time and temperature tips to be sure your corned beef is as flavor-packed, tender, and juicy as it can be. So grab a Thermapen® Mk4 and let’s make this tasty dish!

( This method also works for a homemade pastrami!)

History of Corned Beef and Cabbage:

Corned beef is Irish…kind of. It’s an iconic meal that was developed out of necessity by early Irish immigrants. Before immigrating to the United States, a typical meal for an Irish family would have been cured pork with potatoes. After traveling to the U.S. in the 1800s, cash-strapped Irish immigrants found that pork and potatoes were far too expensive.

The Irish immigrants shared neighborhoods and shops with Jewish immigrants who didn’t sell pork in their butcher shops, and who had learned to cure cheap cuts of beef. The Irish took the cured beef brisket and boiled it with cabbage rather than potatoes to create hearty meals. Corned beef and cabbage may not have originated in Ireland, but it’s authentically Irish-American. A great dish to celebrate Irish-immigrant heritage!

People often ask about the corn in corned beef. And the truth is, there is none. The “corn” in corned beef comes from the coarse-grained salt that was originally used to cure the meat. These kernels of salt gave the name “corned” to the beef, with the word corn not referring to a specific grain, but to the old word for anything the size of a grain. So that’s why there’s no corn in the dish!

Corning is a common term for the method of curing meat with salt. And while preserving meat by way of salt-curing has been in practice for centuries (the chemical composition inhibits bacterial growth), we mainly cure meat now for the flavor and texture qualities inherent in the process.

To properly cure a brisket for corned beef, Prague powder #1 (pink curing salt) is an essential ingredient. The sodium nitrite slowly decomposes into nitric oxide, which reacts with myoglobin in the meat to create the pink color of the brisket. This reaction is also what gives cured meat its slightly tangy flavor.

Curing salt is pink to distinguish it from table salt. The chemical reaction during curing is what turns the meat pink, not added pink coloring.

A note on brisket

Beef brisket is one tough piece of meat. This cut is from the pectoral muscle and is heavily worked from bearing much of the animal’s weight. Protein fibers of weight-bearing muscles are very tough and are held together with a web of connective tissue that is primarily comprised of collagen.

The cut’s tough texture and connective tissue require it to be cooked slowly and held for a longer time at a higher temperature to adequately break down the collagen, transforming it into gelatin. Once gelatin is formed, it can absorb six to ten times its weight in water. Gelatin is essential in arriving at the desired moist and silky texture so commonly associated with tough cuts like brisket and pork shoulder.

Why time and temperature matter for cooking corned beef:

For food safety, the meat’s internal temperature only needs to reach 145°F (63°C), but collagen doesn’t begin to dissolve until 160-180°F (71-82°C). Heat applied to the protein needs to be low and slow to keep it tender, but the tender protein won’t matter unless the connective tissue has rendered down to perform its silky magic. For optimal collagen breakdown and gelatin development, we recommend cooking brisket to an internal temperature of 190-205°F (88-96°C).

We used a Corned Beef Brisket recipe from Kenji Lopez-Alt of Serious Eats.

A note on curing salt: curing salt is to be added by the weight of the meat. For every 5 lb meat, use 1 tsp curing salt. WEigh your brisket, then make the conversion for how much salt you need. Too much curing salt can be toxic, so don’t just assume that if some preserves it, more will do better. 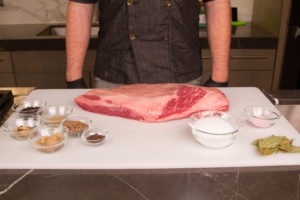 Now that the corned beef is cured, it’s time to cook it. But how? The traditional means of preparing corned beef is to put it in a pot and boil it all day, adding cabbage, carrots, and potatoes in the last 40 minutes or so. Thus it has been for generations. Of course, previous generations were notorious for overcooking vegetables, and they also didn’t have the benefit of high-precision thermometry!

Why boiling hard all day works

As we said above, brisket is tough meat, chock-full of connective tissue. All that collagen makes for chewy corned beef if it isn’t broken down into gelatin, and the long hard boil will get the meat up into the collagen-melting temperature range —above 160°F (71°C)—it needs to turn that hard, chewy collagen into soft and yummy gelatin.

If you’ve ever smoked a brisket, you are familiar with the dreaded ‘stall.’ This phenomenon occurs when the collagen in the brisket starts to break down, releasing water. As the water evaporates in the heat of the smoker, it acts as perspiration and cools the brisket so that the temperature doesn’t rise, sometimes for many hours, and won’t stop until enough water has exited the meat to allow the temperature to rise again. Bother.

Cooking the corned beef by boiling it avoids the stall altogether. If the beef is covered in water, there is no evaporation, and therefore no cooling. The only route for heat to escape the water directly is through the surface, and a flame under the pot keeps enough heat going in that the relatively small amount of heat venting out the top doesn’t hinder your cook.

Putting a slab of beef in a big pot and hitting ‘go’ is about as easy as cooking gets. Busy immigrant families probably thought of this as an ideal way of cooking (except for the cost of fuel for an all-day stove flame) if there were other things to be done.

We all know you can overcook a steak and dry it out—let it hit 150°F (66°C), and you may as well give it to the kids, who don’t know any better. And while brisket can take a much higher temperature, it too can be overcooked. If all the collagen turns to gelatin, that’s good, but if all the gelatin cooks out of the corned beef, you’ll just have a crumbly, dried out piece of salted beef.

Also, boiling meat hard all day is going to leach flavor out of it, leaving it a pale shadow of what it could have been.

What would the ideal method be?

In researching how to achieve corned beef perfection, we looked closely at what J. Kenji López-Alt had to say on the subject. After multiple cooks for multiple times and multiple temperatures, Kenji reported the best method for his taste preference was to cook the corned beef for ~10 hours at 180°F (82°C). This resulted in a texture that he liked best with a happy medium between structural breakdown and juiciness.

Mind you, that’s his preference. His experiments showed that you can get a flakier—though somewhat drier—texture by cooking the corned beef at a higher temperature for a shorter time.

Collagen breakdown is a function of time and temperature. Once you breach the threshold of gelatin creation—about 160°F (71°C)—the meat will begin to soften. But at that temp, it will take 36 hours to get tender! At 205°F (96°C), that time is reduced to a mere 3 hours. But because the total internal temp will have climbed so much higher, other protein reactions will have happened that make the meat flakier and drier.

How to cook corned beef perfectly

What we’re looking at here is a fine difference between tradition and modern science. The traditional method is a hard boil all day. This is a soft simmer for as little as 3 hours, but up to all day depending on your textural preference.

You could use a slow cooker. Every slow cooker is different, and they all try to maintain different temperatures. If yours keeps a temp that you like for the cook, go for it. But the ThermoWorks demo kitchen doesn’t have a slow cooker, so we broke out the thermometers and rigged up our own system!

We put our beef in the pot and covered it with water. Then onto the stove it went, and we started to monitor the temp once it started to visibly simmer. We tried to maintain a water temp of ~195°F (91°C) to balance texture and speed. Because we were taking a more scientific approach to this cook, we used a SmokeTM dual-channel thermometer and a Pro-Series Waterproof Needle Probe to monitor both the temperature of the water and the internal temperature of the corned beef. We wanted to know exactly what was going on with the beef temperature, etc. But if you don’t have a Smoke or ChefAlarm when you cook yours, sporadic monitoring of your water temperatures with an instant-read like the Thermapen® Mk4 will also work.

What temperature is corned beef done?

Using the Smoke’s receiver is nice for this, as you don’t have to be by the pot to know what’s going on. But until the internal temp of the beef and the temp of the water start to equalize a bit, there’s going to be a lot of back-and-forth on your stove heat to maintain the temperature you want.

Once your corned beef reaches the internal temperature you want, it will still need to have time for the collagen to break down. Our target temp was 190°F (88°C), and it took 2 hours after reaching that temp for the meat to reach the consistency we wanted. Yours may take more time depending on your temperature and texture preference.

How to Cook Corned Beef 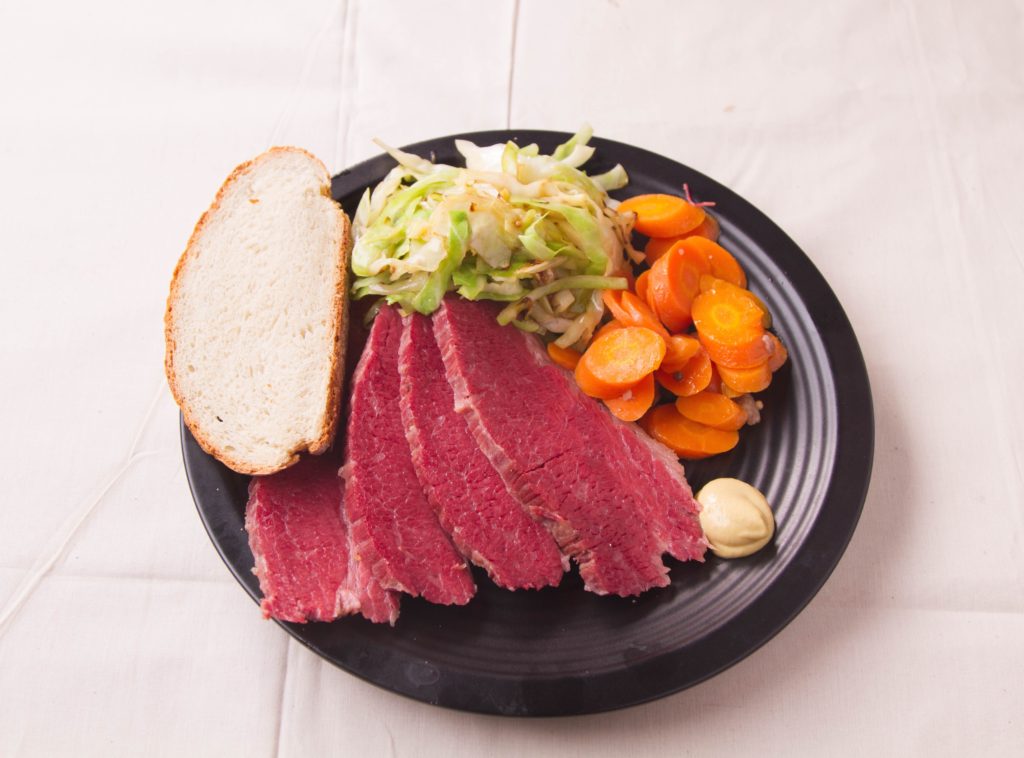 And there you have it! Home cured, carefully cooked corned beef is far better than the commercial stuff you have tried before. And with our temperature hints and a Smoke or a Thermapen Mk4 you can get exactly the corned beef texture you like!