People tend to get a little hyperbolic about steak. It’s easy to bite into a properly cooked steak from good quality meat and declare “this is the best steak I’ve ever eaten.” I’ve said it for at least 15 steaks. And it was true of all of them. In fact, the best steak you’ve ever had really can be the steak right in front of you every time, if you know how to cook it right!

That’s why my go-to steak is usually the New York Strip. Of course, I sometimes splurge and get the über-tender filet mignon or the rich and meaty ribeye, but time and time again, I reach for the strip and walk away happy. Why? because beefy flavor that is cooked properly and has those delicious Maillard-reaction flavors is great no matter how expensive the cut. In today’s post, we’ll go over how to properly grill a New York strip to perfection, with a thermal explanation of the process.

Strip steak: what is it?

The strip steak is from the strip loin (a section of the short loin) of the steer. 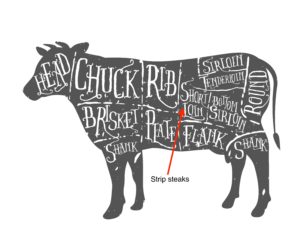 This group of muscles, much like the rib loin, is seldom used by the cow—which means it has less connective tissue and is naturally more tender than cuts from, say, the legs or the breast of the animal (i.e. the round or the brisket). That’s why they make good steaks: they can cook quickly and don’t need to be heated to collagen-melting temperatures to make them chewable. That’s why they’re so tasty medium-rare or medium—130–135°F (54–57°C) or 135–145°F (57–63°C).

How to grill a New York strip steak

How to grill a NY strip depends in part on its thickness. If you have a thick, thick steak (greater than 1.5 inches), you need to cook it with a two-stage method, preferably with a reverse sear. The reason for this lies in the temperature gradients. If you were to cook a large steak over direct high heat, there would be so much heat pumping into the steak’s edges that by the time you get the center of your steak up to your pull temp, the outside of the steak will be overcooked and dry. Bringing the steak slowly up to temp decreases the range of the temperature gradations, allowing you to bring the center temperature up to the proper level without overcooking the exterior.

However, if your steaks aren’t too thick (less than 1.5 inches), you can go ahead and cook them over direct heat without too much worry. Mind you, you’ll need to attend to them and monitor their temperature carefully with a fast and accurate thermometer, like the Classic Super-Fast® Thermapen® but you can certainly go for the direct sear. To show how these two methods worked on mid-thickness steaks, we cooked two of them next to each other and compared the results.

We started with two strip steaks which we salted and peppered. We placed one steak on the indirect-cooking side of the grill, probed with an available 2.5″ attached to a ChefAlarm® with the high alarm set to 100°F (38°C). The other steak we kept in reserve.

Once the slow-cooking steak reached 80°F (27°C), we put the second steak on the direct-cooking side, turning it as it seared and cooked. When the slow-cook steak reached the target 100°F (38°C), we removed the probe (they aren’t suited to the kind of high heat grilling we were doing) and moved it to the direct heat side. We monitored both steaks by probing them occasionally with a Thermapen until they reached the pull temperature for medium, 130°F (54°C).

When we pulled them and cut them open—after allowing them to rest—both steaks were a beautiful medium-rare. The fast-cooked steak had a bit of a better crust on it, and which was desirable to most of our tasters, despite a slightly greyer edge.

So to sum it up, below is a recipe for the steaks—cooked both ways—and we’ve thrown in some simple grilled veggies to round the dinner out.

If cooking steaks via two-stage method:

If cooking steaks over direct heat:

To cook the vegetables (this can be done while the steaks rest or while they cook):

Serve the steaks with the grilled vegetables and enjoy the taste of summer. How you choose to cook them don’t matter at this thickness. Ultimately, both methods work very well—it’s just a matter of how you want your cooking experience to go. If you have a lot of steaks to cook, starting them all slow and then finishing them quickly can take a lot of stress off, while allowing you to leisurely sip a beverage of some kind while you wait. If you want a little bit more crust on your steak, direct heat may be for you.

And while the ribeye may be the king of steaks and filet the king/emperor, there is still nobility aplenty in the classic New York Strip. Will a properly cooked NY strip be the best steak you’ve ever eaten? It won’t be the tenderest (filet) or the richest (ribeye) or the manliest (porterhouse), but if you cook it right and control the doneness with a fast and accurate thermometer, like the Thermapen, you aren’t going to care about those other steaks. You’re going to be too busy enjoying the best steak you’ve ever eaten right now.