In his book, Cooking for Geeks, Jeff Potter calls sous vide, “…one of the biggest culinary revolutions to hit the commercial cooking scene in the past few decades…”

Sous vide (pronounced SOO-VEED) translated means “under vacuum.” Michael Chu, author at CookingforEngineers.com says, “…it is rumored that the origins of sous vide cooking in restaurants began in France during the 1970’s where George Pralus pursued this technique as a way to reduce product loss when preparing foie gras.” Chu says food cooked using the sous vide method loses less than 20% of its weight, while food cooked using the more traditional methods (e.g. frying, roasting, grilling) typically results in a 30% reduction in weight. The reduction in product loss comes as a result of the method in which the food being cooked is packaged (under vacuum), and the lower cooking temperatures. The result is a significant reduction in water and fat loss.

Is it really revolutionary? Consider this, Food Scientist, and author of the Modernist Cuisine collection, Nathan Myhrvold, says, “The sous vide method yields results that are nearly impossible to achieve by traditional means.”

Sous vide cooking allows an inexperienced home cook to prepare (perhaps of the first time, ever) a perfectly cooked medium-rare steak. All it takes is a little understanding of chef recommended doneness temperatures.

Myhrvold says, “Precise temperature control and uniformity of temperature has two other big advantages. First, it allows you to cook food to an even doneness all the way through; no more dry edges and rare centers. Second, you get highly repeatable results. The steak emerges from the bag juicy and pink every time.”

Time is another advantage to sous vide. Some may look at the increased time as a disadvantage, after all, a medium-rare steak (done in 10 minutes on a range) can take as much as an hour and a half when cooking sous vide. “But,” Chu says, “the type of time it uses can be seen as an advantage.”

For most of the cooking, the home cook is not actively engaged. In fact, it’s possible to leave the food in the water bath for hours while you attend to errands and other daily chores. The laws of thermal physics make it impossible for your food to overcook should you leave it in the bath for too long. As Potter says, “…since the temperature of the water bath isn’t hotter than the final target temperature, the food can’t overcook.”

This juxtaposes traditional cooking where, Myhrvold says, “…there is little margin for error.” “With just a moments inattention,” he says, “conventional cooking can quickly overshoot perfection.”

Uniform doneness is another huge advantage to sous vide cooking. Potter says, “The reason sous vide is so, well, amazing is that foods cooked this way have no gradient of doneness and the associated overcooked outer portion. Instead, the entire piece of food has a uniform temperature and uniform doneness.”

This is especially useful when cooking meats and seafood, “…for which,” Myhrvold says, “the window of proper doneness is often vanishingly small when traditional methods are used. When you fry a piece of fish, the flesh is most succulent and tender within a very narrow temperature range. Because the cooking temperature of the pan is at least 392°F (200°C) hotter than the ideal core temperature of the fish, the edges will inevitably be far more cooked than the center when pan-fried.”

How do you do it?

“…the defining feature of the sous vide method is not packaging or vacuum sealing, it is accurate temperature control.” – Nathan Myhrvold

Recent advancements in immersion circulation technology, have taken sous vide cooking out of commercial kitchens and made it available for home use. High-end circulators, like those from PolyScience have found their way into the kitchens of serious home cooks, while less expensive models like those from Anova One, which happens to be an America’s Test Kitchen favorite priced at only $199.00, have brought sous vide into the mainstream.

Circulators allow you heat your water to a precise temperature and keep it there for an extended period of time. The Sous Vide Professional from PolyScience boasts a ±0.13°F accuracy. Less expensive models, like the America’s Test Kitchen Winner, Anova One, maintain water temps to within ±0.2°F.

[Tweet ““…the defining feature of the sous vide method is not packaging or vacuum sealing, it is accurate temperature control.” – Nathan Myhrvold”]

If you don’t have a circulator, it’s still possible to cook using the sous vide method. Alexis Ainouz, the face of “The French Guy Cooking,” shows us how to uniformly cook a steak with nothing more than a zipper storage bag, thermometer, beer cooler, and a lot of guts. Just remember what Myhvold says, “…sous vide is not packaging or vacuum sealing, it is accurate temperature control.” As long as you control the temperature of the water, you can create perfect results – every time.

If you’re adventurous enough to try the beer cooler method, arm yourself with a few fast and accurate thermometers. The ChefAlarm is ideal for monitoring the temperature of your water as your food cooks. Insert the probe into the water bath and set the low alarm to sound when you’ve breached your low temperature threshold.

If you’re cooking a steak medium-rare, the temperature of your water should hover somewhere between 130-140°F. You may suggest that 140°F is high for medium rare, but keep in mind over the course of one to one and a half hours of cook time your water will cool. Starting at 140°F will allow your water the ability to settle between 130 – 135°F (perfect medium rare).

If you’re working with a second thermometer (or a meter with two probes), insert the probe into the vacuum bag, or zipper storage bag with the aide of foam tape. This will keep the punctured bag from taking in water. Set your alarm to sound when you’ve reached your target temp and you’re all set. 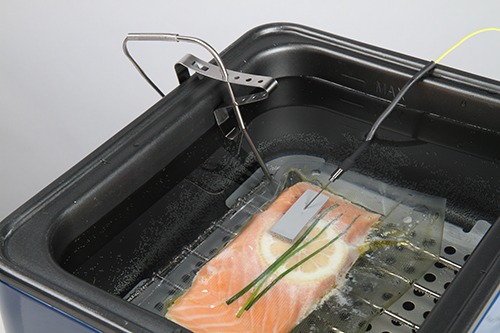 Also keep in mind that carry over cooking is a non factor when cooking sous vide. Thermal equilibrium will not allow the food you’re cooking to get any hotter than the water it’s being cooked in. This again reaffirms Potter’s claim that, “the food can’t overcook!” (exclamation point added for emphasis!)

Potter sums up sous vide perfectly when he says, “…this cooking technique sounds foreign…” “But,” he says, “While foreign in origin, it is certainly not complicated or mysterious.” All that’s required are precise temperatures.