You are here: Home / Pork / Potstickers for Your Feast: Temps You Need
Jump to Recipe
Author: Martin Earl

When the Bumpus hounds destroyed the Parker family’s Christmas turkey in A Christmas Story, the family did the only sensible thing they could: they went out for Chinese food. The relationship between Christmas dinner and Chinese foodgoes back much further than the 1950’s, and it has become, in its own way, a staple of American Christmas culture.

Well, if you’d rather eat in than dine out this Christmas, we can help. We’ve already shared a terrific recipe for General Tso’s chicken, but one dish does not a Christmas feast make. A proper feast wants dumplings, 1 and we have the tips you need to make them right and to make them safe.

Books can be and have been written on the subject of Chinese dumplings, and this isn’t going to come anywhere close to doing the whole subject justice. There are dozens of kinds of dumplings, if not hundreds, from the various regional cuisines of China. While some varieties are eaten only for special occasions, there are many that are part of the every-day, street-food scene of modern China. They can be filled with meat, vegetables, fish, bean pastes, or even sweets, and they come in a variety of shapes.

Here, we’ll focus on Chinese jiǎozi (pronounced jeeOW-tzuh), or, as we often (and sometimes erroneously) call them, potstickers. These dumplings can be filled with nearly anything—though they are often filled with pork or lamb—and are often eaten with a soy-based dipping sauce. They can be boiled, steamed, even deep-fried. They are often made from hand-rolled wrappers with thicker, doughier walls than those made with pre-made dumpling wrappers—a step we won’t be taking in this recipe. (Japanese gyoza are descended both culinarily and linguistically from jiǎozi but have thinner skins. Gyoza wrappers are often what are available at stores in America for wrapping dumplings.)

The version we’ll be cooking—technically called jiānjiǎo, fried dumplings—are properly what we call potstickers. Rather than steaming or boiling them, these are fried on one side in a thin film of oil, then steamed in the pan by adding a half cup or so of water and putting the lid on the pan while the water boils out. Once the water has cooked off, a little more oil is added to the pan to re-crisp the bottoms of the dumplings. If you don’t use a very well seasoned cast iron pan or a non-stick pan, you will learn why they are called “potstickers;” they will cook to the pan and not want to release. If you don’t have a pan that can pass for non-stick, use a little more oil during each frying step.

The version we present here is a bit of a mash-up, leaning slightly more towards the Japanese gyoza. (We combine methods and recipe parts from both SeriousEats.com and JustOneCookbook.com.) It includes Napa cabbage that has been chopped, salted and then drained (a step that decreases bulk in the final mix also thereby creating a better environment for even cooking), as well as finely chopped mushrooms and minced garlic. The filling can be infinitely played around with: substitute kimchi for cabbage, swap out leeks for green onion, use chicken instead of pork…you get the idea.

Depending on the size of wrappers you use for your dumplings, you will only be putting a couple of teaspoons of meat filling into your potstickers, and that meat will cook quickly. But that meat is also ground, and that means there is an elevated chance of food-borne pathogen infection. Just because they’re small doesn’t mean they can’t be undercooked! As with all ground-meat dishes, it’s important to cook your pork dumplings to a full 160°F (71°C), and the Thermapen® is both accurate enough and has a small enough sensor to check such small packages of deliciousness.

No matter what you’re making a Chinese feast for, it’s worth taking a little extra prep time to make a batch of these delicious little morsels. They’re savory, rich, and so fun to eat that you’ll lose track of how many you’ve had. But, if you use your Thermapen, at least you’ll know they’re safe.

Note: These freeze very well. Take a Saturday afternoon and make up a double batch, then freeze them on a sheet tray and bag them up for later use. You can cook them the same way, but it will take a little longer. You may need to do the steaming step twice. Dumplings on demand is a great way to live your life!

Also, folding the dumplings can seem daunting until you “get it,” but it isn’t hard. You can check out the tutorial on JustOneCookbook, which helped me to learn. In the end, though, how they look doesn’t really matter! As Andrea Nguyen, author of the wonderful Asian dumplings says, “Get the wrapper closed. Practice pretty shapes later.”

Based on methods and recipes from SeriousEats.com and JustOneCookbook.com.

For the dipping sauce 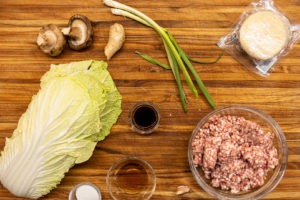 Make the dipping sauce by combining all the sauce ingredients. Set aside. 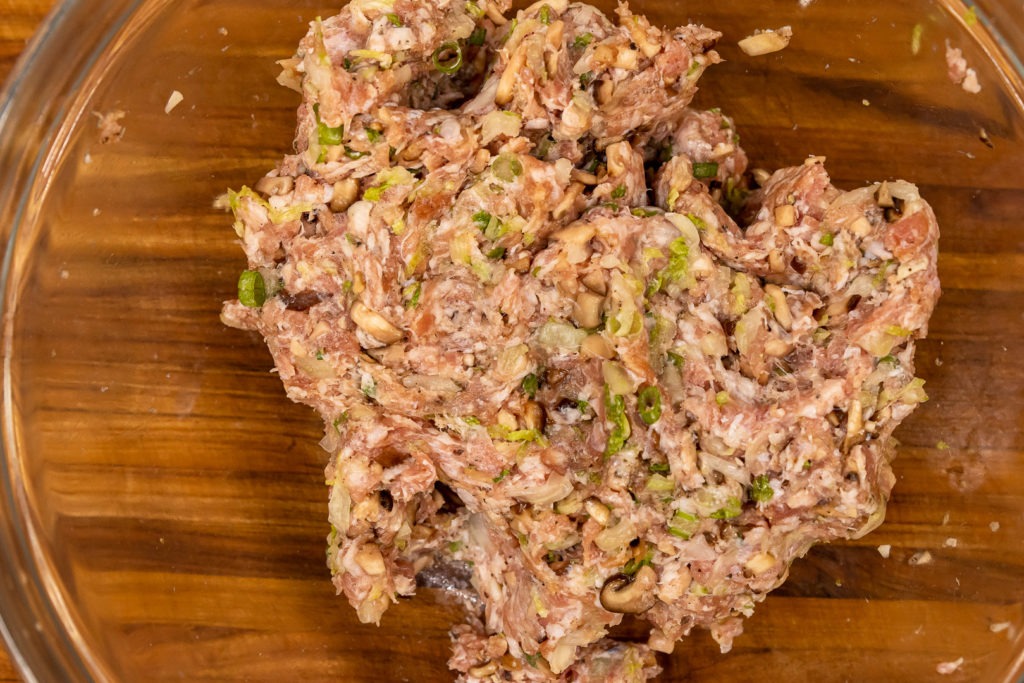 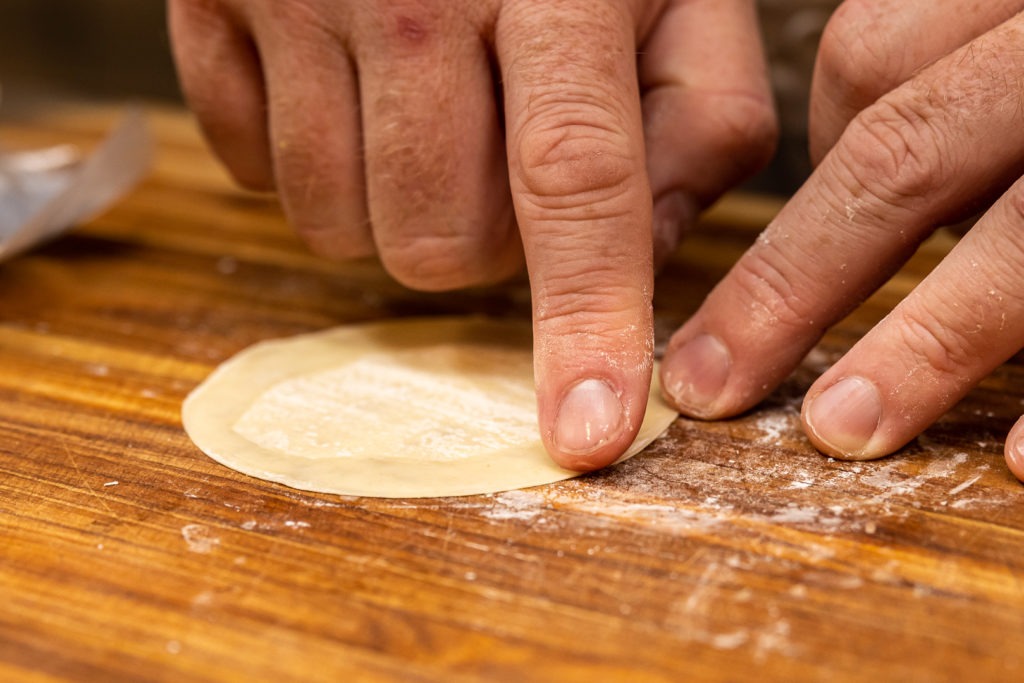 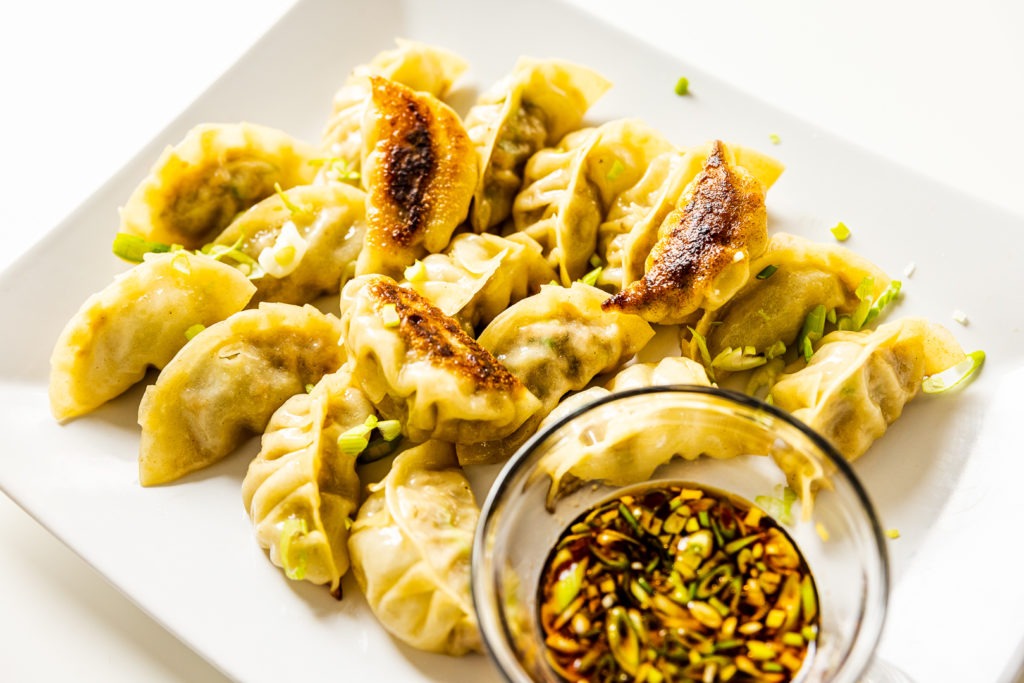 Note: you can cook these by other methods, too. Steam them or boil them carefully for a couple minutes. Just be sure to check the internal temp for proper doneness!