I obviously love to cook, right? But I don’t always cook at home. No, I too, trained in the cheffing arts though I am, often succumb to the siren call of takeout. Lately more than ever, with restaurants all in need of our support.

And no version of takeout or delivery makes me happier than good Chinese food. And by good Chinese food, I really kind of mean bad Chinese food. The delivery from the hole-in-the-wall place in the rundown strip mall. That is often where the greats hide: spicy beef, packed to the gills with sliced fresh chilies; egg foo young with rich veggies and sauce; and of course, that staple of American Chinese food, General Tso’s chicken.

Here we’ll walk you through making a truly stellar version of General Tso’s chicken. I’m willing to bet that this version, made in your own kitchen, will outshine your local joint’s version hands down. And, despite its long ingredients list, it’s really not hard to make. You’ll need a Thermapen® to monitor the temperatures and a basic, simple wok won’t hurt, but once you understand how it goes, there’ll be no stopping you.

Now, the variations on General Tso’s chicken are myriad, and many of them are delicious, so here we’ll go with the proven winner from SeriousEats.com.

What is General Tso’s Chicken?

What it isn’t is the favorite dish of a famous Chinese General from the Qing dynasty. Though the origins of the dish are shrouded in the same provenance-obscuring fog as almost all great dishes, with multiple claims creation from multiple sources, there is no credible claim that this dish was ever eaten by Hunanese general Zuo Zongtang, Marquis Kejing. Every credible possible source puts the origin of General Tso’s chicken squarely in the U.S.A.

I could go on for days about what it means for a dish to be authentic and why that does or does not matter, but let me sum it up like this: American Chinese is its own cuisine, complete with it’s own norms, shared recipes, standard ingredients, and expected outcomes. This dish is not authentically Chinese, but it is authentically Chinese American. And it’s delicious.

How to make General Tso’s chicken

There are three things that we need to get right to have a stellar General’s chicken: the breading, the sauce, and, of course, the chicken itself.

One thing that turns me off of a takeout place is dry, stringy chicken. For juicy, tender chicken, there are two secrets. One is to use dark meat for the dish. Boneless skinless chicken thighs are not only cheaper and more flavorful than breast meat, but they are much more forgiving when being cooked. Breast meat is delicious in about a 5-degree window, while thigh meat has about a 25-degree window of deliciousness. And that brings us to the second secret: When it’s time to cook the chicken, cook those thighs to at least 175°F (79°C).

Thigh meat has connective tissue, and that tissue needs to break down, and that happens at around 175°F (79°C). Below that temp, thigh meat is rubbery and gross. At that temperature, it becomes tender and succulent, and, by the good fortune of biology, it remains tender until about 200°F (93°C). Using a fast and accurate thermometer with a small sensor, like the Thermapen®, allows you to temp each bite-sized morsel as it emerges from the oil, ensuring each one is properly cooked.

For maximum flavor, we need a breading that is itself infused with flavor. Plain flour just won’t do! Most Chinese food breading has a high quotient of starch in them, and this will follow suit, but the chicken will first be bathed in a flavorful marinade. The breading itself, with all that starch, will also have some of the marinade mixed in with it, making the final texture craggy and crunch. (This is similar to the technique used in our post on chicken fried steak.) This breading makes chicken that is good enough to eat even without sauce, and it does wonders for the final dish.

The sauce here is simple. Aromatics—ginger, garlic, scallion, chilies—are stir-fried together, then doused in a bath of soy sauce, Shaoxing wine (or dry sherry), some sesame oil, and rice vinegar with a hit of sugar (sure sign this is Chinese-American food) and some corn starch to thicken it. It can be made in the same wok or pan that you fried the chicken in, after pouring off all but a tablespoon or two of oil the hot oil, or you can make it in a separate pan while you fry the chicken. It’s remarkable how simple it is, and when you try it you’ll be amazed at how restaurant-y it tastes.

Bringing the dish together

Once the chicken is fried and the sauce is made, simply toss them together over heat and serve the dish over steamed white rice.

Frying temp for the General’s chicken

Of course, there is the hinted-at matter of the frying itself. I love to use a wok for the frying step. Because of its rounded bottom, a smaller amount of oil is needed to reach the same depth in a wok as in, say, a Dutch oven. You can certainly use any frying vessel you like, but a good wok is relatively cheap and super effective for fast frying of foods like this. A pot clip can be hard to attach safely to a wok, so I use a Thermapen to check the temperature at regular intervals during the pre-heating and frying stages. The target temperature for the oil is 350°F (177°C), a temperature that is hot enough to cook the chicken without scorching the breading. The Thermapen can read the oil temperature with astonishing accuracy and speed so you can know what’s happening in the oil at any given moment.

This recipe is not a small one from an ingredients-list perspective. There are ingredients for the marinade for the meat, for the breading, and for the sauce. It’s a multi-stage cook including a fry-cycle. But you shouldn’t be intimidated by it. The recipe has a lot of steps, but none of them are particularly tricky. Have everything ready to go before you begin, and the steps lead right into each other. The recipe moves quite quickly once you get started, and before you know it you’ll have fresh, hot, sweet/savory chicken. I’d have the rice already cooked before you start cooking the chicken so that it’s all ready to go at the same time.

Based on The Best General Tso’s Chicken Recipe by J. Kenji López-Alt on SeriousEats.com

For the Dry Coating 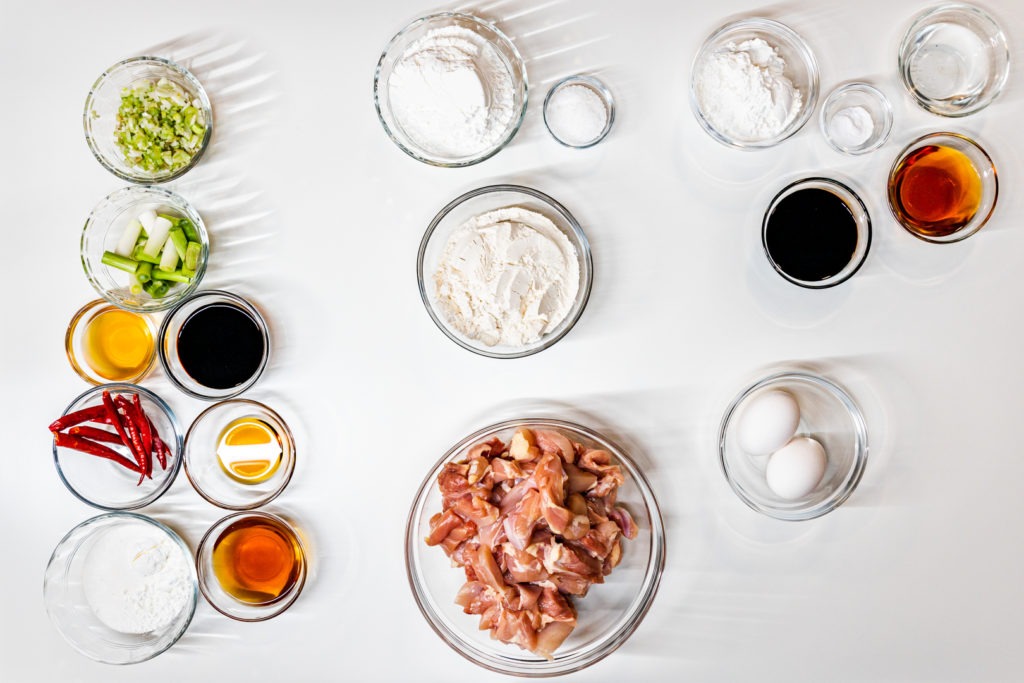 First, make the marinade and marinate the meat

Then prepare the breading 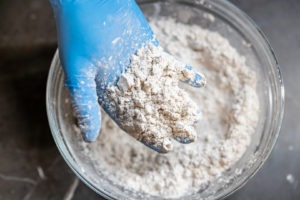 Prepare the ingredients for the sauce

Make the sauce and finish the dish 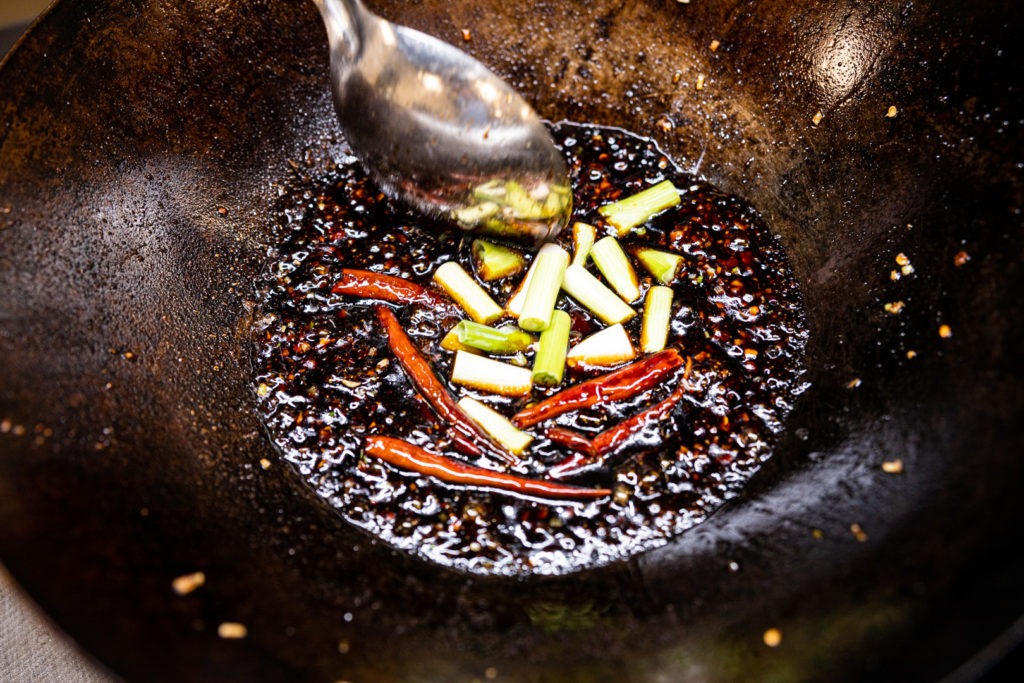 It’s not a one-dish meal, and it’s certainly not as easy as takeout, but it tastes so good that you might not want to go back to takeout on this dish ever again. This is delicious, warming, amazing food that you can be proud to make (temperature-perfect thanks to your Thermapen®) and to serve. Give the delivery person a break and make your own General Tso’s chicken. You’ll be glad you did.