Nothing says fall desserts like an apple crisp. The changing season, the falling leaves, the sweaters, the chill in the morning air, they all point to harvest and to apples and to warm meals with friends. What’s more, Steven Raichlen’s amazing smoked apple crisp recipe gives you an excuse to fire up your smoker and smell and taste wood smoke again this fall. It has bourbon. It has bacon. What’s not to love?

For this project, we heat our smoker hotter than we would for, say, a brisket, because we’re not looking for any low-and-slow enzymatically-induced collagen destruction in muscle fibers. We are just looking to cook some apples and gelatinize some starches. And get some smokey crisp topping, too.

The butter in the topping needs to melt and the crust needs to experience Maillard browning. That only happens at temperatures above 310°F (154°C). The proteins and sugars break down and rearrange themselves into ring-like structures. Flavor and aroma compounds are created, not just the brown color. We’ll get the smoker up to 400°F (204°C) before introducing the crisp. This will give us plenty of browning on top while the apples come up more gently to temperature.

While the crust needs temperatures above 310°F (154°C) to get crisp, the apples inside the crisp need to be kept below a critical temperature.

As the filling reaches 183°F, we reach a critical point. This is the temperature at which pectin begins to break down. When the mortar in a brick building beings softening, there’s suddenly nothing holding the bricks together. Cells collapse, liquid gushes out, and you’ve got apple sauce on your hands.
—J. Kenji Lopez-Alt

Apple pectin breaks down at about 183°F (84°C), turning the apples into applesauce. We want there to be some apple structure for our crisp, so we should shoot for a temperature below that. Combine that with the fact that the starch in the flour that will be thickening the sauce will gelatinize between 120°F-140°F (49°C-60°C), and we’ve got a target temp for our apple filling.

The filling will be insulated by the crust and take longer to rise in temperature, of course. We’ll be shooting for a pull temp between 140°F and 180°F (60°C-82°C) and no higher in the thermal center. To get this right we’ll be periodically checking our crisp with a Thermapen®. 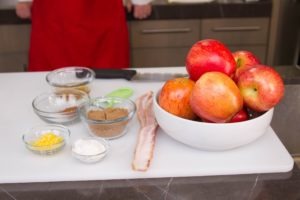 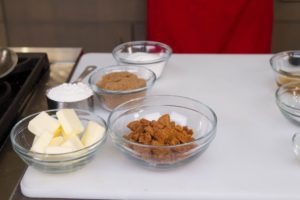 Luscious sauce and soft-but-not-mushy apples are yours with this unique recipe if you keep an eye on your internal temperature. The smoker’s higher heat works to crisp the topping while the apples have their starch gelatinized without destroying their pectin between 140°F and 180°F (60°C-82°C).

On Food and Cooking by Harold McGee