Tenderloin is the best piece of beef.

I know, I know…what about brisket? What about ribeye? What about tri-tip? Let me clarify. Beef tenderloin is the best piece of beef in that it needs the least doing-to of any piece of meat on the cow. Brisket needs 12+ hours of smoke to become transcendent, tri-tip wants some smoke, and ribeye needs at least to be grilled. But tenderloin? Heck, you could almost eat it raw. (People do! Looking at you, steak Tartar.)

So, here is a method for cooking that beguiling piece of meat that, though it seems complex to us now, harks back to ancient methods and needs no pans, no pots, no grills. Salt-crusted beef tenderloin (lomo al trapo) uses salt, herbs, and a cotton or linen cloth, and hot coals and that’s it. It’s primitive, it’s astonishing, it’s so, so good, and we’ll give you the temps you need to be aware of to make sure it comes out right. Sure, hyper-accurate and Super-fast® thermometers are a modern addition to this otherwise primitive recipe, but we don’t have to give up every modern tool, do we? Let’s get into it.

Not only is grilling in a salt crust a delicious way to prepare a beef tenderloin, it gives a very impressive presentation to a festive occasion. You get to crack open a charred packet in front of all of your guests to reveal a perfectly cooked tenderloin. You will need to sacrifice a dish towel to the effort, but it’s a great showy dish to prepare for holidays or whenever you have company coming over. And you won’t believe how delicious.

Why Cook in a Salt Crust?

Cooking in a salt crust is an ancient method that has been used by many different cultures. But what is it about this salt enclosure that makes it a desirable way to cook meat?

Grill roasting or oven roasting in a salt crust creates a sort of kiln, or an oven within an oven that roasts your meat. Some traditional recipes call for burying meat or vegetables in dry salt, while others pack the food in a salt paste held together with water or egg whites. Either way, the meat is surrounded by a mineral that affects its thermal properties in unique ways.

Heat Conduction: Salt molecules are made up of sodium ions and chlorine ions and are highly conductive. Packing salt around meat is a very efficient way to transfer heat energy around the entire surface of the meat and radiate it inward.

Heat Retention: Salt is also excellent at absorbing and retaining heat. Surrounding the meat entirely with salt creates an environment that cooks efficiently and evenly from edge to edge.

Insulator: At the same time, the salt is a barrier around the meat that protects it from the searing heat of direct contact with the coals.

Moisture Retention: Lastly, a salt crust around a cut of meat acts as a barrier to evaporation of water from the muscle fibers. Inside the salt kiln, the meat is steamed with its own juices—very little moisture is lost.

By packing foods such as fish, meats, or potatoes in a mound of salt, you ensure that the outer surface of the coked food doesn’t reach the same surface temperatures as it would if uncovered, leading to a less extreme gradient of doneness. —Cooking for Geeks, Jeff Potter

2. Flavorful and Juicy with a Tender Texture

All of the moisture, volatile flavors, and aromas remain inside the salt crust with this method, creating a finished product that remains remarkably juicy, with very intense, pure flavors. Many salt crusts have fresh herbs and other aromatics mixed into them. The inward direction of the heat transfer infuses the meat with the flavors in the crust.

The salt crust helps even out the heat transfer that would otherwise be rather extreme in this cooking situation, so compared with cooking caveman-style directly on the coals, there are less extreme temperature gradients. The more even heat transfer of a salt crust means less overcooked meat and fantastic texture as long as your critical temperatures are tracked correctly with accurate thermometry.

With powerfully intense heat moving inward from all sides of the salt-encased meat, it cooks faster—about 1/3 the time of regular grill roasting without the salt insulation.

Be warned, however, that the carryover cooking factor (the meat’s internal temperature rise after being removed from the heat source) is exaggerated with this cooking method. After being removed from direct heat, the “salt kiln” can retain and insulate the energy already in the muscle fibers of the meat very well rather than letting it dissipate into the air. We tried a few different methods of salt-crusted cooking with different types of meat in our demo kitchen, and we saw carryover cooking increase the internal temperature of the different cuts of meat as much as 31°F (17°C) while resting! (31°F [17°C] carryover was seen with a pork loin that was oven-roasted in an egg white salt crust, and rested in the salt crust for 20 minutes.)

Rather than pulling our roast at 125°F (52°C) as we would if we were slow-roasting the tenderloin in the oven, we’re going to aim for a pull temp of only 105–110°F (41–43°C)! The roast will carry over in its salt sarcophagus up to a lovely medium-rare. Use a fast and accurate thermometer like Thermapen® ONE to get the temperature just right. Believe me, when you temp this meat, you’ll want to get it temped fast!

Salt Crusting: Salt as a Tool, Not an Ingredient

But Wait! Won’t My Tenderloin Be Too Salty?

Not if done correctly. Keep reading…

With salt crust roasting, the salt’s purpose is to create an exterior shell that conducts, retains, and insulates heat throughout the cook. To ensure that your meat isn’t too salty, don’t salt it ahead of time.

Cook the meat immediately after packing or wrapping in salt. The meat will start cooking over the high heat before the salt has enough time to dissolve and penetrate the surface of the meat. After the meat is cooked and you crack and brush the salt away, the meat will be seasoned, but not salty.

Meat allowed to rest for eight hours in a salty crust before cooking loses a ton of its weight through osmosis, as its juices get pulled into the salt and eventually evaporate during cooking. Cut the crust open on a long-salted roast, and there’s a good half inch of space all around it that used to be occupied by meat. It also comes out inedibly salty. Make sure you cook the beef immediately after wrapping it. —Kenji Lopez-Alt, The Food Lab, Serious Eats

In other words, you cover it in salt right before cooking, ad it comes out just right. Leave it too long and it will certainly get too salty.

Note on searing and flavor:

Salt-crust roasting produces wonderful doneness and texture, but it does not develop a traditional sesared crust on the outside of the meat. We seared our tenderloin in a cast iron pan over high heat before encasing it in salt to give it a good savory crust in the final presentation.

This method of cooking a beef tenderloin in salt wrapped in a towel directly over coals is so much fun! ANd the results are exquisite. Give it a try this season. Get the towel, get the salt, get the grill going, and get your Thermapen. It will be delicious every time.

Lomo al Trapo: a Colombian method of cooking a beef tenderloin surrounded by salt, rolled in a cotton towel, and cooked directly on hot coals. 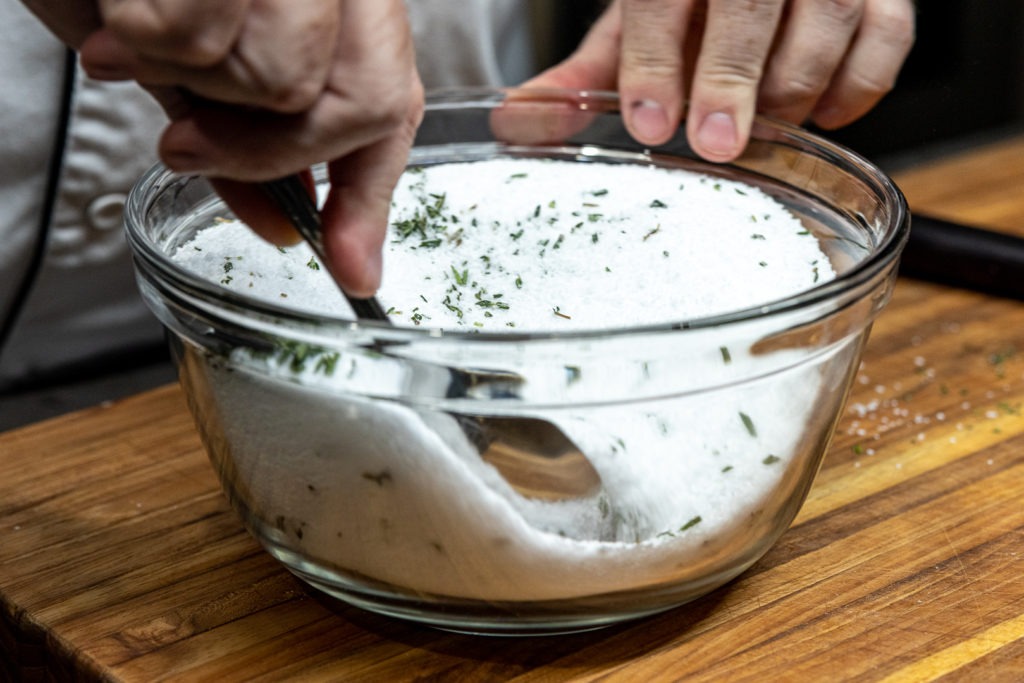 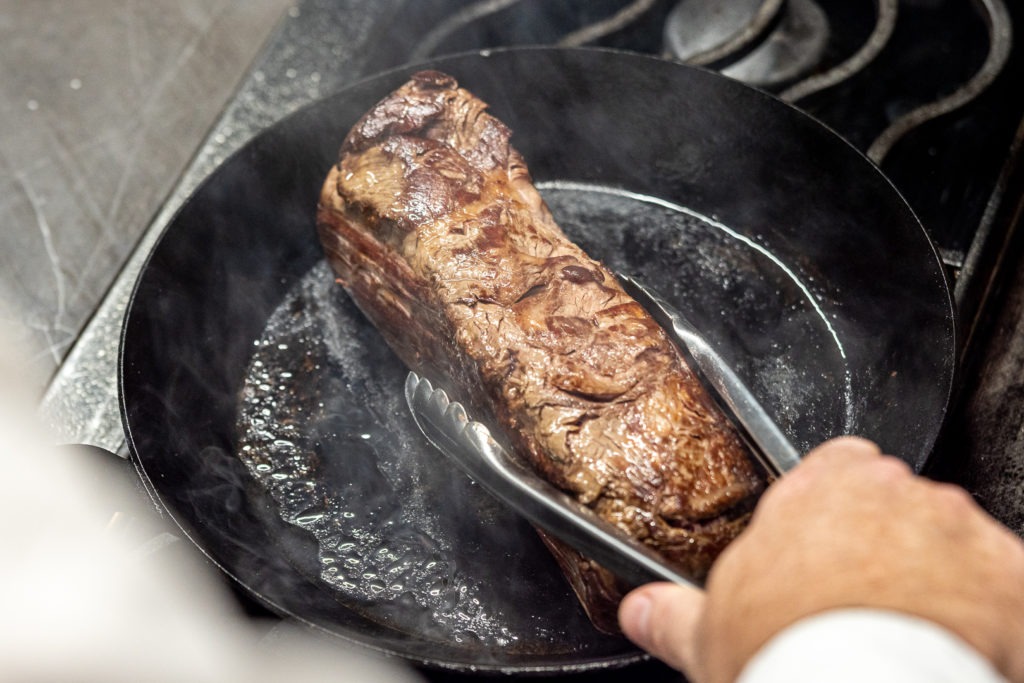 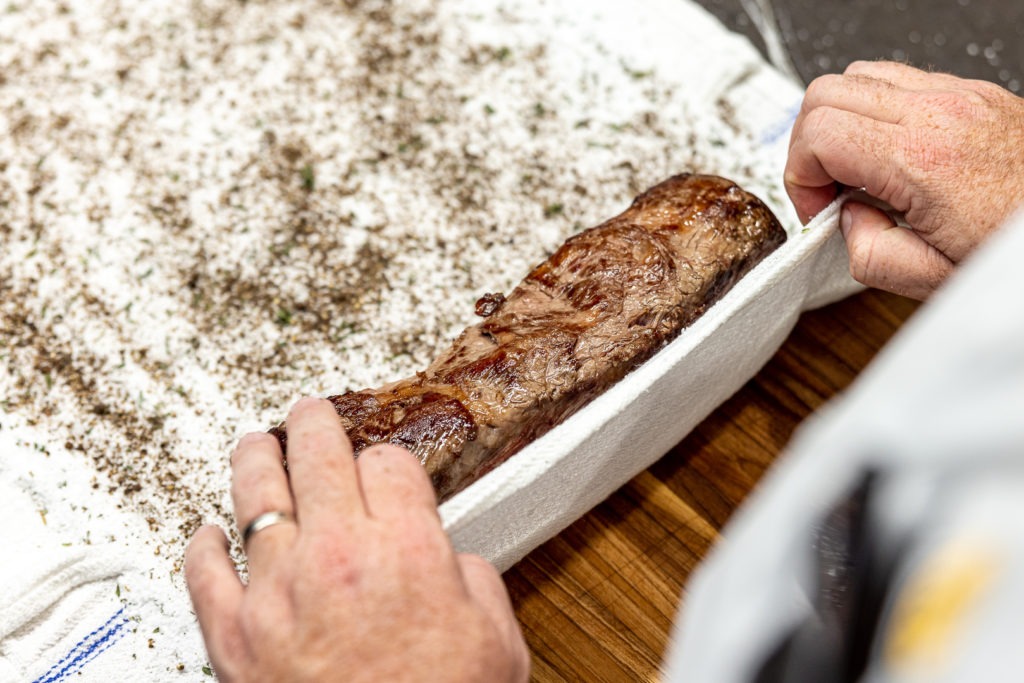 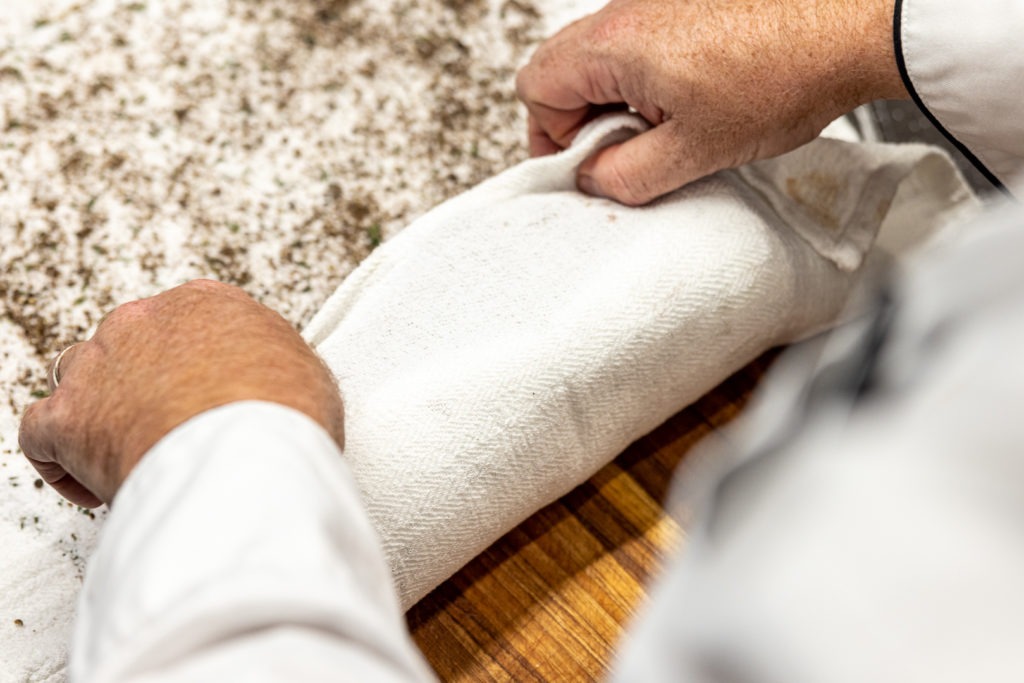 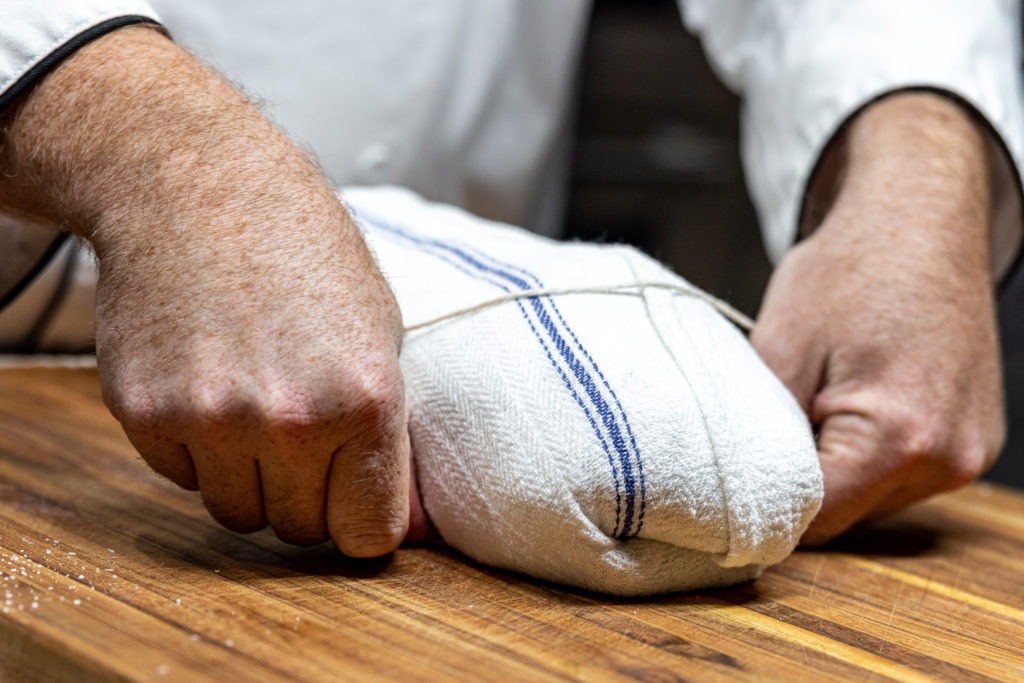 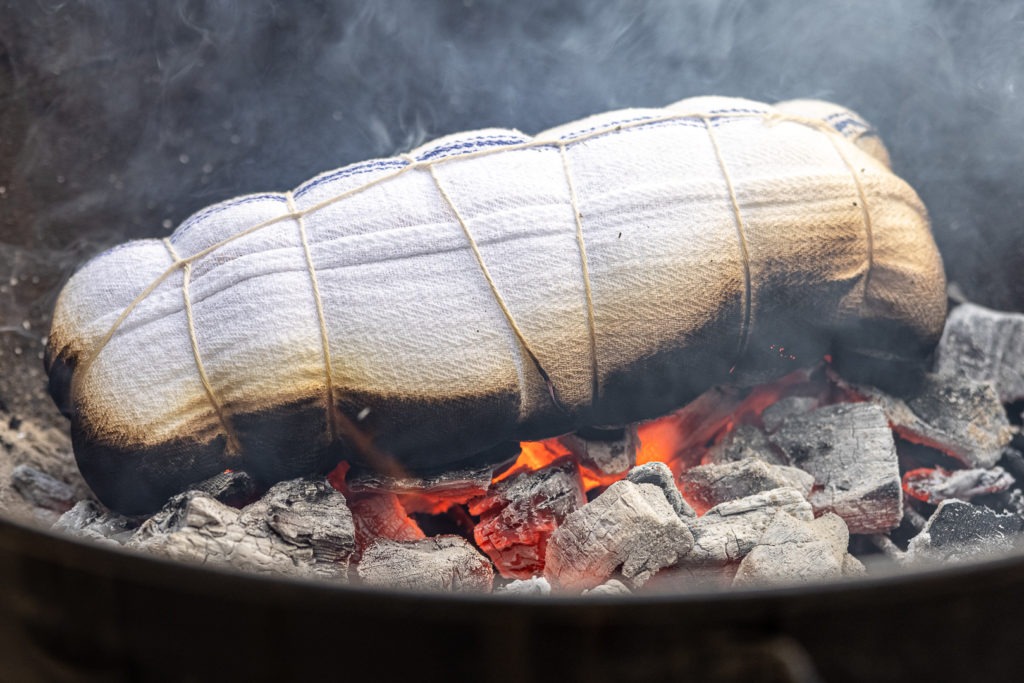 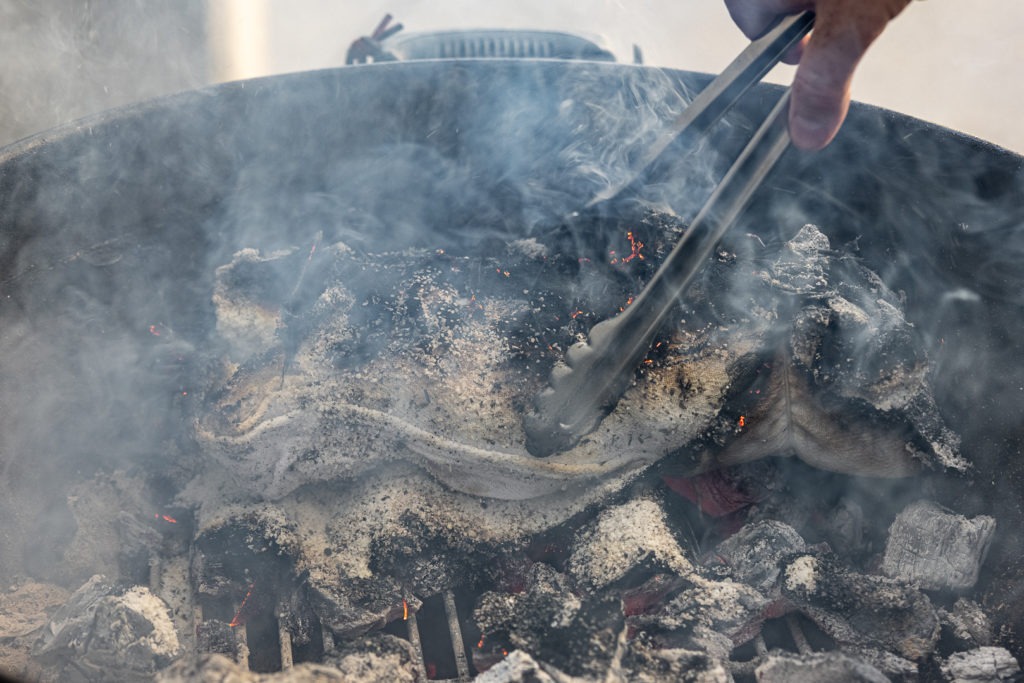 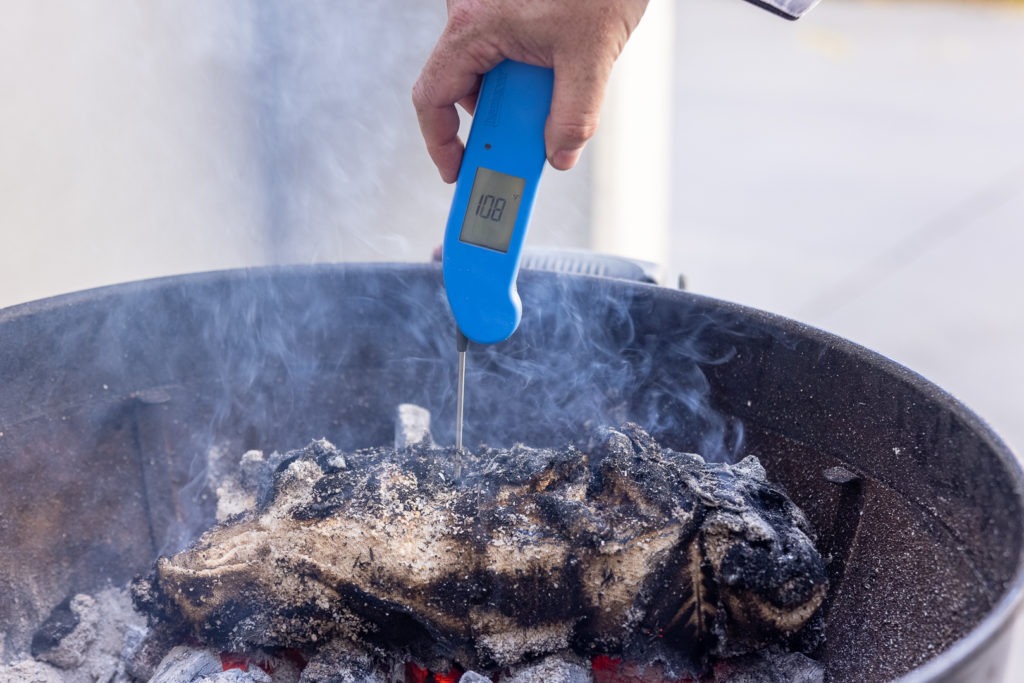 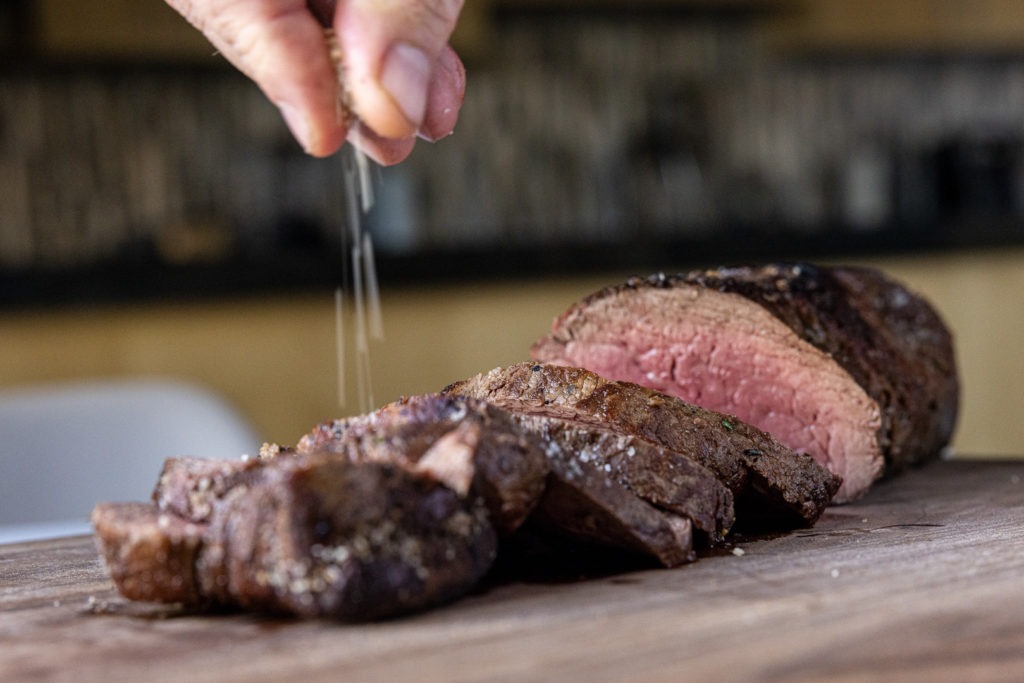