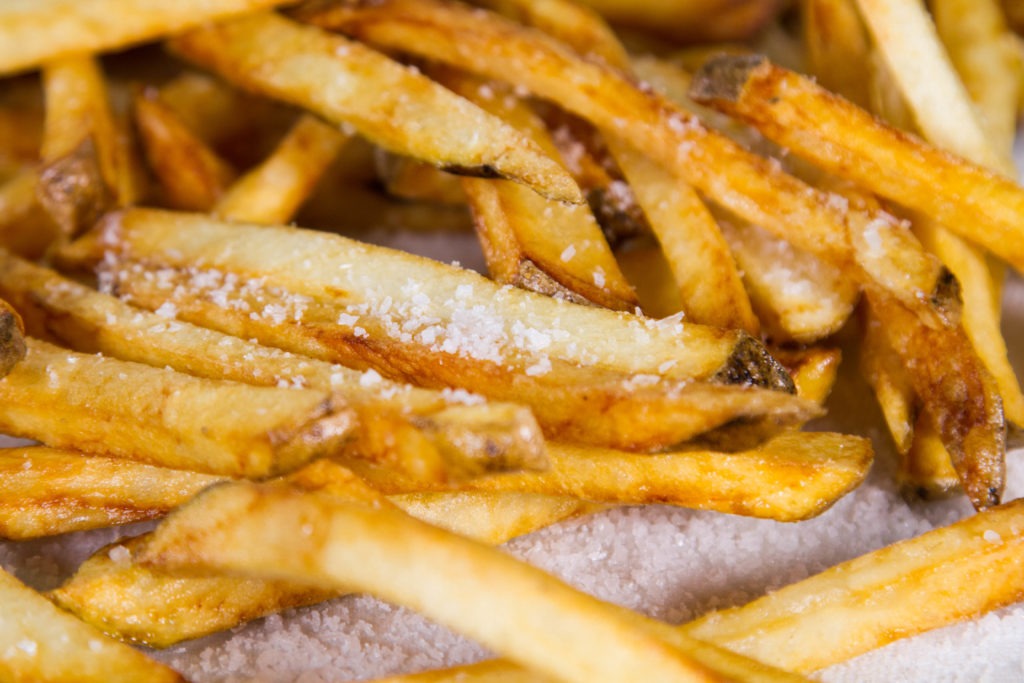 French fries. Pommes frites. Papas fritas. Chips. The golden crisp wands of wonder have found a home in cuisines around the world, and with good reason! They are crisp, hot, delicious, cheap (or at least they should be), and easy to scale up for quick service in restaurants. Plus they are a blank canvas, ready for painting with any number of flavors, sauces, or accompaniments. From wasabi powder in Japan to curry ketchup and chopped sausages in Germany—they are infinitely adaptable.

But where did this astounding food come from? To begin with, the potato is a New World food. A product of the Andes mountains and a long time staple of the high-mountain tribes of that range. Only after la Conquista of the 16th century did this staple of Spanish, German, Irish, English, Flemish and Indian cookery come across the pond to spread its nightshadey tubers along the fertile trade routes of the Old World. So the fry is no older than that.

But when did it emerge?

In his Complete Guide to the Art of Modern Cookery (published first in 1903), August Escoffier gives a recipe, in his characteristically vague manner, for fries, Pommes de Terre Pont-Neuf:

“Cut the potatoes square at the ends and sides then cut into batons of 1 cm wide sides. Deep fry until crisp on the outside and soft in the centre. This is the basic type of fried potato.”—Auguste Escoffier, recipe #4196

Escoffier’s name for fries harkens back to a supposed origin when vendors on the Paris’s Pont-Neuf bridge started selling deep fried potatoes in 1789, just before the French Revolution. Whether that story is true is up for debate, but it was common enough for Escoffier to name his fried potatoes after the hawkers. But even then the fries they were selling weren’t what we know today. They were single fried slices rather than twice fried sticks, though in fact they were French, fried potatoes, they were hardly french fries.

In reality, the modern method of double frying probably originated in Belgium and spread from there. The fry, for Belgians, is a more potent symbol of national culture than even the waffle—finding place in two of the most famous national dishes, Steak Frites and Moules Frites. The Belgian devotion to the fry is remarkable: the Belgian Fries Museum (there is one!) has “over 500 objects and exhibits of various kinds…[and] invites you to explore the rich world of these little golden potato sticks in all their many manifestations.”

And the origin of said fries may, according to Pierre Leclercq, a Belgian historian of gastronomy, the origin was probably a German man named Krieger who was a traveling food vendor at fairgrounds and used the double frying technique that we praise to this day. Eventually, while following the events of the Crimean war of 1854, Krieger started making fries in the modern shape. These he called Cosaque, as opposed to the larger sized, round sliced Russe potatoes—the square shape of the fries reminiscent to him of the tall straight hats of the Cossack soldiers.

Another historian, Dimitri Daskalides, agrees with most of that story, except the Crimean war part. He claims that the fries became so popular that then need to cook them faster simply led to the practical choice to start cutting the fires into sticks rather than round slices. We may never know.

Incidentally, Krieger, in a masterful stroke of marketing prowess, changed his name to Mr. Fritz to cement his identity as the fry guy in the towns he visited. 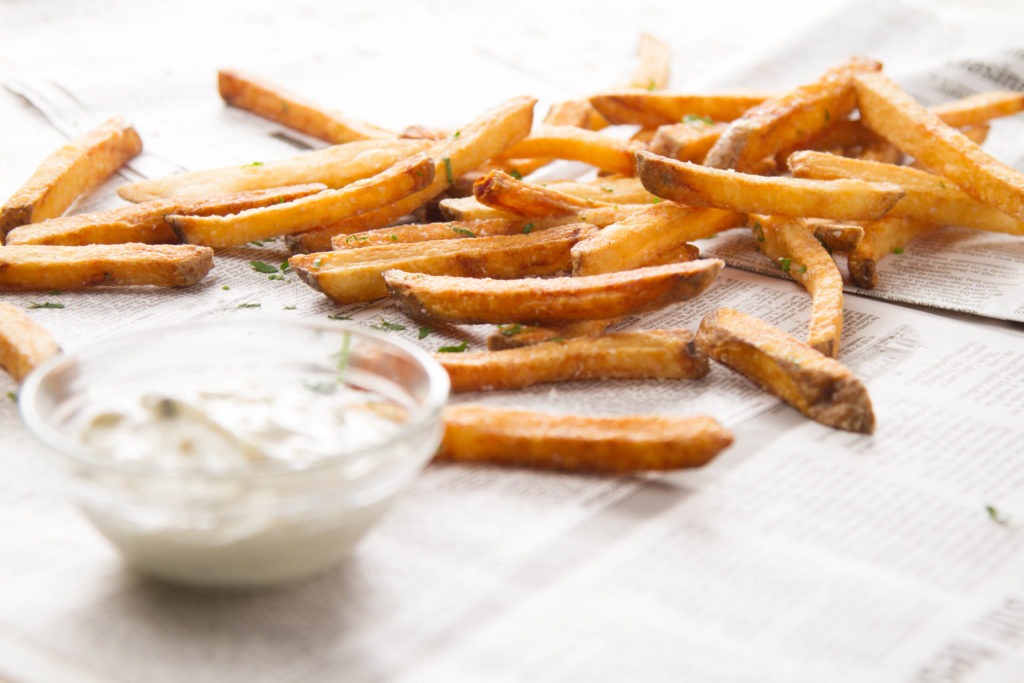 So much for their origin! What about the name?

I suppose we can guess that Belgian Fries just didn’t have a good ring to it.

The Oxford English Dictionary finds an early written reference to the term dating back to only 1894, in ‘Tictocq,’ a story by O. Henry, wherein a fictional French detective, Mr. Tictocq, says to an American visitor “Our countries are great friends. We have given you Lafayette and French fried potatoes.” An earlier reference is also given in the OED pointing to 1856’s Cookery for Maids of All Work by E. Warren.

It is probable that the name came from the culinary word “to french,” meaning to cut into long thin strips—i.e. frenched green beans. According to Jeffrey Steingarten, the name “french fries” first appears in print in 1918, with “french frieds” persisting into the 50’s.

But fries by any other name would taste just as savory.

I hope this little background piques your interest in french fries and makes you want to try them at home. Fries are pre-industrial food, and there’s no reason why you can’t make them yourself. And you should! Nothing is so much a food of comfort, fun, youth, and memory. Indeed, as poet Pablo Neruda said, fries are

the world’s
pleasure:…
dressed
anew
in ivory suits, they fill our plates
with repeated abundance,
and the delicious simplicity of the soil.—Pablo Neruda, Ode to French Fries

So eat a fry, and think about how the Columbian food exchange of the 1600’s, the street vendors of pre-revolutionary Paris, and adsplaced German fair worker brought you to enjoy such a golden, delicious experience. Or, just eat your fries and enjoy them!

For more on french fries, check out our other posts on the topic!

Jeffrey Steingarten, The Man Who Ate Everything

A History Of Belgian Frites, on Saucy Dressings 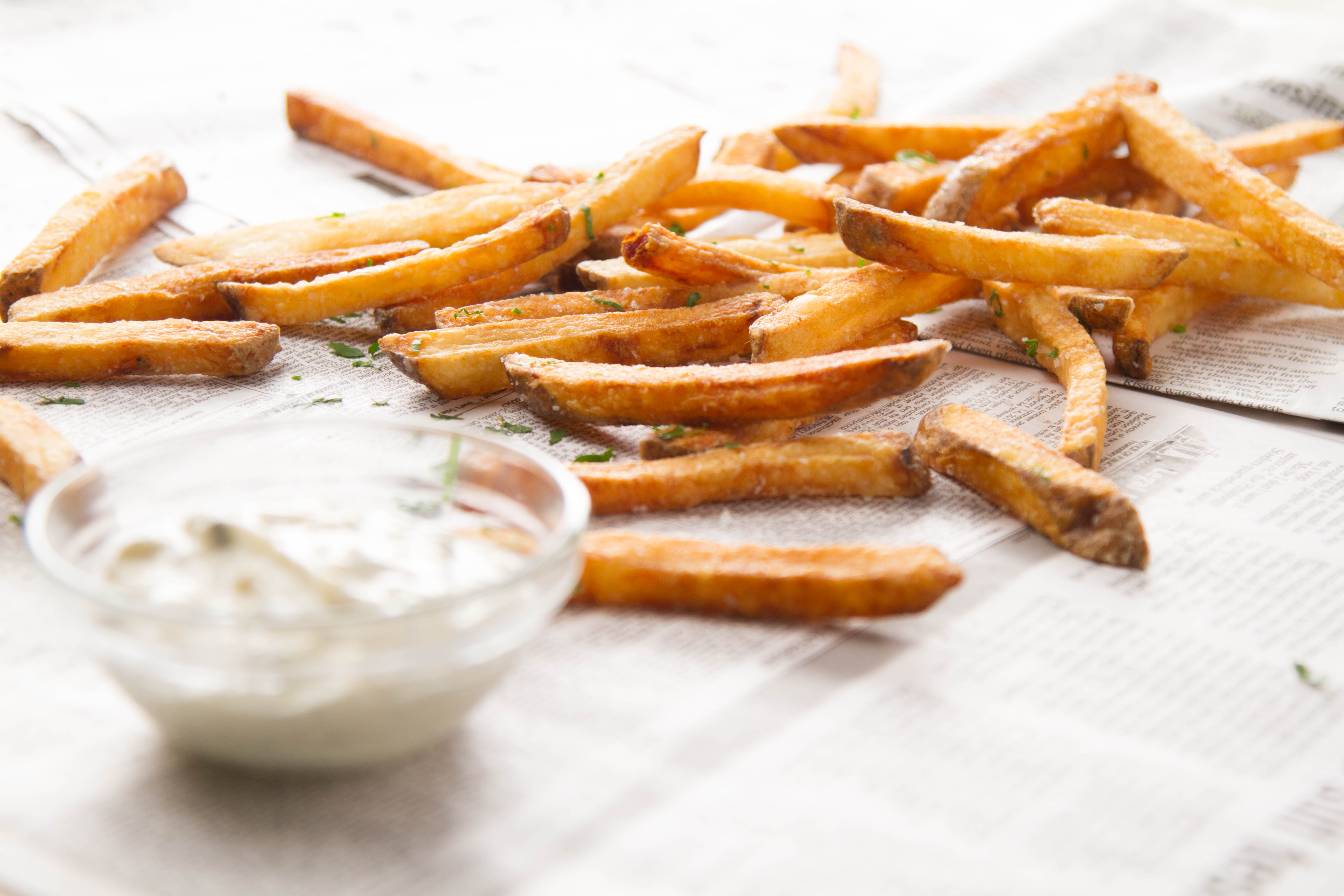