Spring fever may have you ready to fire up the grill. Pork chops are an excellent candidate for the grill, but how do you know when they’re done? Overcook them and they’ll be dry, undercook them and the chops aren’t safe to eat. The trick to the juiciest grilled pork chop lies in knowing when to take it off the heat, and we have the thermal secrets you need.

For food safety, pork must be cooked to an internal temperature of 145°F (63°C). Carryover cooking will cause the temperature to continue rising after being removed from the heat source, so knowing when to pull the pork chops off the grill is critical. If the internal temperature goes too far beyond 145°F (63°C) the meat quickly dries out and gets tough to chew. Learn more about the food-safe temperature for pork in our post: New Recommended Pork Temperature: Juicy and Safe.

To estimate what temperature to pull the meat from the grill, we need to understand the carryover cooking we expect. The rise in temperature after cooking is affected by two main factors:

With the combination of a high heat cooking method and a smaller cut of meat, the temperature increase we see during the rest will be quick and fairly high. After testing multiple chops, we consistently saw an 11-13°F (6-7°C) rise in temperature. The best pull temp with our grill was about 133°F (56°C). Given the many variables involved with carryover cooking, however, we’re recommending a pull temp of 135°F (57°C).

Brine Your Pork Chops for the Juiciest Results 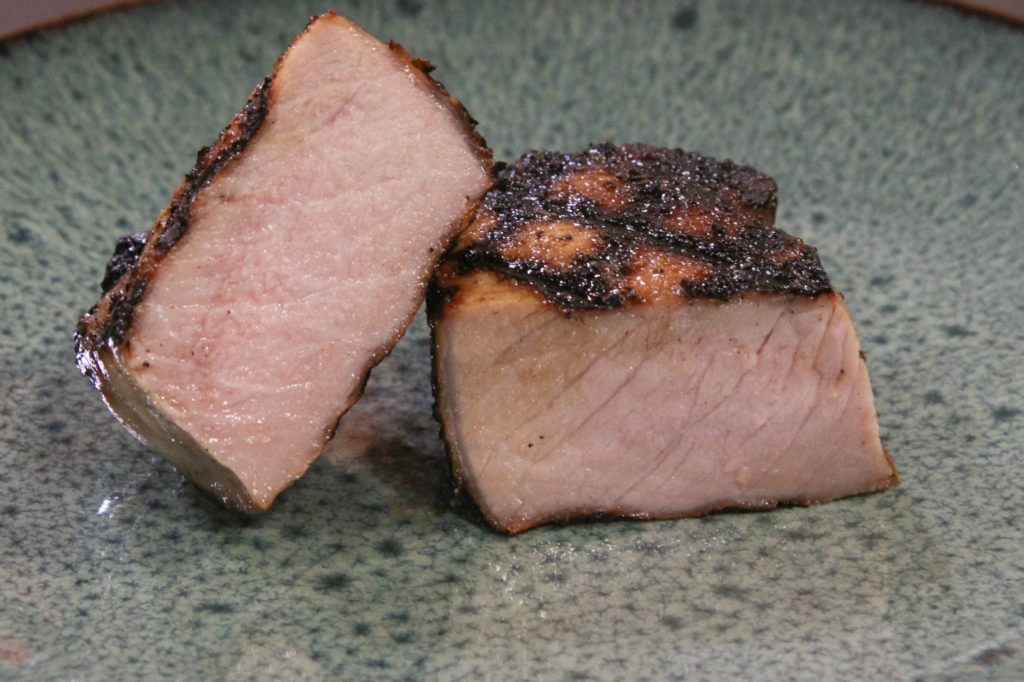 One of the most important things you can do when cooking lean meats like pork chops and poultry is brining. We wet brined our pork chops in the refrigerator overnight. If you haven’t tried brining before, it’ll be a game-changer. The salt in the solution moves to the protein through diffusion, and the water moves across the cell membranes through osmosis.

The salt dissolves some of the proteins forming a gel capable of holding on to more water. With more water and the protein structure of the meat altered, the meat will be juicier and more tender.

• Stir salt into the water and let it dissolve—it may take 10 minutes to completely dissolve. Add the pork chops to the brine in a gallon size zipper lock bag or a large plastic container fitted with a lid. Brine the pork chops in the refrigerator for at least 12 hours and up to overnight. We used Pork U’s Chicken and Pork Brine for our pork.

• Remove the pork chops from the brine and pat completely dry. It takes quite a bit of heat energy for any surface moisture to change phases from a liquid to a gas and evaporate, and this process will impede then color and crust development when the pork chops hit the searing heat of the grill. Once patted dry, apply dry rub to both sides of the chops.

Pro Tip: Score the Fat for Even Cooking

“Pork chops have a tendency to buckle as they cook, making it hard to maintain even contact with the pan. The layer of fat around the chop’s exterior shrinks faster than the meat inside, squeezing it and causing it to buckle. Score the fat in two or three places with a sharp knife. The chops won’t look flawless, but they’ll cook a heck of a lot more evenly.” —The Food Lab, Kenji Lopez-Alt, pg. 354

• Cook pork chops on the grill about 5-7 minutes on each side to an internal temperature of 135°F (57°C)—spot-check the temperature with a ThermoPop®.

• Pull from the grill and allow to rest on a cutting board, tented with foil, for about 5-10 minutes. Spot check the internal temperature after about 5 minutes with a ThermoPop to be sure you’re at, or almost at the target temp of 145°F (63°C). The ThermoPop’s speedy 5-6 second readings will keep your hand from burning when spot checking temps on the grill. (If your pork chops don’t rise all the way to 145°F, you can throw them back on the grill for a minute or two.)

It’s important to cook pork thoroughly, but so easy to err on the side of overcooking. With these key temps, you can be sure to avoid serving tough, dry pork chops. Spot checking for the right pull temperature is the key to juicy pork chops, and an easy-to-use pocket thermometer like the ThermoPop is the perfect tool for the job. Fire up that grill!

Chicken and Pork Brine, Pork U