Deciphering between uncooked, cured and ready-to-eat varieties of ham is often an arduous task. And because a mismanaged ham can turn out dry and flavorless, knowing how to prepare each variety will ensure your holiday feast is one to remember.

It’s important to know what kind of ham you’re cooking. Depending on the level to which the ham has been cured (if at all), the cooking process will vary greatly.

[Tweet “Depending on the level to which the ham has been cured (if at all), the cooking process will vary greatly.”]

How to Cook Ham: Know Which Ham to Buy

Fresh ham is a raw uncured rear leg of a pig. The cut usually comes with the skin still on. The meat is typically pale pink to beige—the color of raw pork. This type of cut is perfect for roasting, or smoking. Because it hasn’t been cured it’s important that an internal temperature of at least 145°F is reached during the cooking process (per USDA recommended temperatures).

Here’s a great Ham Roast recipe from Cook’s Illustrated. With the right brine, the right sequence of oven temperatures (500 to 350°F), and the right glaze, you can transform an uncured ham into a pork roast with rich, moist meat and crackling crisp skin. 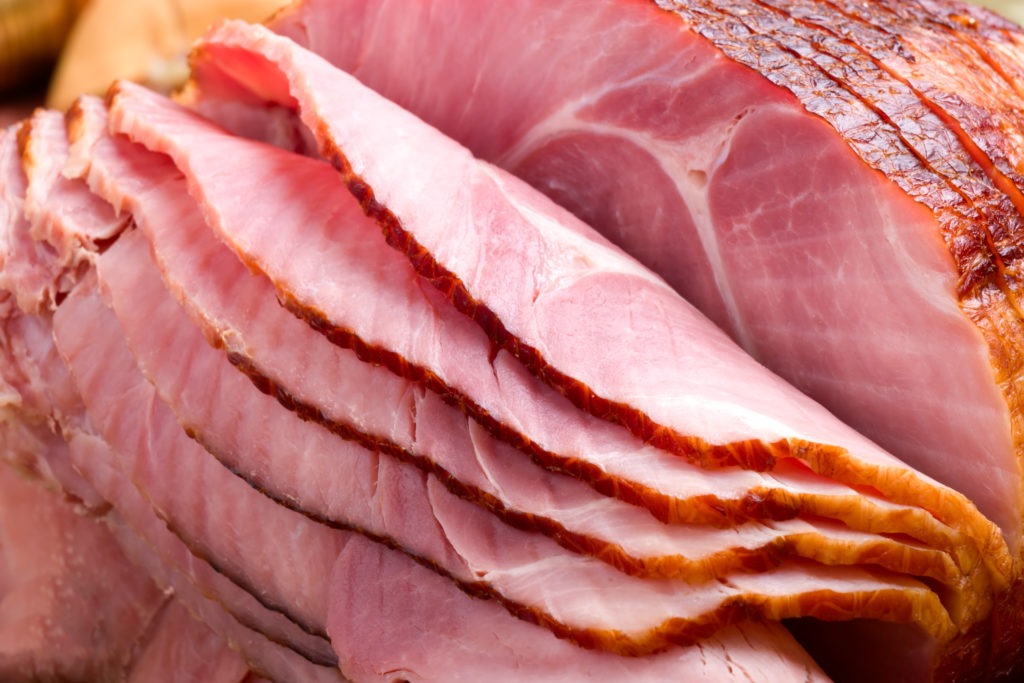 This type of ham is cured by burying it in a mound of salt or by rubbing the skin with salt. In some cases, sodium nitrite is also added to quell the spread of harmful bacteria and protect the ham during the curing process. It’s usually hung and air-dried for 6-18 months at cool temperatures allowing for dehydration and concentration of flavors. Often a dry cured ham is smoked at low temperatures to help enhance the flavor.

Typically, manufacturers dry-cure ham between 54-74°F. Humidity and air speed are also controlled as growing mold can impede evaporation of water by closing pores on the surface. Cold smoke (<68°F) is applied during the curing process to inhibit the growth of bacteria on the ham surface and prevent mold from growing. It also imparts a different flavor to the final product.

Dry cured hams, like prosciutto and jamon serrano, can be eaten uncooked and at room temperature. You don’t have to worry about foodborne bacteria – the combination of salts and nitrites will have rendered bacteria harmless.

[Tweet “Dry cured hams, like prosciutto and jamon serrano, can be eaten uncooked and at room temperature.”] 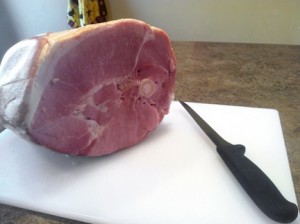 When the process of smoking a cured ham raises its internal temperature to 150°F the ham is labeled “fully cooked” or “ready-to-eat.” Although these hams are safe to eat without further cooking, roasting them further will help to develop richer flavors, and give you an opportunity to add and caramelize a sweet glaze.

But, roasting a “fully cooked” ham can be tricky. Set your oven too high and you’ll end up with a dry, flavorless ham. Under roast it and you will not have unleashed the hidden flavors, and sufficiently caramelized the glaze.

When it comes to preparing a moist and flavorful ready-to-eat ham, no one does it better than the folks at America’s Test Kitchen (ATK). Their army of chefs have tested several recipes and have come up with one in particular that guarantees to be a family favorite.

[Tweet “When the process of smoking a cured ham raises its internal temperature to 150°F the ham is labeled “fully cooked” or “ready-to-eat.””]

How to Reheat a Fully Cooked Ham

A few tablespoons of the drippings can be mixed with the final 1/3rd of the glaze to make a delicious gravy. Drizzle some over the ham, or enjoy some on a biscuit.

If you’ve got your heart set on a Honey Baked Ham™, disregard the recipe above. Honey Baked Hams are made to be enjoyed at room temperature. Any further heating might dry out the meat and ruin a costly dinner. If you really want a warm ham, we believe the ATK method is the best way to heat this ham too. But, we like this brand served according to the processor’s recommendation—room temperature. The company recommends allowing the ham to stand at room temperature one half hour before serving. Up to one hour is probably ok but we recommend that the uneaten portion is refrigerated as soon as possible after the meal.

Buyer’s clubs sell other brands of bargain-priced spiral sliced ham. Instructions included with these hams often advise heating in an oven set to 325°F for 10-12 minutes per pound. Yikes! While there’s no indication of a desired internal temperature, instructions simply dictate that you “not overheat.” Our experience is that simply popping one of these buyer club hams into the oven will leave you with chewy, dried out, separating slices of ham and a pan full of liquid. If the processor’s instructions that come with the ham advise heating, we strongly recommend that you not eat the ham at room temperature. Doing so could be a food safety issue.

However, if your ham is fully cooked and ready-to-eat, we agree with ATK and suggest you ditch the packaged instructions and go with the recipe above. The low-heat process and homemade glaze will trump anything included with the packaging and will guarantee this year’s ham is moist and flavorful.