What Temperature to Cook Chicken To?

The FDA Food Code recommends cooking chicken to 165°F (74°C). But the pasteurization of chicken is actually a function of both temperature and time. If you can hold your chicken at 145°F (63°C) for 8.5 minutes, you can achieve the same bacterial reduction as at 165°F (74°C). In his new book Kenji López-Alt uses this principle along with the principle of carryover cooking in large masses of meat to achieve succulent, perfectly safe results at a dramatically lower pull temp. To learn the necessary thermal secrets, keep reading.

Verifying the internal temperature of chicken is particularly important given the threat of salmonella bacteria in poultry. Why is there so much concern with this particular bacteria? Salmonella is a very hardy bacteria. It lives in the temperature range of 35-117°F (2-47°C) which is beyond what most other common food bacteria can tolerate. According to the CDC, 1 in 6 Americans gets sick from foodborne illness each year, and about one million of those cases can be attributed to salmonella.

Proper cooking and refrigeration temperatures when dealing with chicken are critical to avoid foodborne illnesses.

Food Safety is About Temperature and Time

The FDA Food Code suggests cooking chicken to 165°F (74°C) to be sure all bacteria is killed and safe to eat. This temperature is suggested because at 165°F (74°C) the chicken achieves a 7-log10 reduction—meaning that 99.99999% of the bacteria present are destroyed—instantaneously: a foolproof rule to follow for safety. Salmonella isn’t anything to be trifled with, and 165°F (74°C) is indeed the temperature to target if preparing food for individuals at higher risk of illness (older adults, pregnant women, young children, and others with compromised immune systems).

We’ve written a more extensive explanation about how times and temps relate in making chicken safe than we can fit here. Take a look, espeicially if you’d like to see the USDA document about times and temps!

Chicken as the Temperature Rises

In The Food Lab, Kenji breaks down what is going on with the protein as the internal temperature of poultry rises:

Below is a breakdown of what the texture of the breast meat of chicken will be at different pull temperatures:

According to this temperature guide, the breast meat will become dry if taken too far above 150°F (65.5°C), while the leg meat needs to reach the temperature range of 160-170°F (71-77°C) in order for the connective tissue to dissolve into mouthwateringly rich gelatin. Knowing that salmonella has been scientifically proven to be safely eliminated at temperatures lower than 165°F (74°C), we followed Kenji’s recipe for Simple Whole Roast Chicken to the finest detail, including the 145°F (63°C) pull temperature.

Using ThermaData Thermocouple Loggers, we placed thermocouple needle probes in four locations: the standard recommended location at the deepest point in the breast avoiding bone (the lowest temperature found in the chicken), one in the breast toward the shoulder, another closer to the top of the breast about 1/2” below the skin, and the last probe in the center of the thigh. The data loggers enable us to see how all the temperature gradients rise over time as the lowest temperature reaches our pull temperature, and monitor the carryover cooking through a 30 minute rest to be sure it stays at or above 145°F (63°C) for at least 8.5 minutes.

• Line a sheet pan with heavy-duty foil and place a V-rack or cooling rack on the pan. Suspending the chicken above the pan is important to allow for air circulation around the entire bird.

• Remove the neck and giblets and pat the chicken completely dry with paper towels. Dry skin with be more crisp and brown evenly.

Rinsing the raw chicken will cause tiny droplets of contaminated water to spray all around your kitchen increasing the risk of spreading bacteria through cross-contamination.

• Using your hands, separate the skin from the meat.

• Apply oil both under and on top of the skin. Using oil rather than butter will yield crisper skin because butter is about 18% water, which will steam and then cool the skin as it evaporates, giving the skin a spotty appearance with soft spots as it browns.

• Season on all sides with salt and pepper.

To Truss or Not to Truss?

Trussing—the act of tying up the bird’s legs before cooking—is an oft-recommended but totally pointless exercise. It has the opposite effect of what you want for a bird, effectively shielding the inner highs and thereby making the slowest-to-cook part cook even more slowly. Chickens and turkeys should always be left as nature intended them: with their legs wide open, to allow for maximum heating via convection. —Kenji López-Alt, The Food Lab, pg. 587

• Place the chicken onto the prepared rack. Place the ChefAlarm probe into the deepest part of the breast to track the lowest temperature during the cook. Set the ChefAlarm’s high alarm to 145°F (63°C).

• Place the chicken in the 500°F (260°C) preheated oven and turn the oven temperature down to 350°F (177°C) as soon as the oven door is shut. Continue cooking until the high alarm sounds (cook time will be approximately 1 to 1-1/2 hours depending on the size of the bird).

• Once the alarm sounds, spot-check the breast meat with an instant read thermometer like a Thermapen to be sure the ChefAlarm’s reading is the lowest temperature (the exact location of the lowest temperature may shift during the cook). You need to verify that the lowest reading is 145°F (63°C). Check the temperature of the leg meat, as well. It should be in the perfect 170-175°F (77-80°C) range. If not, put the chicken back into the oven for a couple more minutes.

• Once final pull temp has been reached allow the chicken to rest, uncovered, for 15 minutes. This is critical. It must rest for a full 15 minutes for the full pasteurization of the meat to occur and for the chicken to be safe to eat. To be extra safe, you could use both the built in timer function in the ChefAlarm set to 15 minutes and the low temperature alarm feature unique to the ChefAlarm. Simply set the low temperature alarm to 145°F (63°C) during the rest to be sure your chicken doesn’t dip below the target temperature for at least 8.5 minutes. 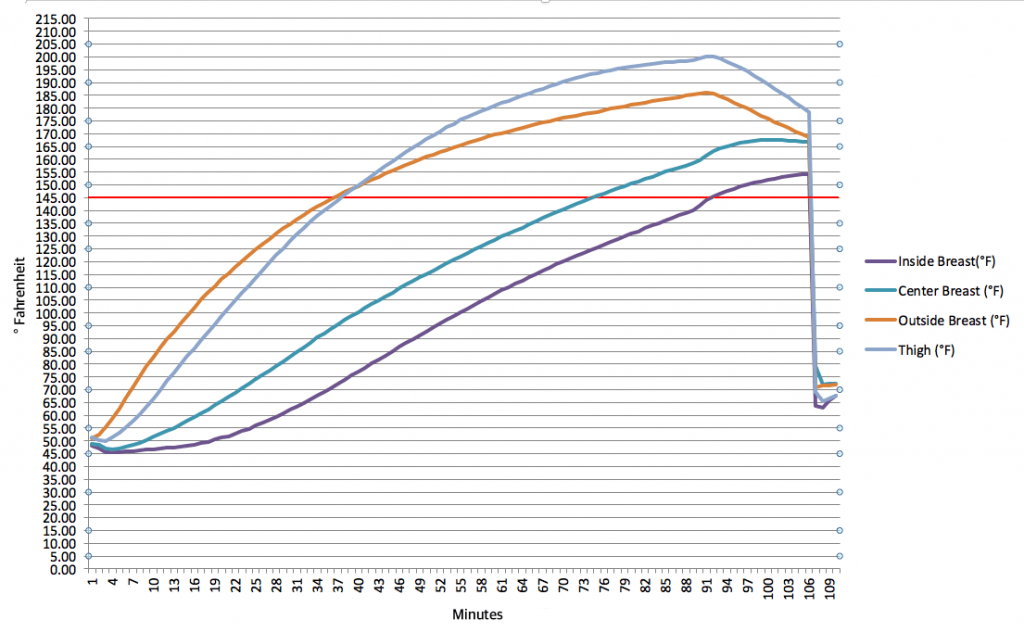 The graph above shows the temperature changes at various points in the whole chicken as measured by our ThermaData Thermocouple Loggers. You can see exactly how the internal temperatures increased during the cook. The red horizontal line represents our pull temperature of 145°F (63°C). The most dramatic rises in temperature were, unsurprisingly, in the thigh and the outer breast meat which were most directly exposed to the hot air in the oven. Neither of those areas saw a temperature increase during the rest. Rather, you can see how they began to cool immediately once the inside breast meat reached 145°F (63°C) and the chicken was removed from the oven.

Most importantly, we found that the coolest breast meat (the internal reading above) did NOT cool when the chicken was removed from the oven. See how the purple line above continues to rise from 145°F (63°C) to a maximum temperature of 155°F (69°C) during the resting period—the most dramatic temperature increase due to carryover cooking during the rest.

It is important to note that this continuous rise in internal temperature after the chicken was removed from the oven is due to the significant mass of the whole chicken being cooked. We would NOT expect to see such carryover cooking in a single chicken breast, for example.

The thigh’s peak temperature, as shown above, of 200°F (93°C) occurred as the internal breast meat reached our pull temp, resulting in a gradient variance of 55°F (30.5°C) between the coolest and hottest parts of the chicken! Many different temperatures occurring in the same roast chicken.

In summary, we were able to observe that with Kenji’s recommended pull temperature the chicken remained in the necessary thermal range above 145°F (63°C) for a full 15 minutes (more than the required 8.5 minutes for pasteurization) after pulling the chicken from the oven, making it just as safe to eat as a piece of chicken that had reached the instantaneous pasteurization temp of 165°F (74°C).

The Real Test: How Did it Taste?

Because the chicken was cooked to a lower temperature, the meat retained more moisture and the result was a juicy and succulent piece of chicken—not a dry bit to be found! Not only was the meat extremely juicy, but the measures taken with drying the meat and separating, oiling and salting the skin, made for crackling-crisp skin. Some of our very willing taste-testing subjects commented this was the best roasted chicken they’d ever tasted.

Because of personal preferences and some individuals being more susceptible to contracting illness, this cooking method may not be for everyone. But with the right tools and expert advice, you can experience better tasting roasted chicken. With the ChefAlarm and Thermapen‘s precision and accuracy there is no need to question your chicken’s safety. Get roasting!