The average home cook is just that: average. But not you—you are not average, and neither is your food. So why would you settle for average, oven-baked, store-bought, crinkle-cut fries? You wouldn’t. No, that’s why you’ve started reading our series on homemade french fry cookery. We’re here to travel with you through the realm of critical temperatures to a glorious, golden-brown fry-vana.

At the outset, we have a decision to make: what oil should we use to fry our fries? We need an oil that can handle the high heat of deep frying and that will give us good tasting fries. We need to consider smoke point and flavor profile.

When those “gaseous products” that escape the oil meet a flame, they can ignite. This means that an oil with a proper smoke point for a given task is not just a recommendation, it is a matter of safety.

Plus, when an oil starts to smoke, its flavor changes, tasting burnt, and it transfers those flavors to your food.

Yes, it would be easy to fry your fries in regular salad oil since you have some on hand, but it has a smoke point that is low enough to become dangerous and start tasting bad at deep-frying temperatures. Any highly-flavored seed oil will not work well either, as their impurities lower the smoke point. Case in point: cold pressed peanut oil can hardly be used for cooking at all before it starts to smoke and burn, while refined peanut oil has a smoke point of 450°F (230°C). And since oils start to break down even below their smoke point, we need an oil with a high smoke point for the 375°F (191°C) frying we will be doing.

What we don’t want from our cooking oil is something that will tinge the fries with an unwanted flavors—I’m looking at you, metal-fish tasting canola oil! When people talk about oils, they often refer to them as having a “neutral” flavor, and that’s what we want: a flavor that will not taint the potatoey goodness of the french fries. The reigning contender in this category is the aforementioned refined peanut oil. Long accepted as a standard deep frying oil because of its neutrality, high smoke point, and ready availability (on the bottom oil shelf of most grocery stores), peanut oil is the choice of home fryers as well as chains such as Five Guys Burgers and Fries. French fried potatoes fried in refined peanut oil taste like frenchfries.

(As a matter of interest, pure peanut oil is so free of impurities—i.e. proteins and stray carbohydrates—that it doesn’t even have to be listed as a peanut ingredient for allergen information! You can read about it on the FDA’s allergen page as well as the Food Allergy Research & Education website.)

Of course, if we could flavor the fires with the oil in a way that we liked…well, shouldn’t we give that a try? For that, we can go back a few years and see that the answer for flavorful fries is beef tallow. Tallow (the name for rendered beef fat, an analog to pork’s lard) was used widely for deep frying until as late as the 1980’s, when people suddenly became afraid of saturated fats. It has a distinctive beefy flavor and a smoke point comparable to that of peanut oil. Pioneers fried in beef fat, Mcdonald’s used to fry in beef fat—shouldn’t we try frying in beef fat, too? We should.

So, to settle the question for our future posts, we’ll try a batch fried in the modern standard, refined peanut oil and a batch fried in standard of yore, beef tallow. Along the way, we will try to investigate some of the thermal properties of the oils, to find out if one has a thermal advantage over the other.

In this kitchen trial, we tested the flavor and the thermal properties of beef tallow vs peanut oil to determine whether or not there are culinary or physical reasons to choose one over the other. To test the thermal, we quantitatively measured the heat capacity of the oils to determine which will cook our french fries faster. And of course, we wanted to find out if beef tallow fries—touted by aficionados as being far superior—are better tasting than peanut oil fries.

Heat capacity is the amount of heat energy that a substance can hold. Heat and temperature are not the same thing! Heat is the amount of energy a substance contains, while temperature is how that energy is manifested and transferred. Imagine, if you will, heating a stone and a pot of water of equal mass to 212°F (100°C). If you were to touch them both, they would both start to burn you rather quickly, but the water would do far more damage, because water has a higher heat capacity than stone. It has more thermal energy, so the stone would run out of energy before the water would. (Don’t try that at home!)

What we hope to find is whether or not the beef tallow has a higher, lower, or equivalent heat capacity when compared with peanut oil. Does tallow have more heat in it and can it therefore cook the fries a little more quickly or thoroughly before they begin to get soggy?

We hit an unexpected problem with the beef tallow. Despite the dryness of our fries and the shallow depth of oil in the pot, the tallow foamed and bubbled so much that it threatened to overspill the edges of the pot. We quickly turned off the flames under the tallow pot each time the bubbling tallow threatened to reach the top of the pot. We experienced this same phenomenon on each of multiple fry cooks with tallow. Stay tuned for more on this effect in subsequent posts as, with the help of some food scientists,  we explore why this occurs and what can be done about it.*

But because of the burners being turned off for a few minutes each time, the temperature data on the beef tallow became skewed.When we killed the heat and moved it off the burner, the temperature was allowed to fall quite rapidly, as it was not supported by the flame without interruption as was the peanut oil pot.

The final color of the cooked french fries was similar, as was the crispness of the two versions.

That being said, we can see an interesting piece in the data we were able to salvage from the boilover. 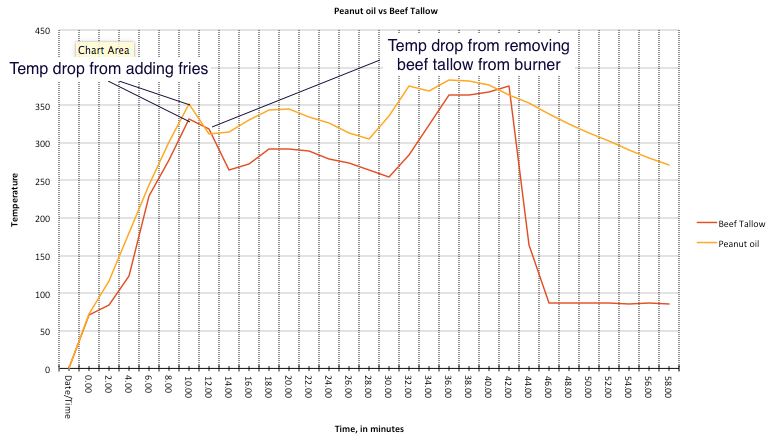 You can see in the chart the time after we added the french fries to the oil. Both the peanut oil (yellow line) and the beef tallow (orange line) temperatures start to drop, but the beef tallow temperature drops more slowly. As both pots had the same amount of oil and the same amount of fries, this tells us that the tallow was losing fewer degrees of temperature for every bit of heat energy given away, i.e. the tallow has a greater heat capacity. The same can be seen after the second heating when the fries were cooked the second time (starting at about 32 minutes for peanut, 36 minutes for beef tallow): the peanut oil temp dips, the beef tallow temp stays fairly level, and even increases. The rapid decline in temperature thereafter was a result of removing the oil from heat.

Fries fried in peanut oil are delicious and everything we expect from a good fry, homemade or not! But the beef tallow fries had something else, a richer, deeper flavor that was just a little bit like eating fries made from potatoes that had been cooked with a pot roast. They were not astoundingly better, but the meatier flavor was appreciated and more satisfying than the peanut oil fries. One ThermoWorker liked the peanut oil better, but the rest liked beef better.

While the flavor of the beef tallow fries was somewhat better than that of the peanut oil fries, and the thermal capacity is also slightly better, the very dangerous possibility of burning your house down  if your tallow were to bubble over into the flame when you add the potatoes means I cannot do anything but recommend the peanut oil—at least until the foaming problem is resolved.

Add to the safety issues the fact that peanut oil is easy to find, whereas beef tallow must either be purchased from a specialty vendor (or a very well stocked butcher), or rendered at home—a time-consuming process, the smell of which will only make you want a cheeseburger the whole time—and peanut oil is the clear winner. Conventional wisdom here prevails, and we can safely say that high-heat peanut oil is the best oil for frying your homemade french fries!

We got hold of an oil scientist, Dr. Oscar Pike of Brigham Young University, and posed this quandary to him. In conjunction with his advice, we diluted the rendered beef fat with 10% peanut oil. We tried a batch of fries cooked with 1500g home-rendered beef tallow and 167g peanut oil.

You see, peanut oil has a lower viscosity and a lower surface tension than beef tallow. By adding the peanut oil, we lowered the surface tension of the overall batch enough that the foam was NO problem! Plus, with a 90% beef fat ratio, there was no lack of good, rich tallow flavor.

By mixing the oils, we severely diminished one of the dangers of frying in beef oil, and preserved the advantages, including a higher heat capacity. While peanut oil is still easier and cheaper to find and buy, we recommend giving the diluted beef tallow method a shot, as it produces superior tasting fries.

Whatever you cook with, the key to good crispy homemade french fries is careful temperature control. And unless you have any ThermaData loggers in your cupboard, a ChefAlarm (and pot clip) set to a high temp of 375°F (191°C) and a low alarm of 350°F (177°C) will do the trick!