What game day spread is complete without a tray of loaded nachos? Well-suited for a snack or full meal, this no-silverware-required dish is a favorite for its lava-like, smooth-as-silk cheese sauce. When cheese is heated it often turns into a curdled mess with pools of grease. How can a full-flavor, liquid cheese sauce be made at home? The secret is in the melting properties of cheese, including the temperature of its melting point. Bring it on, cheddar!

The basic building blocks of cheese are milk protein (casein), water, fat, and salt. When heated, the protein molecules break apart and become fluid. Melting, a phase change from a solid to a liquid isn’t really happening, the cheese becomes fluid, much like what happens to plastic when it’s heated. The video below illustrates the plastic, saucy consistency we were after:

Apply Some Heat: At about 90°F (32°C) the fat in cheese begins to soften and melt. Increase the temperature by about 40-60 degrees and that’s when the activity starts with the protein. The molecules begin to break apart and disperse throughout the fat and water. In order for the cheese to stay beautifully stringy and melty, the protein needs to stay evenly dispersed with the rest of the moisture and fat (an emulsion). Thing is, once cheese is heated too far beyond its melting point, the proteins firm up and squeeze out moisture—the same way protein does in meat. When this occurs you’re left with rubbery, clumpy bits of cheese protein that separate from the fat and moisture. Case in point, the greasy slick on the top of pizza, and the puddles of grease on your nachos.

But Not Too Much Heat: The melting point of classic cheddar cheese used to make nachos is about 150°F (66°C). In an article titled The Rules of Melting Cheese, Fine Cooking points out the importance of  melting the cheese slowly and gently to yield the loosey-goosiest results. When exposed to high heat—especially for extended periods of time—that’s when the proteins seize up and become firm–squeezing out moisture, then separating. To help keep your cheese stringy, shred it to expose more surface area so the cheese will melt more quickly, bring it up to room temperature before heating so it doesn’t require as much heat energy to melt, and use low, gentle heat.

Good Melters vs Bad: The best, most meltable cheeses are ones that are young and high in moisture. The longer a cheese is aged, the more of its moisture is lost, and the more rigid the proteins become—they resist breaking apart and becoming fluid. Think about shredded parmesan and how it reacts when heated alongside mozzarella in making lasagna. The mozzarella melts beautifully and is stringy when a slice is served; but the parmesan holds its shape. The protein in the older, drier cheese becomes a bit stubborn and will never be a melter like mozzarella. Examples of good melters are: cheddar, colby, Swiss, monterey jack, and mozzarella.

Make it Saucy: How does all of this translate to a sauce? We need to create a fluid, pourable sauce without separating the cheese. Moisture is going to have to be added—but adding milk to cheese alone isn’t going to do it. We need something to hold everything together in a smooth emulsion, and we found a few different methods that work well.

How to Melt Cheese – Three Ways

Kenji with Serious Eats has a recipe for nacho cheese sauce that utilizes cornstarch to bind the protein, fat, and additional moisture to yield an emulsified, pourable sauce. The starch molecules swell up, thickening the sauce, while the evaporated milk adds a concentrated source of milk proteins. This helps the entire mixture stay smooth and emulsified, resulting in a creamy sauce. He recommends tossing the shredded cheese with the cornstarch before cooking so it is evenly dispersed and does not form clumps when cooked. 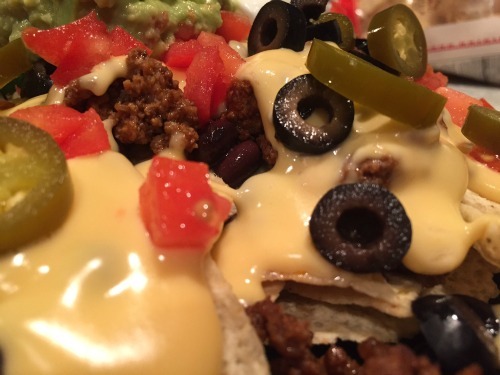 The resulting sauce from his recipe is beautifully pourable and delicious. When it cools and sets up it’s a bit firm, but can be reheated. Additional milk can be added to leftover sauce when reheated to return it to a smooth, liquid consistency.

Ready to level up your cheese sauce game? We’ve found that the secret to perfectly velvety-smooth nacho cheese sauce is a combination of keeping the cheese at low temperature while cooking, and the use of sodium citrate (derived from citric acid) and SHMP (sodium hexametaphosphate). These two ingredients are often referred to as “melting salts”, and you may see them in the list of ingredients on a jar of commercial cheese sauce. This is what’s scientifically going on behind the scenes:

“Salts such as sodium citrate and sodium hexametaphosphate are known in the cheese industry as melting salts. Their primary purpose is to swap sodium ions for calcium ions bound to the casein proteins in cheese. In doing so, they loosen these proteins and make them water-soluble.

In combination with heating and stirring, these melting salts improve the emulsifying ability of the proteins in the cheese. They also tend to shift the pH of the cheese upward, which improves the texture and stability of molten cheese.” –ChefSteps

We used two different recipes. One for Nacho Cheese Sauce from ChefSteps, and another for Queso Dip from Modernist Cuisine. The ChefSteps recipe uses both sodium citrate and SHMP in a sous vide cooking method (learn more about sous vide cooking in our post, An Introductory Guide to Sous Vide Cooking), and the Modernist Cuisine recipe uses only sodium citrate in a stovetop method.

The sous vide recipe keeps the ingredients (sharp cheddar, milk, and melting salts) at 167°F (75°C). Part of the beauty of sous vide cooking is that you cannot overcook your food. We monitored the temperature in the water bath using a ThermoPop®. Our sous vide circulator’s temperature reading was off by 2 degrees, so we set it to 169°F (76°F) to keep our cooking temperature accurate. It cooked for just fiftteen minutes and was finished in the blender.

Aware that low heat is best for melting cheese, we carefully kept the temperature around 165-170°F (74-77°C) with the stovetop method (its ingredients are pepper jack cheese, water, and sodium citrate). The sodium citrate was allowed to dissolve in the water in a saucepan, and once dissolved, the shredded cheese was added and whisked constantly over medium heat until melted and smooth, while keeping the temperature no higher than 170°F (77°C).

Both cheese sauces were processed in a blender after cooking, then served immediately. Both sauces were incredibly smooth with full cheese flavor (the flavor was more intense and straightforward than with the cornstarch based sauce). The melting salts allow the cheeses to be heated well beyond their melting point without losing the sauce’s emulsion. Translation: the sauces reheat very well.

When using the melting salts we like that nearly any liquid can be used to create the sauce. Our queso dip was made with only water and was fantastic. You can also use beer, chicken stock, or juice.

If you choose to make your own cheese sauce for nachos, you’ll know how to better go about achieving a smooth, emulsified sauce. Keep an instant read thermometer like a ThermoPop handy, and have your party food flawlessly planned before kickoff.