You are here: Home / Pork / The Best Pork Temperature Is 145°F: USDA Recommendation Lower Than Many Think
Author: Martin Earl

Pork is the world’s favorite meat, exceeding mutton, beef, and even poultry in per capita consumption. But how much of that meat is overcooked? Have you ever been subjected to a dry pork roast or tough chops? I imagine you have. People used to—and unfortunately still do—overcook many pork products. What they don’t know is that the USDA recommended temperature for whole cuts of pork is 145°F, with a 3-minute post-cook rest.

Research performed by the National Pork Board has found that most at-home chefs have a tendency to overcook common cuts of pork, for fear of serving unsafe, undercooked pork. There is good reason for your grandmother cooking pork until it well-resembled shoe leather. Before the introduction of much more modern farming and feeding practices, undercooked pork was a source of the disease trichinosis—the gateway to a potential health disaster that no one wants to deal with. Cooking pork to a high temperature eliminated that risk. Until 2012, the recommended doneness temperature for pork was 160°F (71°C). However, advancements in hog farming have necessitated a change in the temperature recommendations.

Since the 1970’s, when Americans were first alarmed by the fat content of their food, American pork has been bred leaner and leaner. Cuts once marbled with tasty fat are now almost completely lean, except for the belly which is still streaky with fat for bacon. On average, most common cuts of pork are 16% leaner than they were 20 years ago, and saturated fat has dropped 27% in the same time. In fact, pork tenderloin is now as lean as a skinless chicken breast.

This has been bad news for tastiness, as the lack of fat not only equates to a lack of flavor, but it also allows meat to dry out more easily during cooking—thus rendering a roast more likely to be both bland and dry. Heritage breeds and cuts can still be procured that are rich in fatty marbling, but they are hard to find and expensive. So the changes in pig breeding and farming made cooking pork to the formerly-recommended temperature unsavory.

While this change in pork breeding was taking place, farmers were also revising their feeding practices.

Much progress has been made in reducing trichinosis in grain-fed hogs and human cases have greatly declined since 1950. Today’s pork can be safely enjoyed when cooked to an internal temperature of 145 °F as measured with a food thermometer”—USDA, “Fresh pork, from farm to table“

Modern grain-fed pigs are so much safer to eat that the USDA changed the cooking recommendation for pork. And it’s a good thing too! The tandem changes in breeding and feeding gave us pork that is lean and more likely to dry out, but also a temperature that can handle that leanness better. 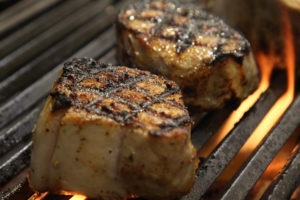 The new USDA recommended temperature for pork is a significant 15°F (8°C) less than what was previously recommended, and will typically yield a finished product that is pinker than most home cooks are accustomed to. (Note, however that color is not an indicator of temperature or doneness!)

As we said above, the new recommendation for pork is 145°F (63°C) internal temperature, followed by a recommended 3-minute rest. This change might find you resurrecting some of Grandma’s old recipes with a new, more juicy result. By cooking to this lower—yet safe—temperature, you can get much more tender and flavorful chops, loins, and roasts. Note that this is the new recommended pull temp, not final temp.

Interestingly, chef recommended temperatures and leading cookbooks have been suggesting cooking pork to 145°F (63°C) internal temperature for years before the change, but that was considered “risky” by the USDA and the public at large.

Pink Pork Can Still Be Safe To Eat!

As we mentioned above, with the new temp recommendations you may be eating some pork that is pinker than you are used to. That’s ok! Neither doneness nor safety are determined by meat color. So if your ChefAlarm® sounds at 145°F (63°C) and you take the roast out of the oven, don’t put it back in if it’s still pink! Just be glad that you can have the juiciest pork roast you’ve tried yet.

These recommendations for pork temperatures are based on safety, and will generally apply best to tender cuts like chops. For BBQ cuts, the recommended temperature for optimal tastiness is 203°F (95°C). A pork shoulder cooked to 145°F (63°C) is safe to eat, but will not be tasty at all. Continue cooking high-connective-tissue cuts (which have enough fat and collagen to handle the high temperatures) to 203°F (95°C). 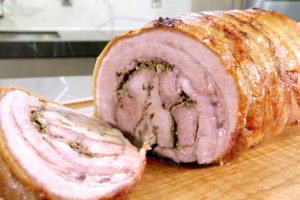 The revised temperature recommendation only applies to pork whole-muscle cuts, such as tenderloin, chops, and roasts. However, ground pork (including sausages), like all ground meats, should be cooked to 160°F (71°C) to ensure food safety. Regardless of cut or cooking method, both the USDA and the National Pork Board recommend using a digital cooking thermometer to ensure an accurate final temperature.

Juicier pork at a lower temperature—better for the home cook

This is great news for home cooks who can now feel confident in preparing their chops, loins, and roasts to a perfect medium. These new pork temperature guidelines will help elevate the understanding of properly cooking pork. And you can bet that this “other white meat” cooked to the USDA-recommended temperature of 145°F (63°C) will be juicy, tender, (possibly) pink, and safe for your family.

Shop now for products mentioned in this article: