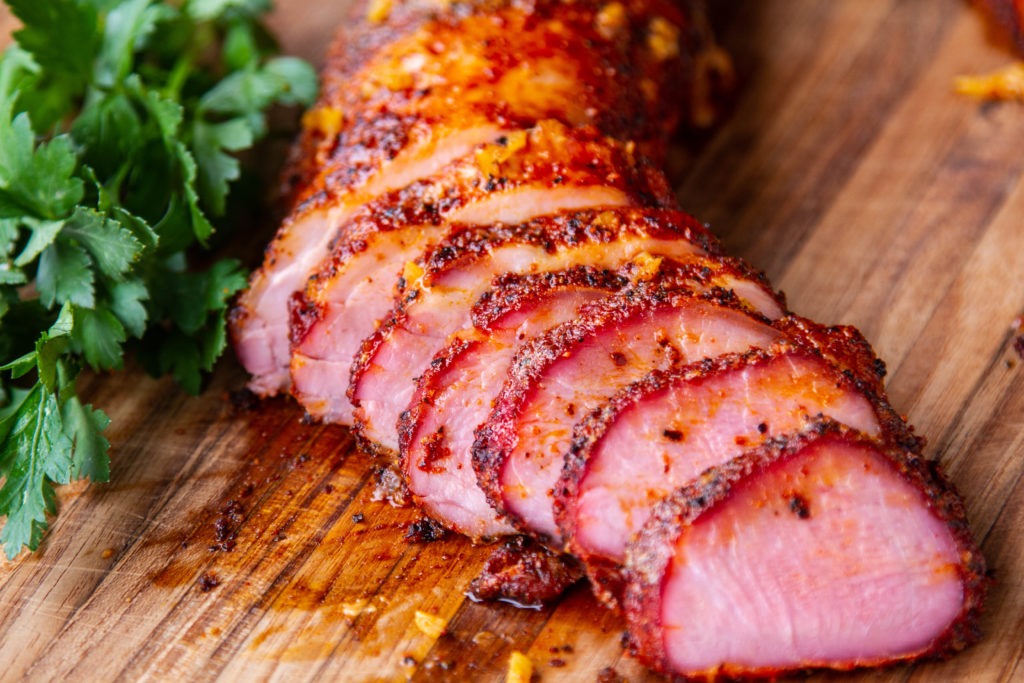 If you want a fast, tasty meat that works as well for a weekend night meal as it does for an impressive weekend gathering, look no further than pork tenderloin. Pork tenderloin is very tender and juicy when cooked properly, but there are a couple of challenges that make it easily prone to overcooking. Keep reading and learn how to cook up the juiciest pork tenderloin ever, and get a recipe inspired by Jess Pryles for an apple-cider brined smoked pork tenderloin!

What is pork tenderloin?

Tenderloin is the pork equivalent of (you may have guessed this) the tenderloin of beef. That’s the cut that gives us the chateaubriand as well as filet mignon steaks, known in anatomical terms as the psoas major. Like the beef tenderloin, this muscle is little used in the hog, and so grows tender. It has a distinct lack of connective tissue throughout the muscle and also has very little fat marbling.  The lack of connective tissue makes it easy and fast to cook, as you don’t need to let it cook for a long time to allow the collagen that inhabits so many other cuts to dissolve.

You should know, though, that pork tenderloin and pork loin are not the different names for the same thing. The loin is the longissimus dorsi, the muscle that is equivalent to the strip steak and part of the ribeye. It rides above the rib cage, while the tenderloin is tucked just below it next to the spine, and has a much larger diameter and length than does the tenderloin. A whole loin can be a few feet long, while a tenderloin is usually about 10-12″.

So what does that mean for you? in some ways not much. They’re both tender, they’re both lean, they both present some cooking challenges. But the tenderness of the tenderloin does exceed that of the loin, and because of its smaller diameter, it is also a faster meat to cook.

As noted above, pork tenderloin is very lean—much like a chicken breast. Fat contributes to the feeling of juiciness in cooked meat, as well as contributing greatly to flavor. Lean meats easily become very dry when overcooked by even a couple of degrees.

Aside from the challenges presented by the leanness of the meat, there is another consideration that we must examine: shape.

Pork tenderloin is an unevenly-shaped cut of meat. Thick at one end and tapered at the other—just like a beef tenderloin. Left as-is, this cut will be dry and overcooked at the tapered end by the time the thicker end reaches its pull temperature.

To prevent the lean tenderloin from drying out, track its internal temperature as you cook. This is critical to avoiding dry, unpleasant pork, and we recommend monitoring your pork temperature carefully with a SmokeTM (or other) leave-in probe thermometer. For food safety, pork needs to reach a temperature of 145°F (63°C), but you shouldn’t leave it on the heat for even a degree more than that.

As for the leanness/flavor problem, just be sure to properly season your pork. In the case of this recipe, we’ll soak it in an apple cider brine and rub it with BBQ rub, then douse it with a buttery sauce. Of course, you don’t have to go that far. Salt and pepper do fine, and allow you to taste the meat more directly. If you’ve gone to the trouble of sourcing really high quality pork, don’t overdress it.

The problem of pork tenderloin’s uneven shape can be solved in either of two ways.

In our Baked Chicken post, we pounded unevenly-shaped chicken breasts to a uniform thickness to encourage quick and even cooking. A similar approach can be taken with pork tenderloin, with the added step of butterflying the cut first.

This preparation works very well for quick, high-heat methods of cooking such as broiling and grilling. You can cook it on a 500°F (260°C) grill in just a few minutes, and it’s delicious. In a high-heat scenario like that, check the temperature of the meat frequently with a Thermapen® Mk4

The other way to handle the uneven shape is to simply tie the tapered tail end underneath the rest of the roast. Simply fold an inch or so of the taper under the rest of the loin and tie it with some butcher’s twine. If you have a real butcher in your area, they should be happy to do this for you. By tying this thin bit under, you create a mostly uniform thickness throughout the length of the cut, which is a good thermal space to work in. All the temperature gradients along the roast should be even, meaning your tenderloin will cook to the same degree of doneness all the way down the cut. This method will work for high heat applications like grilling or broiling but really lends itself better to smoking or roasting applications. In the recipe below, we tie the roast and then smoke it—monitoring with our Smoke thermometer—creating tender, evenly cooked medallions of pork.

You can use whatever sauce you like for pork tenderloin, but in this case, we decided to play off the apple flavors of the original recipe and go a step further into the arena of “nice weekend dinner,” a BBQ-themed Buerre Blanc sauce (pronounced burr-blahnk). This is a sauce that is interesting from a temperature standpoint. To make a beurre blanc, minced shallots are cooked in white wine until almost all the liquid has evaporated (the term here is au sec), then it is removed from heat and chunks of cold butter are whisked in. The butter melts but, if done correctly, doesn’t break its emulsion. This gives you a pourable, spoonable, basteable sauce that is basically liquid-solid butter. In this case, because we have apple cider in the brine, we used hard cider instead of white wine and we added some finely diced apple with the shallot and used BBQ rub for the salt. We basted the result onto the hot pork tenderloins which caused it to melt in the photos, but more would be passed at the table for serving. High-class meets BBQ!

Recipe based on Jess Pryles’ recipe.

By evening out the thickness of the oddly shaped tenderloin and by taking into account its lack of fat and connective tissue, you can make pork tenderloin that is truly different from all the dry, overcooked pork of your past—it is almost unrecognizable as the same meat that gets so dry and tough. This almost-silky textured meat is an amazing treat and easy to achieve with proper temperature management thanks to the Smoke and the Thermapen Mk4. So remember: cook that pork to 145°F (63°C) and not a degree more!