O, tacos! Will I ever tire of writing about you? I think not! If I haven’t said it before, I’ll say it now, and if I have said it before, I’ll say it again: tacos are one of the best foods. Savory meats, fresh ingredients, bright, spicy toppings—there is so much to love. And, look, I know Cinco de Mayo is not a holiday that almost anyone in America celebrates for the right reasons and that it has a different meaning to the people of Mexico, but I’ll take any excuse to cook and eat tacos. This gem in the culinary crown of the great global cuisine that is Mexican Food shines even more brightly when you manage to make it yourself. For this reason, we bring you this post about cooking tacos al pastor: so you can go out and make some wicked good tacos for your family.

And, since we’re ThermoWorks, you know we’re going to guide you through the thermal principles involved in this cook so that you not only how to cook it but understand why you’re cooking it that way. Yes, you know we’ll be breaking out the thermometers, in this case, Smoke X2™ and our Classic Super-fast® Thermapen®. Let’s dive in.

One of the major taco styles in Mexico is the taco al pastor, meaning “in the style of the shepherds.” It is made of pork, usually tough cuts like shoulder, sliced thinly and marinated in a rich and spicy paste, stacked on a spit and roasted—gyro style—before being sliced from the spit with a knife and piled into warm corn tortillas with fresh or grilled pineapple and strafed with onion and fresh salsa.

This method of preparing pork is so delicious that it makes no sense to confine it to tacos alone. Yes, we’re going to be making tacos al pastor here, but by all means use this method for cooking the meat in burritos, tortas, scattered over a plate of nachos, or even atop french fries along with salsa, cotija cheese, and sour cream or crema.

You may or may not remember that we published a post on tacos al pastor some time ago wherein we discussed their history, their descent from Lebanese shawarma, and a terrific method of making them without a spit. Today we bring you another version, but this time on a vertical spit. While the marinade and basic ideas are very similar to the method we wrote about before, there are significant thermal differences that arise from the change in geometry.

The major difference between the loaf-pan method and the spit method is that there is much, much more exposed surface area when you stack your meat on a vertical spit. Since pork shoulder is high-collagen meat, it wants to go through a stall. As the connective tissue proteins unwind, they release water which works its way to the surface and evaporates, cooling the meat. In the case of the loaf-formed al pastor, that wasn’t a problem, as there was very little surface area even exposed to the air. In this case, however, we have a ragged, shaggy cylinder of meat that has a lot of exposed surface area. This means that a trompo (the Mexican term for a vertical cooking spit loaded with meat) of pork al pastor will go through a stall.

So do we have to wrap it? An excellent question! If this were a brisket or a whole pork shoulder, the impulse to “crutch” the meat would be strong. But there is yet one more geometry to consider before we go trying to swath our pork in foil: the geometry of the individual pork slices.

Remember that the point of cooking most BBQ meats to such a high temperature—often in the neighborhood of 203°F (95°C)—is to dissolve the collagen enough to make the food palatable. but by slicing the meat thinly on a deli slicer before we cook it, we shorten and cut many of those long/tough proteins mechanically. Thin-sliced meat needs less tenderizing than whole-muscle meats, which means we don’t have to go all the way through the stall to get good meat.

In fact, our target temperature for pork al pastor is about 155°F (68°C), just a few degrees above the minimum doneness temp for pork, 145°F (63°C). Use the probe from Smoke X2 parallel to the spit to keep an eye on the temperature in the center of the meat stack, then verify the temperature with your Thermapen when your alarm sounds.

(By the way, this is not a dish to judge doneness on only by how it looks. It looks gorgeous and delicious well before it is food safe. A thermometer is really the only way to go here.)

What temp to cook al pastor at?

Part of the fun of tacos al pastor is the crusty, crunchy bits that come from the edges of the meat that are exposed to the heat, and we certainly want those! To achieve crunchy-browned goodness we put our trompo into a smoker running at 350°F (177°C), regulated with our Billows™ BBQ-control fan. (As there is no real smoke flavor to be had at that temperature, you could just as easily do this in your oven.) The higher heat will provide the Maillard browning that will make the dish come alive.

Once your meat reaches the pull temp, take it from the smoker/grill/oven straight to the table where your warmed tortillas await with all your toppings. Then slice the trompo around the outside, making cuts about the width of your pinky finger—or even thinner. Forget carving a Thanksgiving turkey at the table. This is the carving presentation you want.

Once you’ve made this recipe, you’re definitely going to make it again…and again. There is joy to be had not only in the eating of the tacos you’ll get from this, but also from the stacking, this smelling, and the slicing—all of which are incredibly fun. Bring a perfectly temped—thanks to Smoke X2 and Thermapen—trompo to table and you’ll feel like a genuine kitchen hero. And when your family or friends start piling that succulent, savory meat on their tacos, they’ll think of you as the Ignacio Zaragoza 2 of your dinner.

A recipe with temperature tips for an al pastor trompo from which to make tacos, burritos, or anything you want. Marinade recipe adapted from SeriousEats.com.

Special equipment: a vertical roasting spit. We used one from Trompo King. 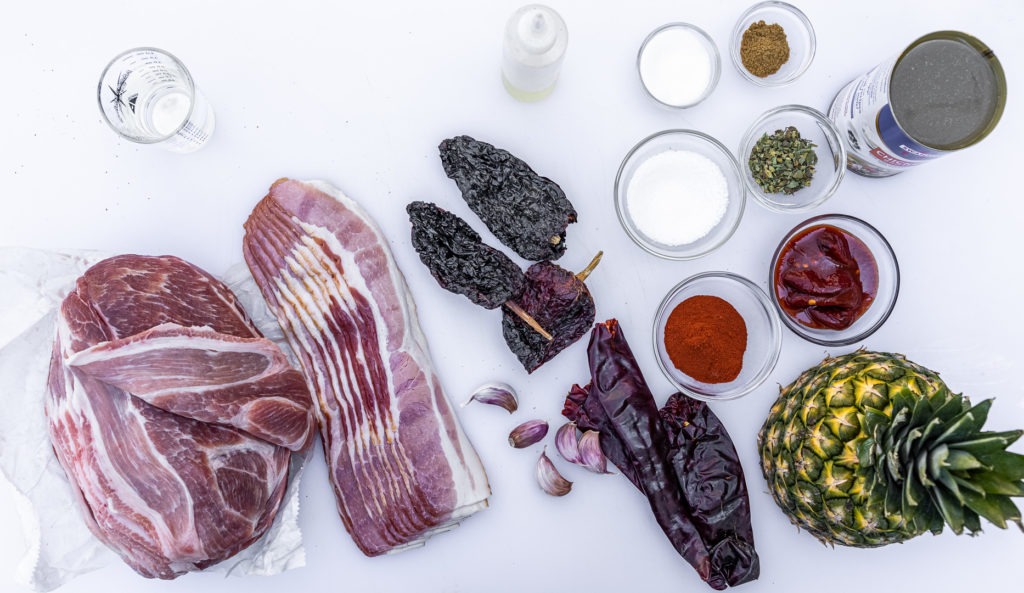 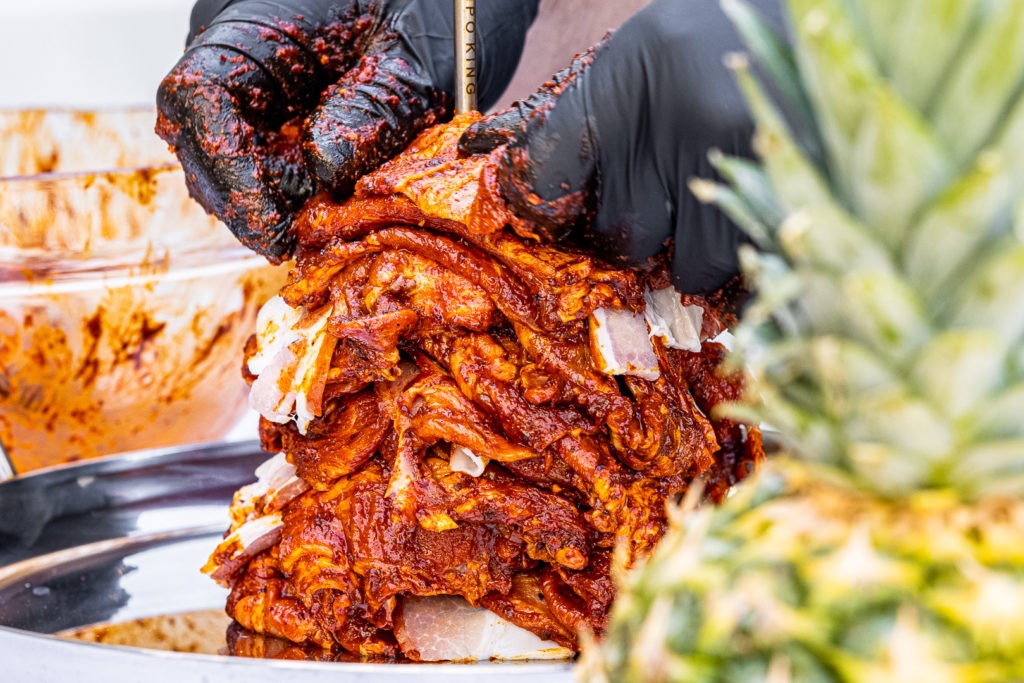 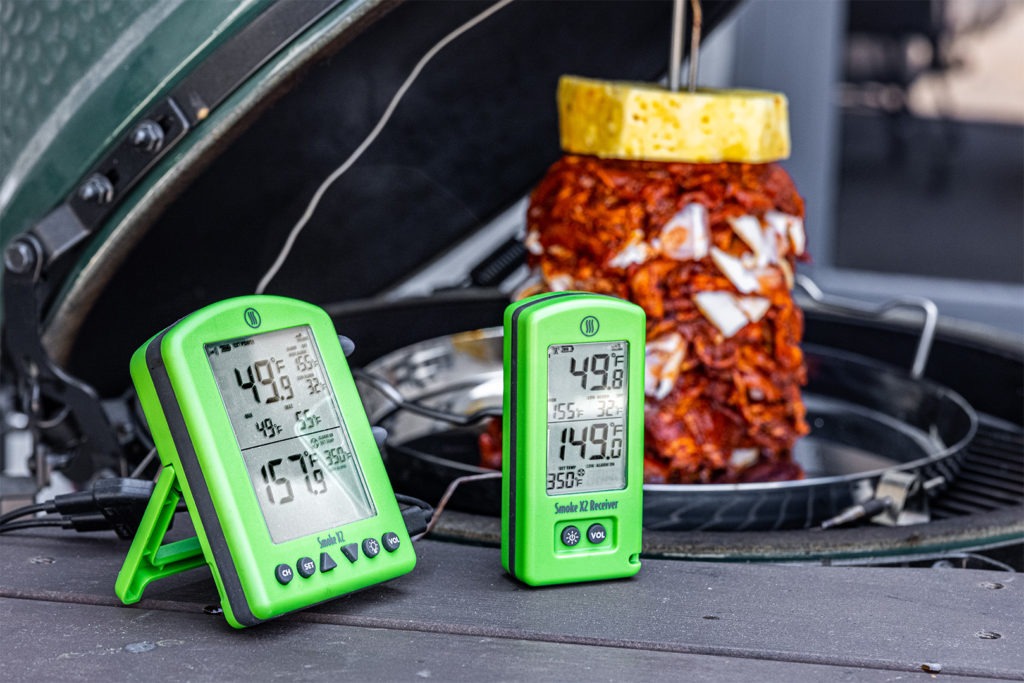 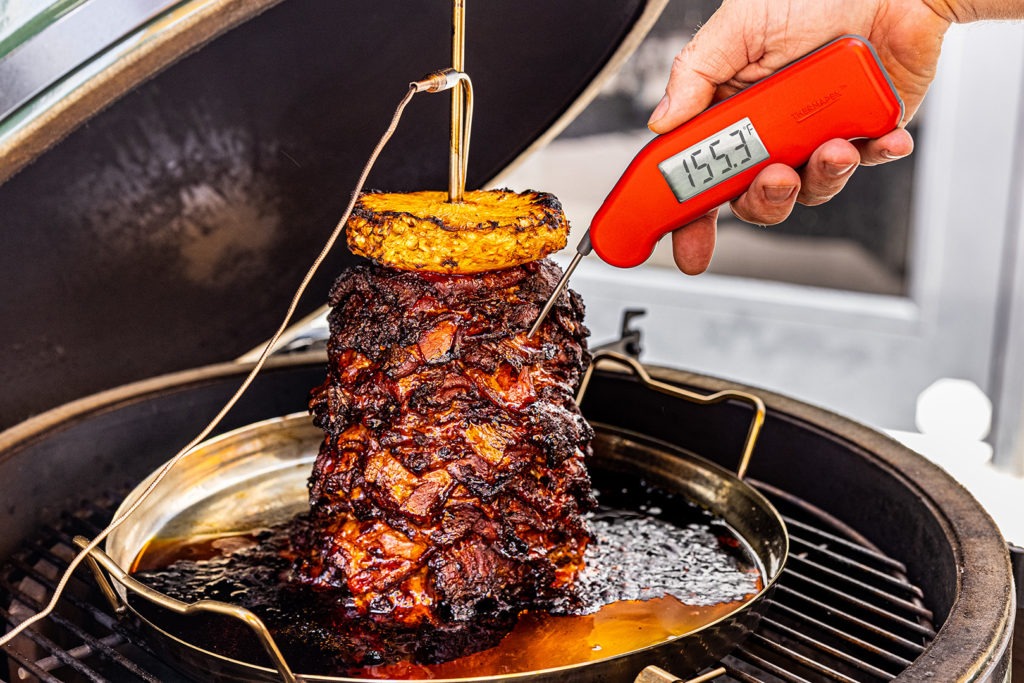 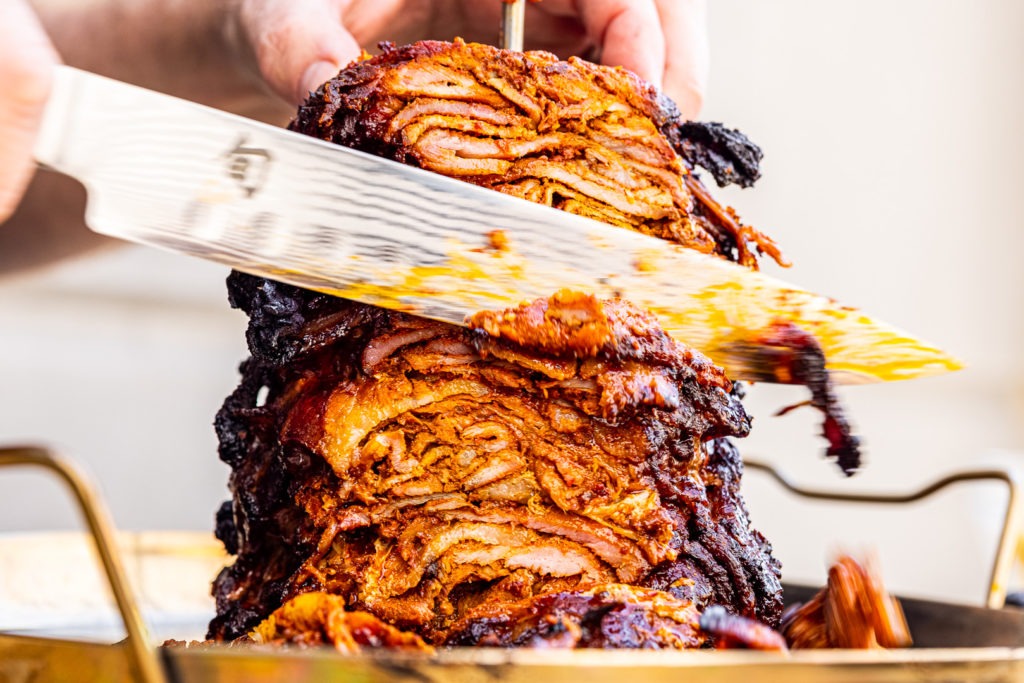 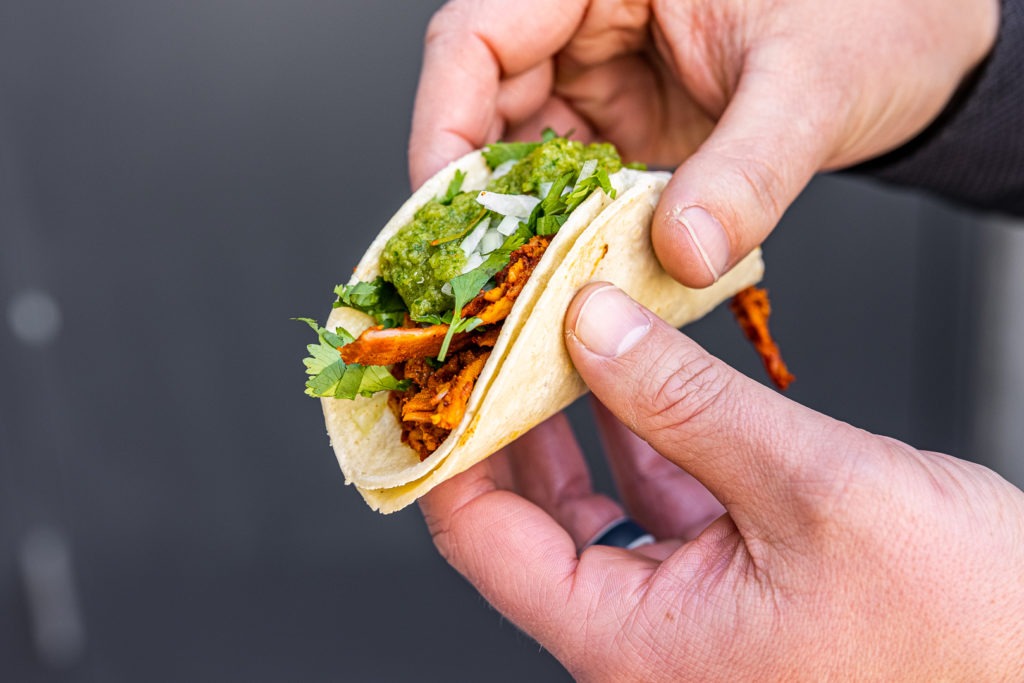