Cinnamon rolls are a special treat just right for Christmas morning. But with their sugary filling, cinnamon rolls can be difficult to bake just right. They’re often pulled before they’re baked through completely, resulting in rolls with a doughy center. They may still be raw in the middle when they look done on the outside.

One easy way to know if your cinnamon rolls are done is by quickly checking their temperature at the thermal center with an instant-read thermometer, of course! 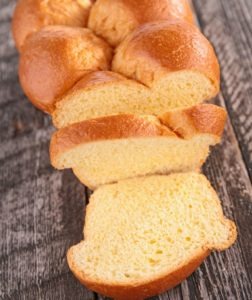 Brioche: For our Christmas morning cinnamon rolls we used a brioche (pronounced BRĒ-ôsh) dough because of its light and tender texture and rich flavor. Brioche is a rich yeast-risen dough with French origins. Its rich quality comes from the high amount of eggs and butter in the dough. The fat makes the finished product extremely soft and tender and gives very rich flavor. Brioche can be shaped and made into braids, loaves (pictured at right), and many types of sweet rolls like cinnamon rolls.

In the category of yeast bread, there are rich doughs and lean doughs, each with their own recommended pull temperature ranges. Rich doughs (like brioche and challah) should be pulled at an internal doneness temperature of 190–200°F (88–93°C) while lean doughs (like baguettes and ciabatta) are best pulled at 200–210°F (93–99°C) (see bread and other chef recommended food doneness temperatures in our Learning Center).

Temperature control is critical from start to finish with this project. As mentioned in our Temperature Tips for Thanksgiving Rolls post, dough temperature directly affects the fermentation process. Brioche is a dough that requires a lot of mixing. Mixing creates friction, which increases the temperature of the dough. It’s important that the liquid ingredients and the butter are cold when they are first introduced into the dough so that the dough’s temperature doesn’t get too high during mixing. For all of the temperature spot-checking in this project, an instant-read digital thermometer is the best tool for the job, and we used a Thermapen® Mk4. 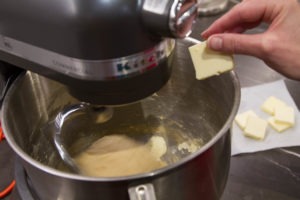 When moisture is added to wheat flour and is mixed, gluten begins to develop. Fat interferes with gluten development and shortens the gluten strands, breaking down the structure it had developed. Gluten is developed first when the dough is made, then the butter is incorporated gradually. The once tight dough will seem to fall apart once butter is added.

It’s important to continue mixing after the butter is incorporated to strengthen the gluten again. This lengthy process of adding little chunks of butter and redeveloping the gluten each time is what can increase the dough’s temperature so much. Cold butter helps. The dough’s final temperature should be 75–77°F (24–25°C).

The dough is then fermented at room temperature (68–75°F [20–24°C]) for an hour, then stretched, folded, and refrigerated overnight (at least 4 hours, but overnight is best).

Large amounts of sugar slow the growth of yeast by dehydrating the cells, so sweet doughs are often made with more yeast than ordinary breads, and they may take longer to rise. —On Food and Cooking, Harold McGee

The slower chilled fermentation also develops complexity in the dough’s flavor and texture (our Thanksgiving Dinner Rolls post has more information on cold fermentation and its effect on yeast doughs). The high amount of butter in the dough makes the dough firm when it’s chilled. This makes the dough easy to roll into a perfect rectangle. And after it’s filled and rolled up, the cinnamon roll log will hold its shape and cut into individual cinnamon rolls more easily than with dough at room temperature.

From Bouchon Bakery by Thomas Keller

This paste spreads on easily and evenly and makes it easy to roll up the dough tightly without it falling apart. You can use the traditional method of brushing on melted butter then sprinkling with brown sugar and cinnamon with this recipe if you would like, or give the cinnamon filling a try!

Once they’re done, remove from the oven and let them cool at room temperature while you make the icing.

Make the icing: Whisk together 2 cups of powdered sugar and enough cream to make icing that’s just thin enough to drizzle. Drizzle or spread the icing over the cinnamon rolls and eat them warm! There’s really nothing quite like fresh brioche that’s still warm from the oven. It’s pillowy-soft and so rich.

Once you give brioche a try you may be hooked! Temperature control with the ingredients and the dough are the secret to its success and make for a memorable treat anytime.