You are here: Home / BBQ / Roast Chicken on the Smoker with Sauteed Brussels Sprouts: temperatures for success
Author: Martin Earl

There are few dishes that are as simple yet impressive as well-roasted chicken. Done right, it is good enough to serve to guests without a lot of fuss to prepare. And a smoke roasted chicken? Well, that’s just tasty. Smoked chicken takes a little longer to prepare, but the end result is succulent and juicy with stunning golden brown and crispy skin.

The original recipe calls for this bird to be roasted in an oven, but we thought (correctly) that smoke roasting it would add a great flavor dimension. Plus it would give us a chance to show off the new ThermaQ® WiFi in its home environment.

As this chicken is slow-roasting in a smoker, it will be held to a lower temp than it would normally be in an oven. That’s how we get a good smoke. We will make sure that our final cooked chicken temp is 160°F (71°C), which, while lower than the 165°F (74°C) often cited, will allow the chicken to rest and carryover cook up to a perfect doneness without drying the meat out. Leaving chicken on to cook until it reaches 165°F (74°C) would result in a higher temp because of carryover from our high-temperature finish, and would yield dry, tough meat.

We will verify this final temp with our Thermapen® Mk4 by inserting it fully into the breast and pulling it slowly through, looking for a lowest chicken temp of 160°F (71°C)

The ThermaQ WiFi’s two channels will give us unprecedented accuracy while allowing us to go about our lives while constantly monitoring the temp of the chicken and the smoker. We’ll keep our smoker in the neighborhood of 250°F (121°C). We’ll set the meat temperature alarm for 140°F (60°C) to cook the smoke into the chicken. When that temp is achieved, we’ll stoke our smoker up to 450°F (232°C) and reset our meat temp for 160°F (71°C). This high heat blast through the last 20°F (11°C) of cooking will give our chicken skin a nice crispness as well as a golden-brown burnished color.

As we will be cooking at a lower temp than called for in the original recipe, we decided to spatchcock (butterfly) the chicken by cutting out its backbone and smashing it flat in order to maintain some of the speed of the cook.

Spatchcocking is a great way to speed up the cooking on any fowl, and is actually especially great for the smoker because it also increases the surface area exposed to the smoke. Faster cooking and more smoke exposure? Sounds good.

We’re going to do a dry brine on this chicken because we want it to be extra tasty and juicy. The recommendation from Cook’s Illustrated for 6-24 hours to dry brine a whole chicken. we’ll hit the short end of that, tracking the brine with our TimeStick®. If you don’t have that long, try to give it at least 1 hour of brining—even that much will help your chicken’s flavor and moisture.

We have often put compound butters under the skins of our poultry as a means of delivering flavor and retaining moisture in the meat, but this recipe goes a step further with the addition of the breadcrumbs to the butter. Usually, the butter under the skin would melt and eventually drain away, leaving behind the seasonings that we mixed into it, along with a faint buttery taste. By mixing breadcrumbs into the butter in an equal proportion by volume, we create a medium for the butter to be absorbed into. Rather than draining off, the butter stays in the breadcrumbs, creating a rich, buttery anti-stuffing around the bird.

Finally, we’ll serve the chicken with a simple recipe of sautéed Brussels sprouts, the sweetness of which goes great with the lemony, smoky flavors of the chicken. And so we present:

Roast Chicken on the Smoker with Sauteed Brussels Sprouts Recipe 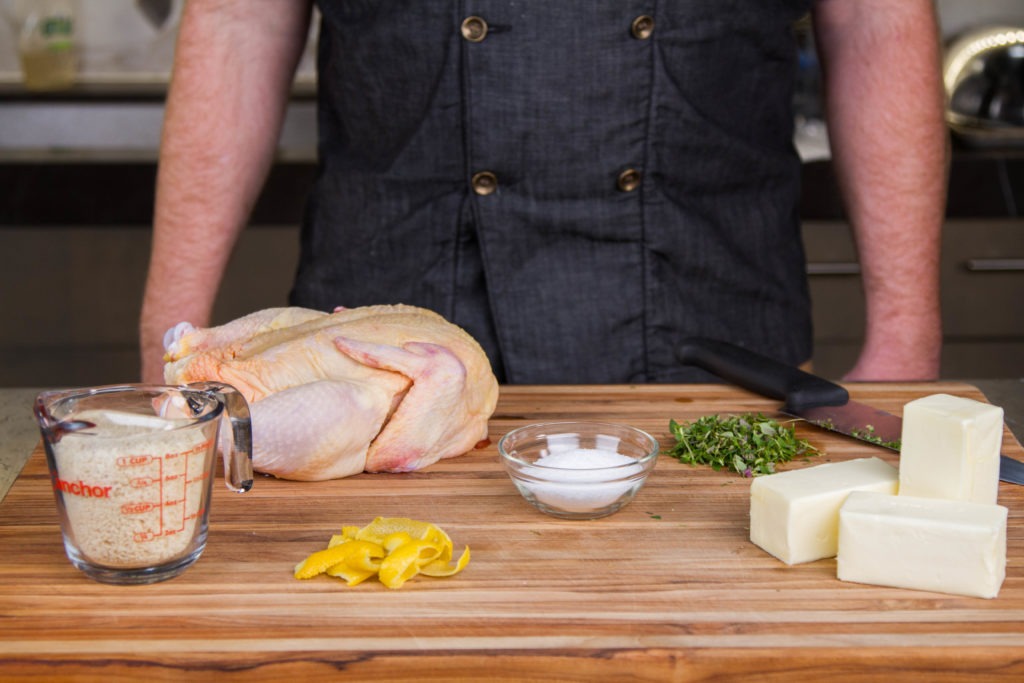 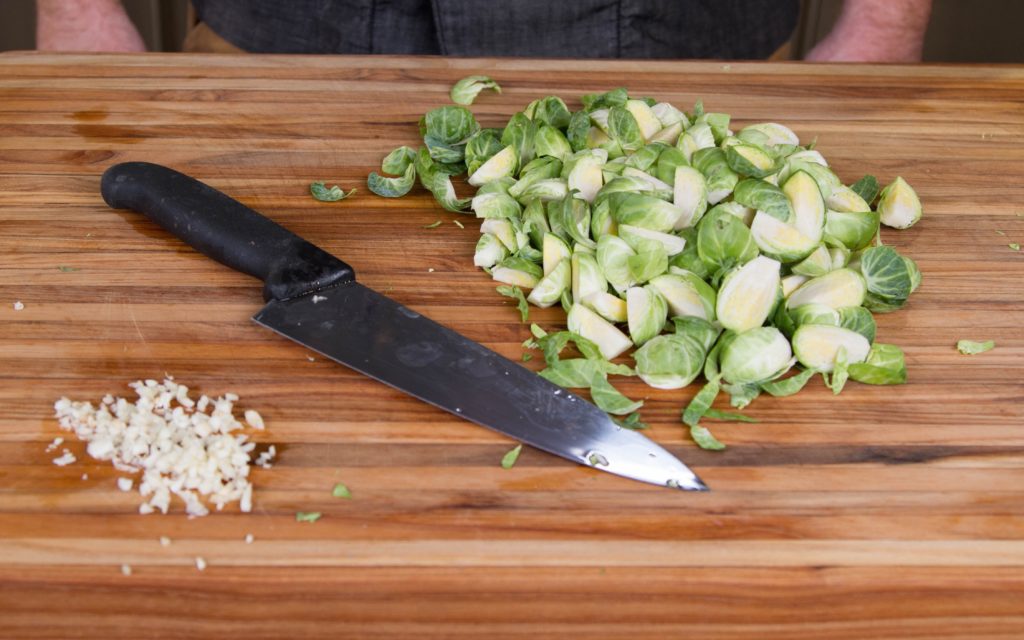 Plate the carved chicken with the sauteed Brussels sprouts. 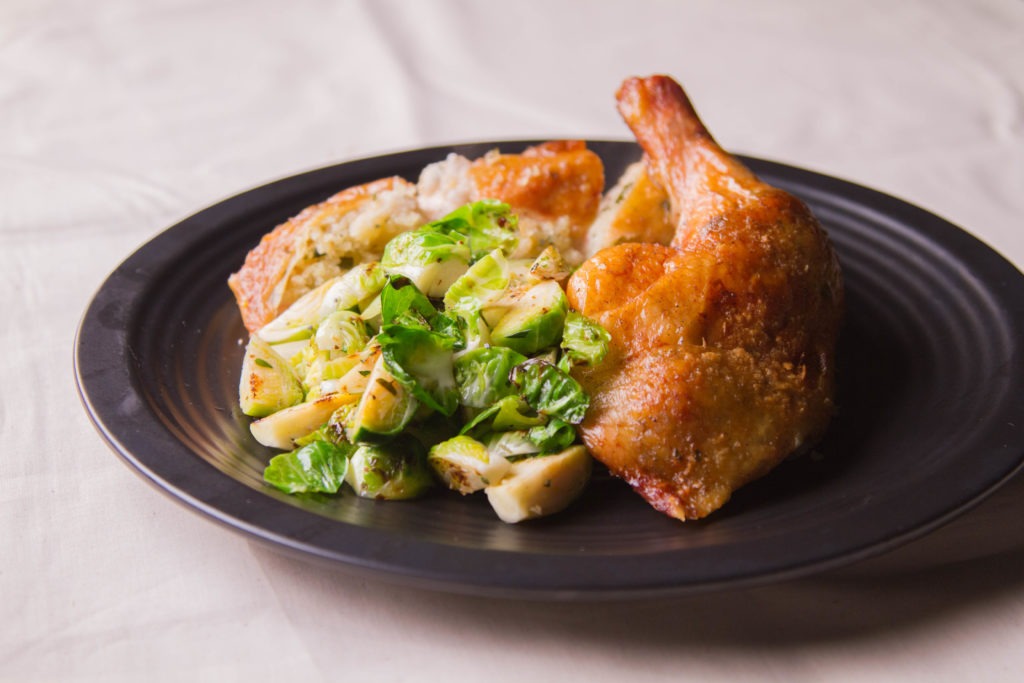 With careful temperature control from your ThermaQ WiFi, and a few sauteed micro-cabbages, you’ve easily created a meal fit for a king on your humble smoker. If you don’t have a good smoking thermometer, pick one up and get smoking today!