Home » Everything You Need to Know About Grilled Chicken Wings
Jump to Recipe
Author: Martin Earl

Whatever happy accident of history led to the development of the spicy chicken wing—a history that is shrouded in uncertainty, controversy, and spurious claims—I’m glad it happened. The collision of crisp-skinned wings with smooth, spicy/vinegary sauce has created one of the greatest finger foods on the planet.

The first and most popular way to cook wings is, of course, to fry them. But just because frying them is the well-deserved default, doesn’t mean that we can’t cook them another way. In fact, grilled wings are delicious. The skin still crisps, but you get just that wisp of smoke and a kiss of char that shake the flavor up just a bit.

Here, we’ll look at how to grill chicken wings—from seasoning, to temp and sauce tips—so that you can enjoy these meaty treats in a new way.

How to grill chicken wings

The trick with grilling wings is to cook them at a high enough heat to crisp the skins, but a low enough heat that you don’t burn the skins in the time it takes to cook the meat. BBQ-great, Malcom Reed uses the Weber Vortex to cook his grilled wings. By placing all the charcoal in the center of the grill, contained in a cone, you create a ring of semi-indirect heat in which to cook the wings. We wanted the same effect, without the use of another piece of equipment. So we spread our coals, in a thin layer, over the entire bed of the cooker. A surface temperature of about 425°F (218°C) is what you’re after. This direct cooking over a medium-high heat gives the skin a nice crispness without fear of burning.

Chicken wings, being dark meat, are safe to eat at 165°F (74°C), but they won’t be as tasty as they could be until 175°F (79°C). Dark meat is richer in connective tissue which needs to dissolve into gelatin to be palatable, and that doesn’t happen until around 175°F (79°C). Using a fast and accurate thermometer, like the Thermapen® will take the guesswork out of cooking, ensuring proper doneness for each wing.

Why not fry? That’s a good question. Consider a couple points. First, by not frying, we can add layers of flavor to our wings. We use a BBQ rub on them in this case—a rub that would normally float away in the fryer. That means deeper flavor, and that’s great. Of course, we’ll also get flavor from the grill itself, with tasty bits of char on each wing.

But more importantly, you get all the wings done at once. Frying takes minutes per batch, which leaves hungry family and friends eating all the wings while you fry and sauce, fry and sauce. By grilling your wings all at once, you get everyone eating at the same time.

Use a big bowl to sauce them all together and get eating.

What kind of wings should I use for grilled hot wings?

Though you can use party wings on the grill (they may cook a smidge faster), we went with full wings. Those nooks and crannies in the wing joint take up more sauce, and that is definitely a plus!

Though you can use any sauce you want for chicken wings, I like the classic spicy cayenne pepper sauce. Use your favorite cayenne pepper sauce—Louisiana-style versions are great!— and heat it to just over 100°F (38°C). Then stir in cold pats of butter, which will emulsify in the sauce, creating a luscious, rich texture that will adhere well to the wings.

Whatever you use for sauce, this method of emulsifying cold butter into a warmed sauce base is a great way to get that chicken-skin-coating yumminess that you want.

Grilled chicken hot wings, based on recipes from HowToBBQRight.com and HeyGrillHey.com 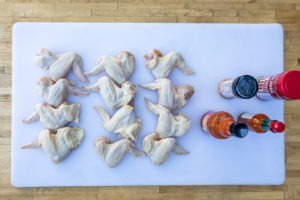 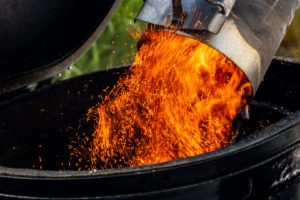 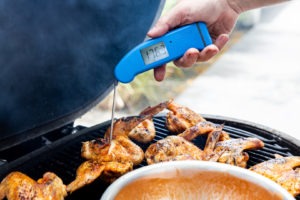 These wings are so delicious! The BBQ seasoning adds depth that I frankly didn’t expect, and the sauce clings just perfectly to the skin of each piece. Biting in, you find that cooking to 175°F (79°C) using the Thermapen® yields perfect texture inside. Of course, you don’t have to give up fried wings, but maybe save those for indoor-cooking months like, say, early February.

Now, in the heat of summer, grill your wings and enjoy.