Some of my fondest memories of camping and otherwise being in the mountains are with campfires. One thing can always be guaranteed, if there is a campfire, someone is bound to pull out a bag of marshmallows. One of the beauties of campfire cooking is its simplicity. No extravagant preparation methods; and if you forget your roasting skewers don’t fret, all you really need is a stick! 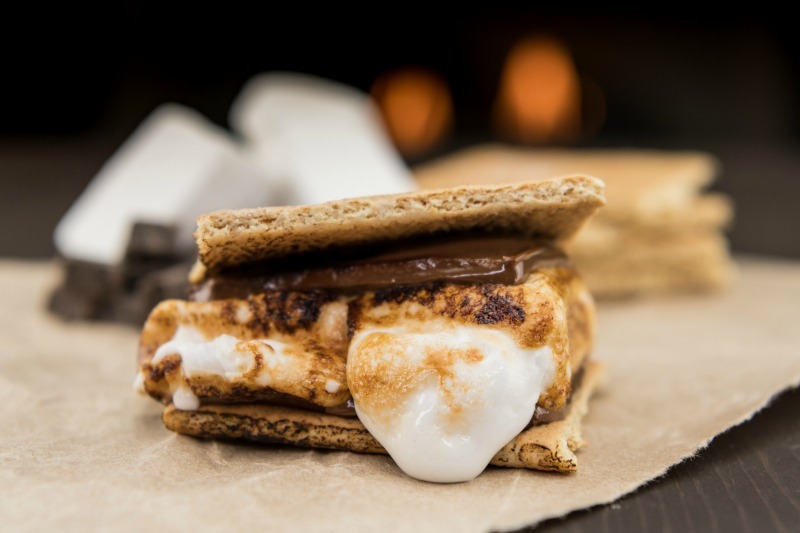 S’mores have been a campfire favorite in the US and Canada since the 1920s. The first written recipe for a s’more was in a book of recipes published by the Campfire Marshmallows company where it was called a “Graham Cracker Sandwich”. In 1927 a recipe for “Some Mores” was published in Tramping and Trailing with the Girl Scouts. There aren’t many foods with legitimate American origin, but this seems to be one. This American classic is certainly worthy of its own day. If you didn’t celebrate National S’mores Day on August 10th, there is still time to commemorate this sweet with National Toasted Marshmallow Day this Sunday on August 30th. 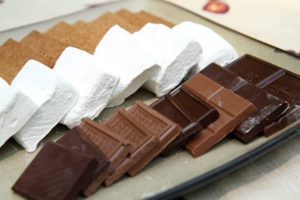 1. Graham Crackers The graham crackers add flavor, but mainly a crispy texture to the s’more. You can think of them as the component that holds in the sticky ingredients to keep your hands clean! We made our own graham crackers using a recipe from marthastewart.com.

2. Marshmallows In a s’more, the marshmallow is the star of the show. It adds flavor, a sticky, gooey texture, and is the heat source that melts the chocolate. We couldn’t use graham crackers made from scratch and then store-bought marshmallows, so we used another recipe from marthstewart.com and whipped up our own home made marshmallows. In making the mallows there are two main components: unflavored gelatin and cooked sugar.

I won’t go through each step in the process, except to say that accurately tracking temperature is critical when cooking sugar. The sugar needs to reach soft ball stage (235ºF-240ºF [112ºC-115ºC]). If the temperature is too low the marshmallow will be too soft and won’t hold its shape. Too high of a temperature will cause the texture to become far too sticky and the marshmallows would likely pull out your fillings. A Thermapen or Thermopop is perfect for spot checking the temperature of your sugar.

3. Chocolate The perfect chocolate in a s’more will have a flavor that doesn’t overpower the marshmallow and the graham cracker and should melt readily without becoming too liquid and dribbling down your shirt. We had an arsenal of five different chocolates to test: Lindt milk and dark chocolates, Ghirardelli Dark, Hershey’s Symphony, and a Reese’s Peanut Butter cup.

What Were We Looking For?

What is the perfect toasted marshmallow? The sought-after characteristics are a crisp, nicely browned not burned exterior with a warm, soft, gooey center. What will the internal and external temperatures be at this stage?

Wanting to create authentic conditions, we departed from our test kitchen and had our marshmallow roast near our office up American Fork Canyon. With the help of a few former boy scouts, firewood, and some trusty lighter fluid, our campfire was ready to go in no time.

We quickly found that dual-pronged roasting skewers are the best tool to keep the marshmallows from sliding around and possibly falling during roasting. Confectionary sacrifices are simply unacceptable when the mallows are homemade.

Putting it All Together

Since the toasted marshmallow is the heat source for melting the chocolate, it is immediately taken from the campfire to the graham cracker and chocolate. Within a matter of moments, the chocolate begins melting and oozing over the edges of the marshmallow. Each chocolate’s result was different. Starting with our favorite, this is how we ranked them:

1. Lindt, milk: Fluid consistency of the melted chocolate, and balanced perfectly with the flavors of the marshmallow and graham cracker.

3. Ghirardelli, dark: Slightly more viscous than the Lindt when melted, and not only was the dark chocolate flavor too strong, but tasted unpleasantly sharp.

4. Hershey’s Symphony: This chocolate was still a bit thick after melting, and we felt like it was far too sweet.

5. Reese’s Peanut Butter Cup: Chocolate and peanut butter are a match made in heaven, but the peanut butter flavor was too much for the s’more to handle. Not our favorite.

Even with something as simple as a s’more, the temperature really does matter. Reaching soft ball stage when making the marshmallows is critical, and there truly is a specific temperature window for the perfectly toasted marshmallow.

Don’t just take our word for it; this weekend go on a hike or head out to your backyard, light a campfire and test your own toasted marshmallows.