At time of writing, it is a cold, biting January day here at ThermoWorks— the kind of day that makes you want to hunker down, read some cookbooks,2 and eat something warm, hearty, and comforting. What is one to do? Go outside and smoke-braise a beef shank, of course!

This dish is just the thing to hunker down with. It’s rich, it’s tender, it’s meaty and juicy and good. It also takes a good, long time to cook. Let’s take a look at a great method (based on one from Jess Pryles) for smoke-braising a whole beef shank, including the temps you need to know.

What is beef shank?

Beef shank is the lower part of the upper leg of beef. (Though you can also but shanks of veal, lamb, or pork, all of which are wonderful.)

Beef shank is a relatively lean cut of meat that is very flavorful, making it popular for ground beef. The presentation we’ll be working on today is a whole shank on the bone, which is really the way to go if you want to smoke this cut—smoking the deboned individual muscles just lacks…pizzazz. After all, with the large bone, this is a cut that can make a great presentation piece.

Finding it might not be the easiest thing. Whole shanks aren’t available at every grocery store meat-counter every day. You are more likely to find slices of shank sold as meat for the incredible Italian dish, Osso Bucco. (Osso Bucco is properly made with veal shank, but beef can be used.) The shank we were able to find was butchered and tied, which, if it’s available to you as an option, I would highly recommend. There’s a good deal of trimming to be done on a shank, and it’s porbably going to turn out better if someone else does it for you. Getting one that is trimmed of all of the copious silver skin, cut from the bone, and then tied back is a strong move. If your butcher can order a shank in for you, they can also probably trim it up for you.

Why you should smoke-braise beef shank

Smoke-braising means smoking a cut of meat for a time to imbue it with flavor, then enclosing it in a humid environment with some liquid to cook the rest of the way. The braising step helps tough cuts break down more easily, and that’s why it’s important for this particular cut. As I said, shank is the leg of the beef. And being the support for the whole animal, the shank is positively chock-full of connective tissue that needs to be broken down. Even with the braising step, a beef shank can easily take nine or 10 hours to tenderize fully. But when it does, it’s worth it. The meat goes from stringy and chewy to soft and delicate, and you get loads of gelatin-rich juices from it that mingle with and add to the braising liquid.

Because it is so lean, the meat can seem a little dry once it is shredded, but you can moisten it with a cup or so of the meaty braising liquid. It will adhere and soak in nicely without making it seem soupy. The rest of the juices can be used for dipping sandwiches!

You could, of course, just braise a shank; and if you don’t have a smoker, or just don’t want to go outside to use it, you should. But that smoky edge with the flavor of the beef is so good, and the beautiful red of the smoke ring is a shock of color that adds great visual interest to the dish.

For a piece that takes as long as this does, you actually cook it at a relatively high temperature: the smoker is set to 275°F (135°C) for the duration of the cook. The shank is smoked for 2.5 hours before the braising step begins, then it is placed in a foil pan and liquid is added. We used a combination of beef broth and pale beer, but you can use any liquid you like.

We used a Smoke® X2 to monitor the meat temp and the smoker temp and it’s a good thing we did. We were using a pellet smoker, but still set up our air probe in the pit, and if we hadn’t had a low alarm set for the air-temp channel, there’s very little chance I would have noticed that we ran out of pellets as early on in the cook as we did. The combination of the cold weather and medium-high pit temp ate our pellets up faster than expected, and the low-temp alarm on the Smoke X2 alerted me to the fact. As cold as it was during our cook, we couldn’t afford a gap in the heat.

This cook is definitely worth doing. Shank is fairly cheap if you can find it, and the results are super satisfying. Of course, you don’t have to keep this cook to the winter months, it will be every bit as good served burger-style around a picnic table as it will be served along with mashed potatoes while huddled inside against the cold. But no matter when you make it, be sure to keep track of those critical temps! Make sure the meat gets up to at least 200°F (93°C) and that your smoker stays at around 275°F (135°C)—thanks Smoke X2!—the whole time. It’ll be a long journey from raw to done, but it’s a journey that’s worth taking, even in winter.

Smoke-braised whole beef shank, based on the method from Jess Pryles. 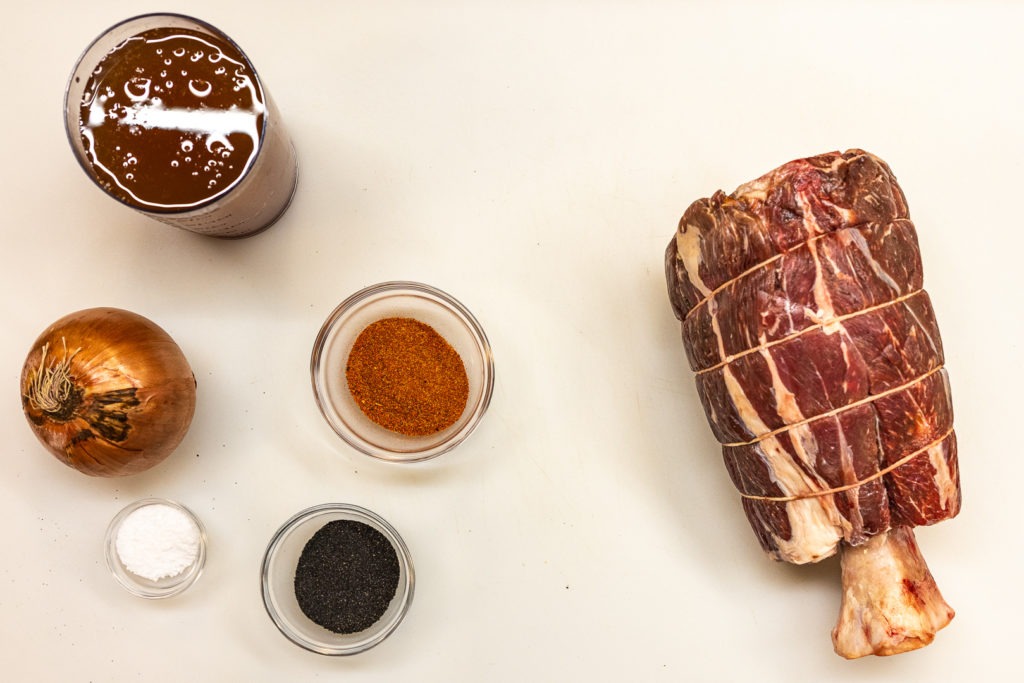 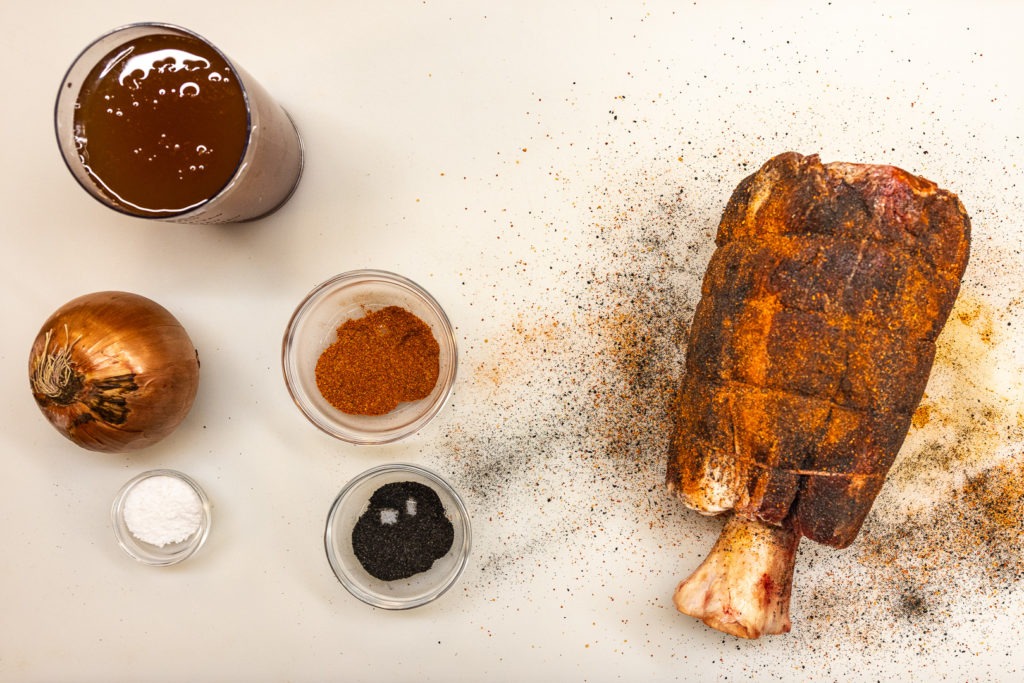 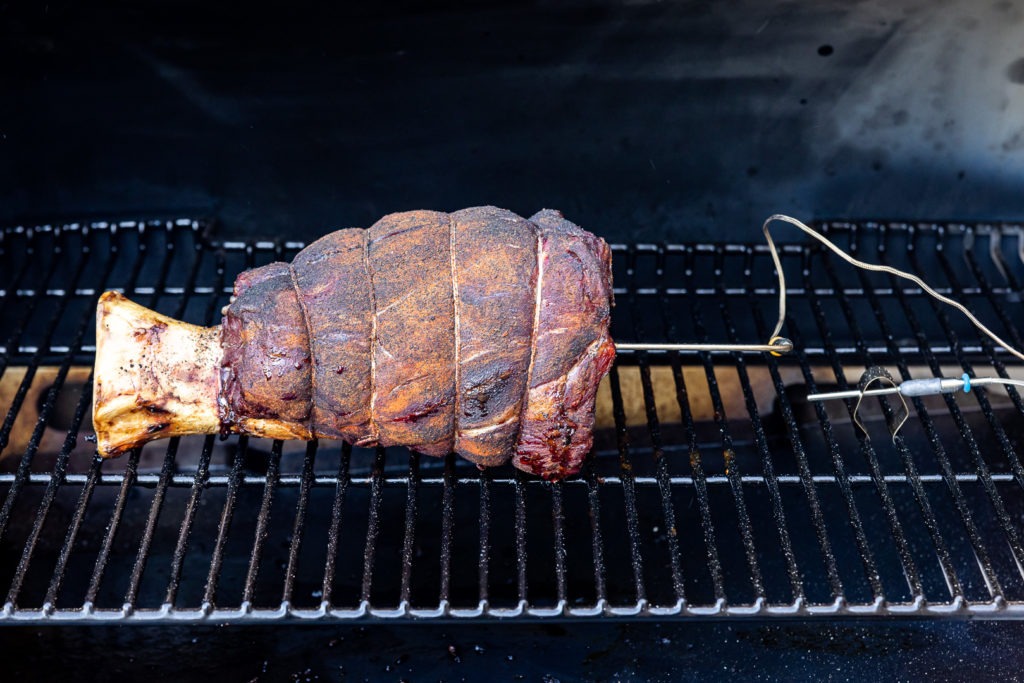 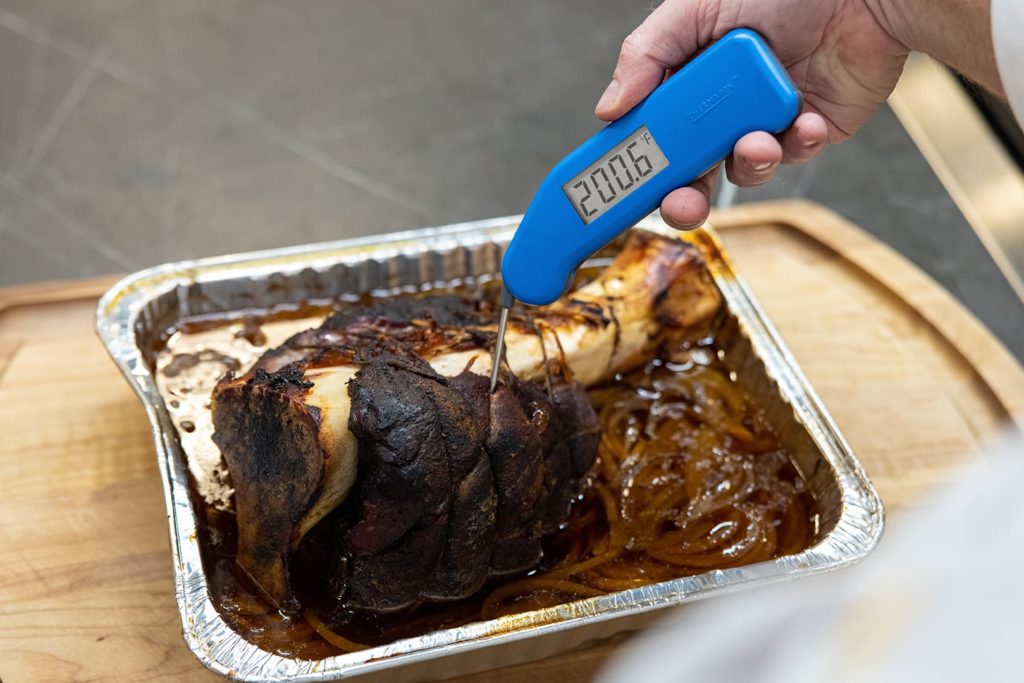 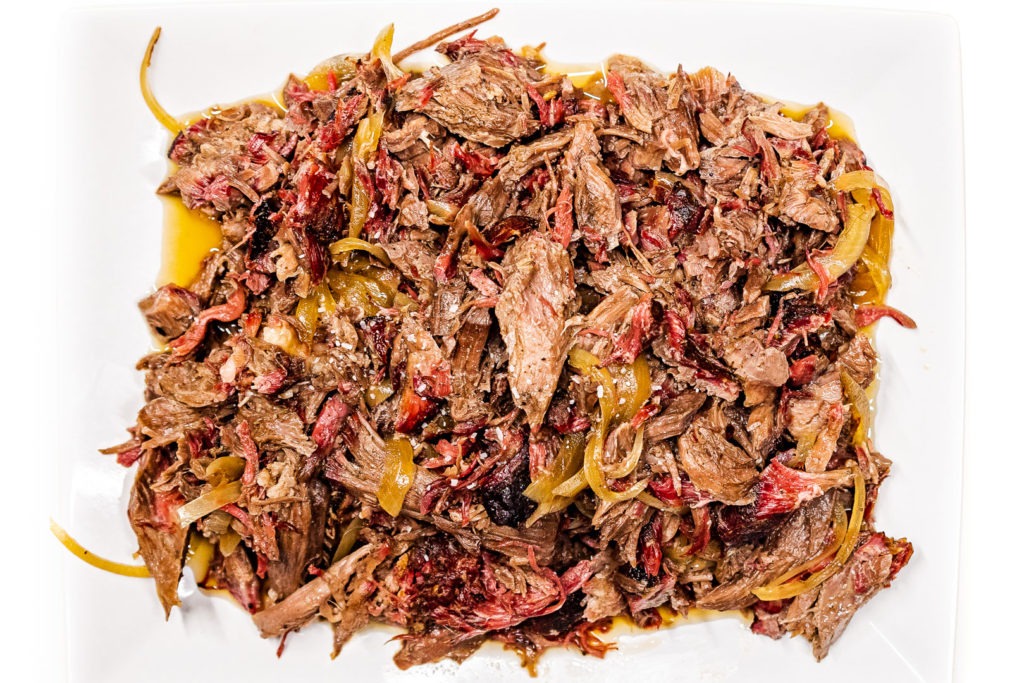 To save time, heat your braising liquid to nearly boiling right before adding it to the braising pan. Then you don’t have to bring it up to cooking temp in the smoker.

Also, we used fresh onions for this cook, but in the future, I would caramelize those first. This is about one and a half steps away from french onion soup in the pan, and using sauteed onions would get it that much closer and improve the flavor of your dipping juices even more.