You are here: Home / BBQ / How To Cook Beef Tenderloin on a Smoker
Author: Martin Earl 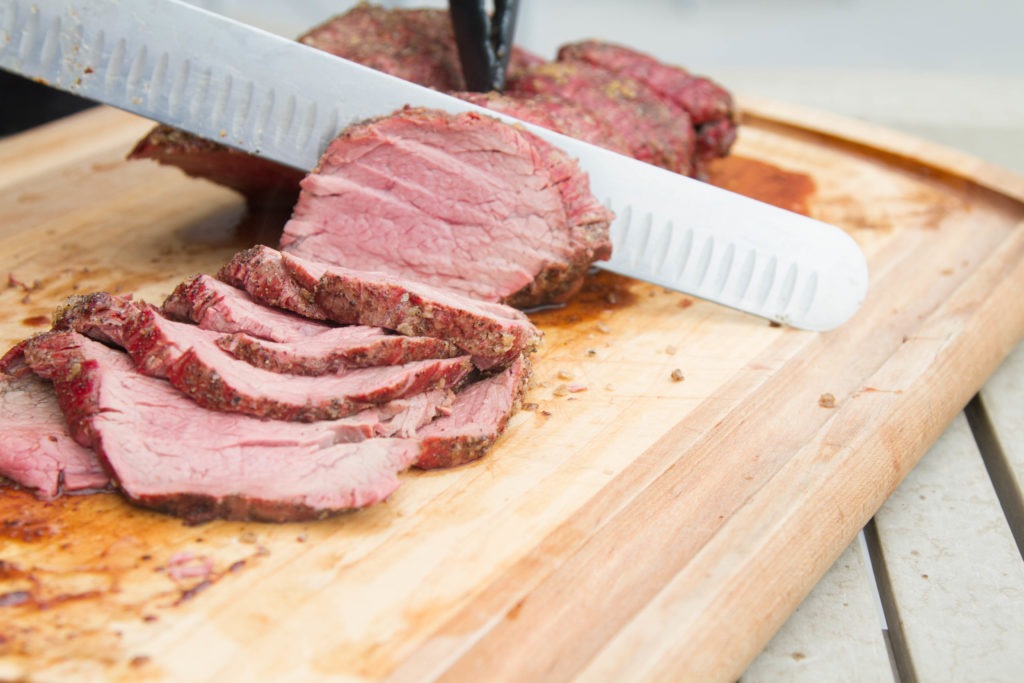 Dust off the cobwebs, bread out the charcoal, get your wood lumps ready…barbecue season is BACK! If you are not one of those that cooks through the winter, then it’s time to get your ‘cue going again. In today’s post, we’re hoping to get you excited for the smoke/grill season with two of our favorite words: smoked tenderloin.

This dish is a killer combination of fun smoke flavor and total beef tenderness, and it’s only going to take about an hour. But hold tight, let’s look at what’s going on.

As you may have seen on our blog before, tenderloin comes from one of the most under-used muscle areas on a cow, meaning it is exceedingly tender. But this tenderness is accompanied by an extreme leanness, meaning the meat can be easy to overcook and dry out.

We ran tests to find out whether a traditional high-heat cook in the oven was the best method of cooking this cut, and we found that lower and slower heat yielded a more evenly cooked tenderloin than did the heat-blast method, without taking too long to cook.

The advantages of this lower-temp cooking method include edge-to-edge pinkness without almost any gray band, and a decreased risk of overcooking an expensive cut of meat. But this method also means that tenderloin is an ideal cut for smoking! Low, slow cooking is, of course, the mantra of the pitmaster, and the tenderloin plays very well by those rules.

The lack of connective tissue separates the tenderloin from the traditional smoking meats like brisket, pork shoulder, and ribs, but that actually plays to our advantage. Tenderloin will be done at around 125°F (52°C), meaning you won’t have to get past the dreaded ‘stall,’ and you don’t have to wait for collagen to break down into gelatin. You just get the meat warm enough to become palatable to you, and it’s done. There’s no pressure on the muscle fibrils to expel their water, no extreme denaturizing of the proteins, just a perfect medium rare (or medium, depending on your taste) tenderloin.

For the exact degree of doneness that you like, use the ThermaQ® to monitor the meat temperature. The type-K probes are accurate to ±0.7°F (±0.4°C), and the alarms can be set for temperatures between degrees (i.e. tenths of a degree). There is no more accurate thermometer for the barbecue, and it will allow you to cook you tenderloin exactly how you like it.

How to Smoke the Tenderloin

For this cook, we followed Steven Raichlen’s recipe for whole smoked tenderloin, which is as basic a recipe as you can get but is wonderful for how it showcases the tenderness and succulence of this mild cut of beef. Strongly flavored rubs will hide the flavor of a tenderloin, so a simple rub with salt—and/or smoked salt— and pepper is all that is needed. The meat is put on the smoker without an initial sear and is cooked at a mere 300°F (149°C). If you wanted to drop that temp even lower, to a smoker temp of ~220°F (104°C), you absolutely could. It will take longer, but even more smoke flavor will imbue itself into the meat.

You will also want to trim and tie the tenderloin (or have a butcher trim and tie it for you). Tying the tenderloin creates a more uniform shape along the length of the meat, which means more even cooking. If the tail is flopping around in the smoker, it will be well overcooked by the time the center is done. A cylindrical shape is very effective for even heat transfer, so that’s what we’re shooting for.

Based on Whole Smoked Tenderloin With Ember-roasted Peppers, by Steven Raichlen

A tenderloin is a great way to kick off the BBQ season, because it’s easy, it’s fast, and it’s incredibly delicious. And with your ThermaQ, you can monitor this expensive cut to a perfect doneness that will be the envy of all your BBQ friends.