You are here: Home / Tips / The Super-Fast® Thermapen® and its evolution in color
Author: Kim Allison

“Any customer can have a car painted any color that he wants so long as it is black.” – Henry Ford

It used to be that consumers had two choices when it came to purchasing their favorite wares – take it, or leave it. Model T’s were black. Computers (then called typewriters) were black. Television sets were small, came with three channels and – you guessed it – were only available in black (and white).

Accessories, add-ons and color variations were virtually unheard of. But now, in a world where products are as diverse as the people who use them, consumers demand the latest and greatest in design and technology; and the Super-Fast Thermapen is no exception.

When gray was all the rage

Early on, the Thermapen was similar to the Model T, the typewriter and television in that it was only available in one color – gray. We know what you’re thinking, “Who’d want a gray Thermapen?”

Well, believe it or not, the Super-Fast Thermapen was originally designed and developed as a professional tool for labs and manufacturing plants. As a result, early colors were designed and coded for use in those environments – hence a grey colored Thermapen.

As the Thermapen became faster and more accurate,  the manufacturer introduced a second – and arguably more exciting color – white. Gray and white were very popular in laboratory and manufacturing settings where clean and sterile instrumentation is of the utmost importance – and it didn’t hurt that they were lightning fast!

Commercial kitchens and the emergence of a rainbow of colors 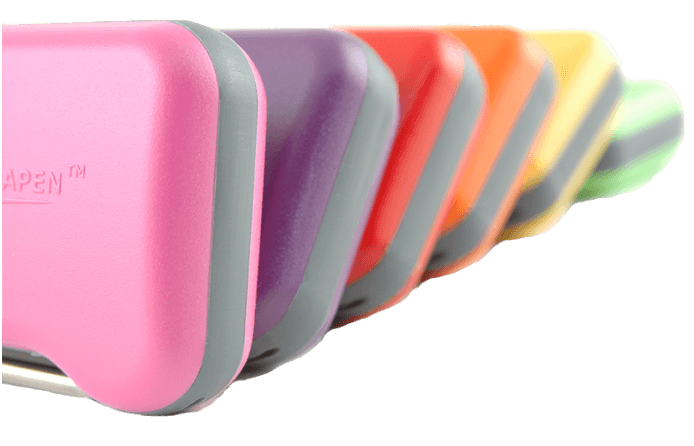 Food safety guidelines require a color coding system to reduce cross contamination and the spread of food borne bacteria. Anyone who’s familiar with working in a busy kitchen knows that red meat is prepared on a red cutting board, yellow for chicken, blue for seafood, green – produce and brown for all cooked meats. Later colors of the Thermapen directly coincided with these color-coding standards.

Not only were Thermapens built for speed and accuracy, but also designed to reduce cross contamination, which in turn can help reduce the risk of food borne illness – who knew? 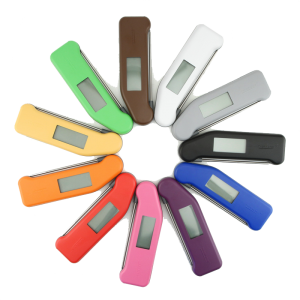 Today, new colors are continuing to be introduced in an effort to keep up with the consumer demand for an evolving product line. Although no longer connected with the food safety color code system, new colors: black, orange, purple, pink, teal, British Racing Green and the latest Flame Thermapen remain popular choices for celebrity chefs, competition BBQ’ers, and backyard aficionados across the country.

While each Thermapen is built to function the same (Super-Fast temperature readings in 3 seconds or less), everyone knows that the fastest Thermapens are _______!