Bacteria is everywhere. Wash your hands, wash your food; it’s still there. The trick is to kill just enough of them so it won’t make you sick. However, Sun Tzu, author of the Art of War, tells us before we can kill them, we must first get to know them.

Without getting too scientific, it’s important to know that bacteria can function and reproduce as individual cells, although they often aggregate in multicellular colonies. They are surrounded by a cell wall (a big reason why they’re so hard to kill) and they reproduce by binary fission (they don’t undergo sexual reproduction). Some species form extraordinarily resilient spores, which makes them stronger and even harder to kill. 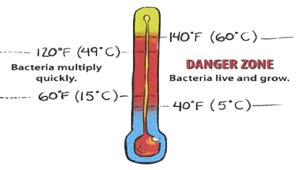 Bacteria grows best in moist environments where the temperature of food is between 40-140°F (4-60°C). This temperature range is called the “danger zone” because food in this zone can become unsafe to eat very quickly. In fact, at room temperature, bacteria growth can double every 20 minutes.

To put that in perspective, let’s say there are 10 microorganisms on a given piece of food and that food is being kept in the danger zone. After one hour, that number would swell to 80. After two hours, 640. And after six hours of being held at temperatures between 40-140°F, there would be over 2 and a half million microorganisms on your food. DON’T EAT THAT!

What do you do with a bacteria colony the size of Chicago living on your food? Common sense says to throw it out, however, some people believe that putting it in the freezer will kill them and return it to a safe state. That is NOT the case.

Fortunately for you, we know how to kill ‘em. As the temperature begins to creep out of the danger zone (above 140°F) bacteria will stop multiplying. Once you’ve slowed down their reproduction, you can crank up the heat and really do some damage. Cooking foods at 165°F (74°C) or higher will quash any bacterial uprising and ensure your food is safe to eat.

The longer food is heated above 165°F, the more bacteria you’ll kill. Unfortunately, this is a double-edged sword. Many chefs will tell you the longer you cook something (at high heat), the chances of it retaining moisture and flavor diminishes. If you’ve ever eaten a steak that’s been cooked past well-done, you’ll know exactly what we’re talking about.

You’ll never be able to get rid of every bacterium in your food. The trick is to kill just enough of them with temperature and then let your digestive system do the rest. Keep your eye out for Bacteria: The war won with temperature (Part Two) where we’ll take a look at temperature devices and how to properly take your food’s temperature.