When roasting a turkey, many people have had great success using an oven alarm thermometer in conjunction with their Super-Fast® Thermapen®.

They are often used in tandem because the Thermapen cannot be left in the oven to continuously monitor internal temperatures. Even though a Thermapen is fast enough for you to open and close an oven door with minimal heat loss, a great cook knows that any fluctuations in temperature are not helpful when trying to produce an evenly cooked roast. 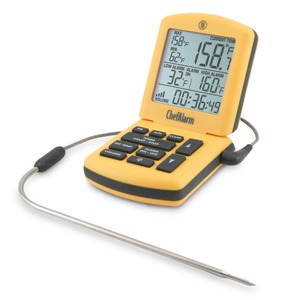 The new ChefAlarm® oven thermometer is the ideal solution for monitoring a turkey as it roasts. Use ChefAlarm’s Pro-Series® High Temp Cooking Probe (range up to 572°F) to monitor the internal temperature of the bird as it cooks. Temperature information is relayed by a high-temp cable (range up to 700°F) to the meter, which sits on the counter beside the oven.

ChefAlarm shows you a continuous display of real-time temperatures making it possible to know what’s happening without having to open the oven door. Set a high alarm to sound when you’ve reached your target internal temperature. A low alarm comes in handy during the resting process, but more on that later.

Prior to placing your turkey in the oven, insert the High Temp Penetration Probe into the thickest part of the turkey breast. Position the probe tip toward the center making sure to stay away from the cavity and bone. Set the high alarm to sound at least 10° below your final target temperature.

The only drawback to using an oven alarm thermometer on its own is that you can only monitor one location at a time (i.e. where you place the probe). That’s where using the Thermapen with ChefAlarm can be a real advantage. 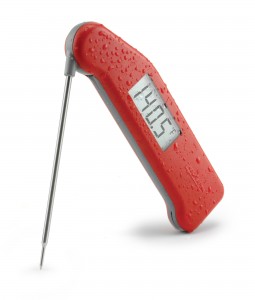 ChefAlarm lets you know when you’re getting close to your target temperature, and the Thermapen confirms the temperature in several locations. When your alarm sounds, probe the breast and thigh on both sides with your Thermapen to ensure you’re getting an even distribution of heat and not overcooking your turkey.

When your high alarm sounds and you’ve confirmed that temperatures are right where you want them, it’s time to let the meat rest for at least 30 minutes. As latent heat on the surface of the bird makes its way to the center you’re likely to see temperature increase by as much as 10 to 12°. Keep your High Temp Penetration Probe in place and monitor this rise as it happens.

The continuous Max temperature display will show you how hot the bird got when you stepped away. Set the low alarm to sound when your turkey’s temperature has met, or dipped below the temperature at which it’s ready to serve.

Ideal temperatures (after the rest) for the breast and thigh are 157°F and 169°F respectively. If you’re worried about serving turkey below the USDA recommended 165°F (i.e. 157° in the breast), consider what Food Scientist Jeff Potter writes in Cooking for Geeks, “pasteurization time for poultry at 155°F is less than one minute.” Use your Thermapen to ensure that your stuffing has reached at least 165°F.

If you’re currently only using one of these tools (the Thermapen or ChefAlarm), you’re doing pretty good. On their own, each instrument has its strengths. But, using them together will go a long way to ensure that a perfectly cooked turkey is on your list of things to be thankful for this Thanksgiving.