Home » What Kind of Thermometer Do I Need?
Author: Tim Robinson

We get this question a lot: “What kind of thermometer do I need?”

The simplest answer is that you actually need two thermometers: 1) a digital instant-read and 2) a cooking alarm thermometer.

Why two? Because they do different things. 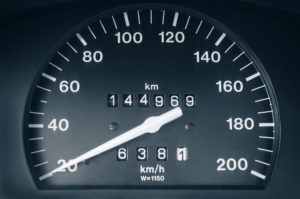 An instant-read thermometer allows you to quickly check the temperature of a food in different places in rapid succession at a single point in time, while a cooking alarm thermometer allows you to track changes in temperature at a single fixed point in the food over time. (Think of it like having both an odometer and a speedometer on your car. One tells you how far you’ve come, and the other tells you how fast you’re going right now.)

It all has to do with something called temperature gradients. Most people think of foods being at one single temperature throughout. As in, “That chicken breast is now 159°F (71°C).” The truth is that foods are almost always at many different temperatures at the same time while they are cooking. A chicken breast on the grill may be at 159°F (71°C) in one spot, at 176°F (80°C) closer to the surface, and way down at 143°F (62°C) nearer to the center of the breast. 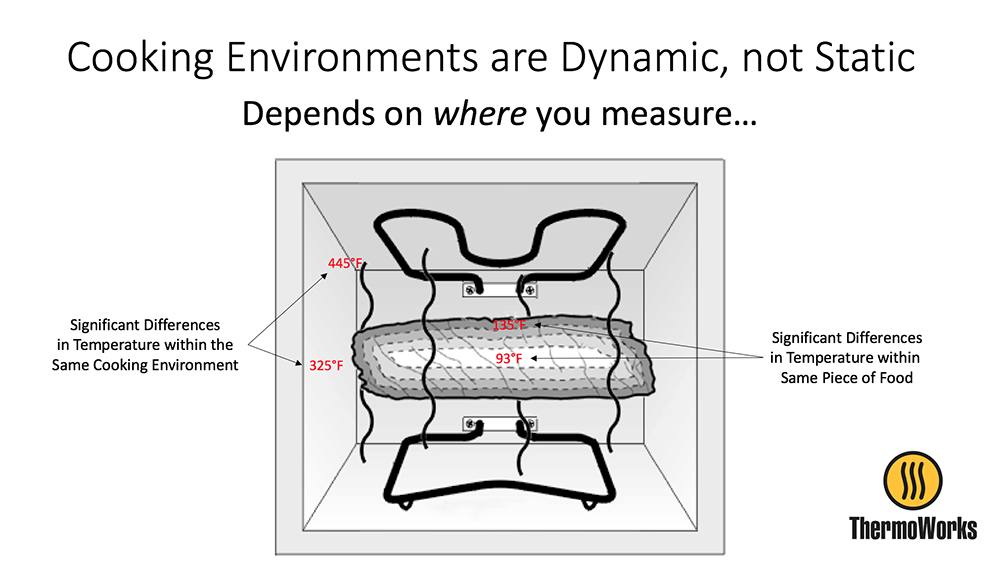 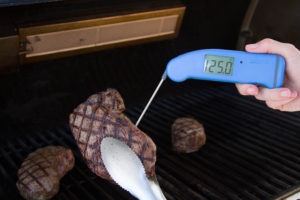 A super-fast instant-read, like the ThermoWorks Thermapen, will show you all of those gradients. The numbers on the display will change as you pull the probe tip through the meat (or cake or yogurt or whatever else you are cooking) in different places.

But you can’t leave a Thermapen in the oven to track changes over time. And all of those temperatures will continue to change as the chicken breast continues to cook, from the outside in. That’s where cooking alarms come in.

Cooking alarms, like the ThermoWorks ChefAlarm, come with a probe that you can leave in the oven (or smoker) and a cable made to withstand being shut in the oven door. Carefully place the probe tip as near to the center of the food being cooked as possible and you can monitor cooking over time to see when you’re getting close to being done. The ChefAlarm comes with an alarm that beeps and flashes when the temperature of the food as measured by the probe at that single point gets to the number you entered as your final temperature. But the cooking alarm probe doesn’t move, it just stays where it’s put.

That’s why you need an instant-read, as well, to verify that there aren’t, in fact, any lower temperatures to be found elsewhere in the food. When your cooking alarm sounds, simply open the oven door and quickly check for the lowest temperature in the food with an instant-read by pulling the probe tip through the food in different places to see if any of the numbers you see are lower. If they are, return the food to the oven and check again in a few minutes.

ThermoWorks sells many different models of cooking alarms, from the simple DOT, the workhorse ChefAlarm, and the BBQ alarm Smoke, all the way up to the speedy, highly accurate thermocouple ThermaQ series of alarms.

So now you know. Next time someone muses aloud, “What kind of thermometer do I need?” you can reply, “I believe you mean ‘thermometerS.’ You need a cooking alarm and a fast and accurate instant-read.” And you’ll be right.