ThermoWorks is proud to have been selected as an official House Purveyor of the James Beard Foundation. 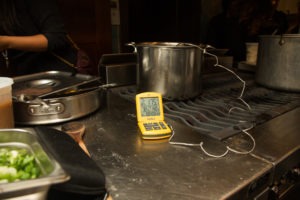 Our company is the exclusive provider of thermometry equipment for the prestigious James Beard House kitchen. Chefs from around the world have the opportunity of using ThermoWorks products when visiting their kitchen. This foundation, in the spirit of James Beard’s legacy, continues to educate and influence individuals who love and prepare food.

Who is James Beard?

“The Dean of American Cuisine”

Born in Portland, Oregon in 1903, James Beard was a legendary culinary trailblazer. In 1935 Beard began his cooking career by starting a catering company called Hors d’Oeuvre, Inc. with his friend Bill Rhodes. This business venture was launched to supplement income from his non-lucrative career as an actor. With this catering company, he capitalized on the cocktail party craze of the day, and it lead to lecturing, teaching, and writing his first cookbook, Hors D’Oeuvre and Canapés that was published in 1940. According to Julia Child, this book put him on the culinary map, and “through the years he gradually became not only the leading culinary figure in the country, but ‘The Dean of American Cuisine.'”

Between 1945 and 1955 Beard wrote several cookbooks, appeared in his own segment in the first television cooking show on NBC in 1946, contributed several articles to Woman’s Day, Gourmet, and House and Garden, served as a restaurant consultant, and ran his own restaurant in Nantucket. In 1955 Beard founded the James Beard Cooking School. Over the thirty years after starting the school, he continued teaching cooks and writing books (20 all together). James died on January 21, 1985, and his names lives on as a legacy synonymous with culinary excellence and integrity.

In honor of James Beard, the James Beard Foundation was established in1986 and its purpose is “to provide a center for the culinary arts and to continue to foster the interest James Beard inspired in all aspects of food: its preparation, presentation, and of course, enjoyment”. The House kitchen was originally intended as a performance space for chefs. Monthly dinners showcasing chefs who had not yet received recognition was a tradition that began in 1987—Wolfgang Puck was the first such guest chef. More than 250 events are hosted by the James Beard Foundation annually.

You may have heard of the James Beard Foundation Award before. This prestigious award for excellence in food and beverage-related industries began in 1991.

Two other individual awards are selectively given each year.

We at ThermoWorks are honored to be partnered with this well-respected organization, and are pleased that our company’s commitment to quality and excellence can be a part of the James Beard Foundation’s mission to celebrate, nurture, and honor America’s diverse culinary heritage.