You are here: Home / Thermometer / Is One Calibration Point Enough?
Author: Randy Owen

While this video is educational, it is misleading since a single point calibration at 0°C does not help if you are using your thermometer to measure any temperature other than 0°C. A minimum of three calibration points are necessary to prove linearity and accuracy.

We partially agree. While it is true that the most definitive test of a thermometer’s calibration follows a 3-point method, the use of a properly made ice bath is a widely used test in the food industries and is recommended by the USDA and other agencies. Nevertheless, we believe that it is frequently done too hastily or without proper technique. We also believe that it can be the single most important test temperature and the most accurately reproduced without specialized equipment. And, we think it is important to spread the word on the proper preparation of an ice bath.

Most home users and most commercial food service users do not have the means to conduct an accurate test at two other temperatures. There are actually three calibration baths in our NIST-traceable calibration lab (see above). This allows us to do the comprehensive sort of testing that @prototype3a suggests, when required. 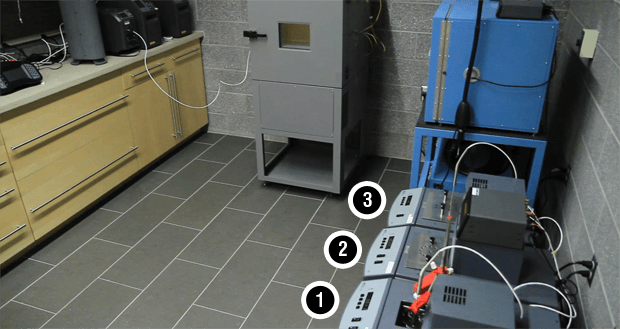 Also, a well designed thermometer circuit manufactured with quality components can be shown to reproduce its performance in a repeated fashion across its range. An ice bath test can be used to show that the calibration is still stable and is within the specified performance of the thermometer. This is very true of the Super-Fast® Thermapen®. Anyone could easily verify this in a standards lab such as ours or any other NIST-traceable facility.

It is worth adding that it is common practice within the temperature standards, or calibration, industry to prove the continued stability of high precision standards or reference thermometers by the use of a proper ice bath test or a similar test done with the higher accuracy of the Water Triple Point Cell—an apparatus that we also frequently use at ThermoWorks. A standards thermometer is regularly tested at 0.01C to establish that its own calibration has not drifted and that the instrument is still serviceable as a calibration reference itself.

Further reading on this subject can be found in: Traceable Temperatures: An Introduction to Temperature Measurement and Calibration by J.V.Nicholas and D.R.White (Wiley).