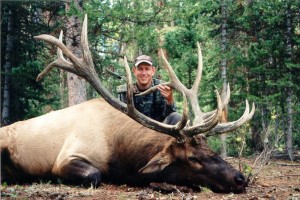 Fall means more than colorful leaves, shorter days and cooler temperatures. For many outdoor enthusiasts, it also marks the beginning of hunting season. A chance to “grocery shop” the way Mother Nature intended and bag the one that got away last year.

While every good sportsman knows it’s important to review gun safety before going on the hunt, we think it’s also wise for a quick food safety refresher. Improper handling of wild game, or any raw proteins for that matter, can lead to unpleasant and sometimes deadly foodborne illness.

Here are a few things to consider before you get locked and loaded:

According to the folks at Colorado State University, wild game is likely to carry bacteria such as E. coli and Salmonella, as well as a slew of parasites, which can be passed on to humans through contact or consumption. Once you’ve bagged your trophy, it’s a race against the clock as bacteria go to work on the warm carcass. 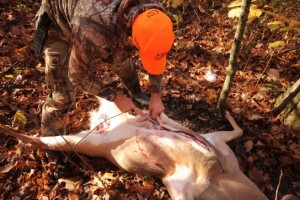 Wild game and food safety expert, Luann Boyer, says that one of the most important and often disregarded food safety rules is chilling the animal quickly after the kill. Chilling wild game to less than 40°F as quickly as possible will slow the growth of bacteria and keep the meat from spoiling.

Boyer suggests that gutting alone may not be sufficient for cooling the carcass because animal hides retain heat and slow the cooling process. Instead, she suggests packing the chest and abdominal cavities with ice packs or plastic bags filled with snow, then tie the cavity shut with string.

Hunters should also consider packing an instant-read thermometer to help track the cooling process following the kill. A Super-Fast® Thermapen® would allow you to quickly spot check the animal as it’s field dressed. Remember, bacteria in the danger zone (41-135°F), will begin to double every 20 minutes. Hazardous analysis and critical control point (HACCP) recording suggests the internal temperature of the carcass needs to reach 70°F within 2 hours and below 40°F within 4 hours of the kill.

Important: Before you probe the raw flesh of the carcass, ensure that the probe tip is clean and sanitary. Driving an unsanitary probe into the meat can introduce biological and physical contaminants. Using a probe wipe prior to inserting the probe is a quick and easy way make sure you’re protected.

It’s also a good idea to wipe the surface of the meat clean before you insert an instant-read thermometer. Surface contaminants can be driven deep into the muscle tissue and cause problems if you don’t intend to cook that particular cut to 165°F. To avoid this problem, only probe those cuts that you intend to use for sausage, or grind up for burgers. 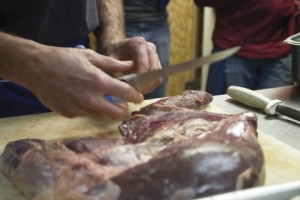 Once the animal’s internal temperature has been stabilized (below 40°F), you can start the butchering process. Butcher one body part at a time while holding the rest of the carcass below 40°F. Work swiftly and safely using gloves and sanitized tools. A fridge thermometer will come in handy as you transfer butchered cuts from the field to the ice chest. Models like the RT615 can be left inside the cooler to monitor temperature, or come equipped with a leave-in probe, like the RT801, so the meter can sit outside of the cooler while it monitors the temp. This will eliminate temperature loss from opening and closing the lid.

Back at home, wild game should be aged at 34-37°F and, according to Cattleman’s Beef Association, at a relative humidity of 80% for no more than 14 days. However, animals with little or no fat covering, may dry out if left to age for too long. Boyer recommends aging average-sized animals, like an antelope and white tail deer in as little as two to three days. The RT817E, with a relative humidity range of 20-99%, proves itself useful in monitoring humidity while your meat ages.

Just as with any frozen, raw protein, it’s recommended that it be thawed in the refrigerator and eaten within two days. Most game will keep safely for up to five days at temperatures at or below 40°F, and up to 12 months in the freezer. 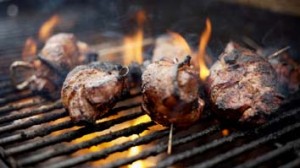 When it’s time to cook your meat, refer to the USDA recommended temperatures for wild game. Minimum internal temperatures of 160°F for wild game and 165°F internal temperature for wild fowl. The same Super-Fast Thermapen that was there when you made the kill will come in handy here as you spot check for doneness. With an accuracy of ±0.7°F, you can get as close to the safe-to-eat standard without drying out your dinner. (If making jerky, the USDA recommends pre-cooking the meat to 160°F prior to dehydrating.)

Don’t ruin an otherwise successful hunt by bringing home a bacteria-ridden carcass that could make you and your family sick. Be mindful of your temperatures at every step in the flow of food and practice safe food handling procedures throughout. Happy hunting!