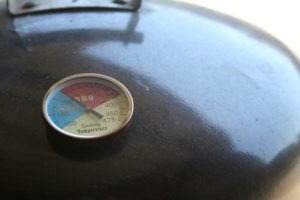 Most BBQ grills and smokers come with a dial thermometer installed in the “dome” or hood of the cooker. Virtually all of these are of the cheapest construction possible from the Far East. None of them are accurate. But, even if you replaced yours with a higher quality and more accurate dial gauge, would it even give you a temperature that was useful?

Look at the stem of your dial thermometer when it’s installed in your cooker. You will see 1” to 2” of stem positioned right near the top of the dome or hood. Temperature is being averaged over the length of that stem and read on the dial. Even if it’s accurate, it will be giving you the temperature in the air space well above the food you are cooking. Heat is rising from the coals beneath and dissipating through the metal or ceramic of your cooker’s top. It is frequently as much as 50°F cooler at the dome thermometer’s location than it is where your food is cooking.

Several variables affect the readings of the dome thermometer. The longer you leave the lid or dome closed, the more closely the dial thermometer will eventually reflect nearly the same temperature at the food’s location. However, every time you open the cooker, equilibration will have to start over and the reading will be wrong for some time.

Furthermore, if you use a deflector plate or drip pan directly under the food, heat currents will be driven up the sides of the cooker into the top, thus producing a greater temperature at the dome thermometer’s location than you would have at the food’s location.

In virtually every recipe, the recommended cooking temperature really is the temperature at which your food should be cooked. If you’re using the dome temperature, you’re likely to have your heat setting anywhere from 35°F to 50°F too high (or too low), leading to the danger of overcooking or drying out your food. Although important in long cooks of larger cuts, this is even more critical when searing and grilling steaks. 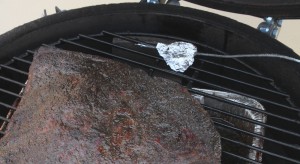 The best alternative to the dome’s dial thermometer is to read the temperature from a probe positioned where the food is located. ThermoWorks recommends using a air probe as close to the food on the grill as practical and about 1” above the grill surface. Some probes may have an integral clip to grasp a grate rod. Other probes could be clamped in place using metal office clips or clips from the local hardware store. Professional BBQ teams seem to prefer a ball of aluminum foil. This ingenious method is totally flexible, cheap and easily repositioned during a cook. Fashion a crumpled ball and tighten it around the stem or cable of the probe in such a way that it protrudes 2 to 3” and is about 1” from the grill surface. To move it during a cook, simply grab it with your tongs and put it where you’d like. When done, the aluminum ball is easily removed from the probe and will not risk damaging the cable. 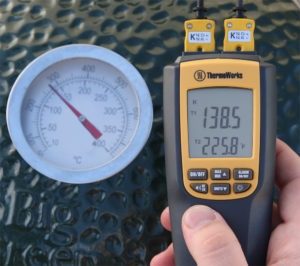 Other alarming thermometers sold for home BBQ or oven cooking employ thermistor probes with a very limited range and limited moisture sealing, not to mention less accuracy. Consumer cooking alarms suffer from a very high rate of probe failure in BBQ use. Due to flames and hot coals, a BBQ cooker will expose your probe’s cable to temperatures well in excess of your target dome or grill temperatures. Even if you’re using a low heat of 250°F, the coals will be much hotter than that. If your cable comes close to those coals, or to a flame, you will burn-out the interior probe insulation and short the probe. BBQ cookers are also very humid environments. Moisture is the other most common reason for probe failure. Professional thermocouples built for the commercial smokehouse industry use higher temperature materials and superior sealing techniques to protect the sensor assembly.

The ThermoWorks ThermaQ® reads two commercial thermocouples. One probe can be used in the food, with an alarm setting. The second probe can be used to read the grill or smoker temperature where the food is located. Over time, you will spend less on probes by using the professional probe solution from the start. Thermocouples also come in a greater variety of probe types that allow many different measurement solutions.

So what should you do with that dial thermometer in your dome? We recommend leaving it in place. If you take it out, visitors will think your BBQ is broken. The dial plugs the hole! You can even replace it with a more expensive after-market dial unit so it looks like you have everything. Just don’t depend on it very much. When you’re cooking, read the temperature next to the food. After the temperature of the food itself, that’s what really matters.