According to the CDC, foods heated during preparation and later cooled for cold storage, or cold consumption are the cause of more foodborne illness outbreaks than any other process in the preparation of food. 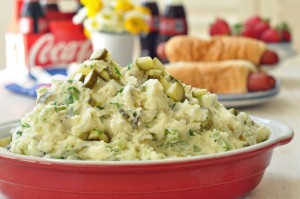 Potato salad, a staple at many backyard gatherings, is the perfect example of a food that is prepared hot and served cold. Improper cooling during preparation can contaminate the batch leaving it teeming with bacteria. The trick to worry-free potato salad is simply a matter of controlling time and temperature.

The temperature “danger zone” encompasses the temperatures between 41°F and 140°F. It’s this temperature gap that provides the most stable environment for bacteria to multiply. The longer food is allowed to sit in the danger zone, the more bacteria grows, and the greater chance that consuming it will lead to foodborne illness.

Many believe mayonnaise (left in the danger zone) is to blame for contaminating their potato salad. In reality, mayo actually acts as a preservative, which protects the potato salad from bacteria. Commercially purchased mayonnaise is made with pasteurized eggs (heated to 140°F) and has a high acid content that actually slows bacteria growth. On the other hand, homemade mayo, which is made with raw eggs, is not safe and should be avoided.

Instead, the real culprits behind many bad batches of potato salad are the eggs and potatoes. Each one is a potentially hazardous food (PHF) that’s loaded with proteins and carbohydrates – everything bacteria needs to thrive. What’s more, these are the two ingredients that are first prepared hot, then cooled and added to the other ingredients. During the cooling phase, when food is improperly cooled, bacteria grows and the food is made dangerous.

The Food and Drug Administration (FDA) has established cooling instructions as part of their Hazardous Analysis and Critical Control Point (HACCP) recording criteria set up for commercial food handlers. Their three step cooling process ensures food is safe for consumption, and is one that can easily be simulated at home. 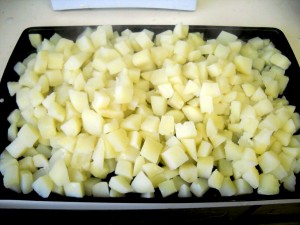 The basic rule to cooling liquid, or solid hot foods quickly is to create as much surface area as possible by reducing the portion size. Larger batches should be divided up into more manageable portions. If you’re making potato salad, consider laying your hot potatoes in one layer over a cookie sheet and letting them cool at room temperature (69-73°F). Whole potatoes should be diced (as directed by recipe) to increase surface area and speed up the cooling process.

Follow the same steps with your hard boiled eggs. Peel immediately after removing them from the heat, dice and spread out onto a tray and allow them to cool.

According to HACCP, from the time you remove your food items from the heat, you only have two hours to pre-cool them to 70°F. Reducing portion size, and increasing surface area will certainly help you get there with plenty of time to spare.

As food cools on the counter it’s important to monitor declining temperatures. This can be done with a leave-in probe thermometer, which will give you a relative indication of overall temperature, followed by routine spot checks with your Super-Fast® Thermapen®. The Thermapen’s reduced tip is perfect for navigating the smaller pieces of egg and potato, and will help you get a better idea of where you are in the cooling process.

Resist the urge to move your food items into cold storage until they’ve dropped to 70°F. Pre-cooling first (before placing in the cooler) will prevent your fridge from warming, potentially spoiling everything else.

With your food items now at 70°F, it’s time to move it into the fridge. Continue holding the food on the tray, to maintain surface area, and place it on its own shelf to maximize air flow. Putting warm food on a shelf surrounded by other items may block air flow, which will extend the cooling process even further.

During this step you have four hours to reduce your food’s temperature to 41°F. Once at 41°F the food will be out of the danger zone and safe from multiplying bacteria. It’s important to note that holding food at 41°F and below won’t kill the bacteria present, it will only slow down (or stop) their growth. 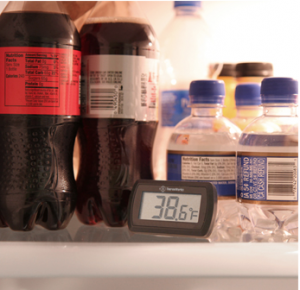 At 41°F you can begin assembling your ingredients. Once combined, store it in the fridge, and hold until you’re ready to eat. To ensure your fridge is doing its job, the FDA recommends setting it to 40°F or below to ward off potentially hazardous bacteria. A hanging fridge thermometer (like the RT615) is the ideal tool to keep tabs on your fridge’s ambient temperature. If you’re packing up for a potluck, or picnic, take special precautions to store your food cold and serve soon after removing it from the cooler.

During service, cold foods should be held between 33°F and 41°F, for no longer than 12 to 24 hours, depending on the food item. Where PHFs are concerned the FDA recommends consuming them as soon as possible; prepared foods tend to quickly lose quality over time. 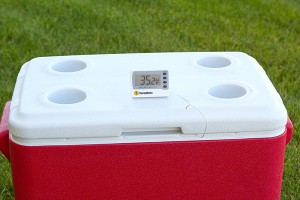 In transit, monitor your cold food items with a battery powered digital alarm thermometer like the RT801. Insert the probe into your cooler, or food item and set the alarm to sound when you’ve breached the temperature danger zone (above 41°F). With the RT801 you can continue to monitor the internal temperature of the food item on the service table to ensure it’s being held at a safe temperature.

In an outdoor setting it’s important to keep your food covered. This will help maintain its temperature, as well as minimize physical contamination. However, if you find that your temperatures are creeping up into the danger zone don’t fret. There is a *two hour window wherein food is safe for consumption before bacteria really ramps up production and starts multiplying to levels that can harm you. Eat fast, and discard after *two hours.

In the off chance you’re serving warm potato salad, be aware that once the warm potatoes and eggs are added to the other ingredients you’ll only have a two hour window to consume the batch before it must be discarded. Take this into consideration if you’re traveling.

*One hour if ambient temperature is over 90°F