Back when I was working at the butcher shop, we sold a fair few pork steaks on any given weekend. It was in the midwest, a place to which I was not native, and I thought that all these people must be taking the steaks home and eating tough, sad meat. An old-timer spoke to me excitedly of them one time, explaining that when he was a child they’d get pork steaks on weekends, “fry them up,” and serve them piping hot to everyone’s great excitement. I believed him, but I assumed he was working off of low expectations. After all, pork steaks are from pork shoulder, and everyone knows you can’t just cook that part of a hog like a steak, right? I just knew they’d be far too tough.

Pork steaks do cook up to be tender and delicious, you just have to cook them the right way, to the right temperature. Here we’ll take a look at what makes pork steaks not only good, but great, and how you can use temperature to make sure that’s the case every time. We’ll be following the process laid down by Jeff Phillips of Smoking-Meat.com for smoking them, but you can apply the thermal principles we discuss here to any method of cooking these delicious cuts. Let’s go.

Is a pork steak the same as a steak, but from pig?

A pork steak is actually nothing like a steak, in that it is not from any of the main “steak muscles” that correlate to those on a steer. Those corresponding cuts are usually called pork chops. Rather, a pork steak is a slice right out of the shoulder (butt) of the hog. They are made by taking a pork butt to the meat bandsaw and cutting slabs, each with a piece of the bone still in it.

Pork steaks are usually cut about 1/2–3/4″ thick, though thicker versions can easily be had. If your local butcher doesn’t have any on offer, you can almost certainly have them whip some up for you in a matter of minutes. The specimens I used for this recipe were on the thick side, about 3/4″ thick, and they came in at about 20 oz. each—a pound and a quarter—which is plenty enough and to spare for my appetite. A few of these cheap cuts will easily feed your family.

As you surely know, pork butt is full of tough connective tissue. 2 That collagen-y goodness needs to go through a full dissolution cycle before the meat turns palatably tender. Before the connective tissue melts, it just isn’t enjoyable. The target temp for a whole pork butt is usually in the 195–203°F (91–95°C) range, but pork steaks are much thinner and have less thermal mass that must absorb heat. Because we don’t have to melt all of the collagen in a whole shoulder when we cook these steaks—and because we don’t need our pork steaks to shred into pulled pork when we eat them—185°F (85°C) will do just nicely as a doneness temperature.

However, that can still take s little time. After a second try, we found that giving the steaks a thermal jumpstart by first going through a sear really helped to get them done faster. We heated the grill, seared the seasoned steaks, and then, once they’d cooked to about 140—155°F (60–68°C) turned the cooker down to finish them.

A smoker running between 225 and 250°F (107 and 121°C) will impart some smoky flavor while gently bringing the steaks the rest of the way up to temp. We used a Smoke X2™ and a Billows™ BBQ fan to control the smoker heat and to monitor the temperature of the steaks as they cooked. Of course, we also used a Thermapen® to verify the steak temps at the end of cooking.

Phillips recommends, as do we, giving the steaks a baste of barbecue sauce towards the end of cooking. When they get up to 185°F (85°C), give them a nice brushing of sauce, preferably something with a good bit of vinegar—but also with some sugar—cook for 10 minutes, flip, baste, and finish for 10 more. The result is pork steaks that are almost like perfect ribs: a bit of bite, a sticky-savory exterior, full of meaty goodness.

Notes on the recipe

To help ensure tenderness, Phillips recommends dry brining your pork steaks for a few hours before cooking. If you don’t have time, you can probably skip that step, but we find it is a good idea. However, because of that extra salting step, you may want to choose a BBQ rub for the seasoning that is lower in salt content.

I’m glad to have tried this recipe out. I’m delighted to know what all those wonderful old-timers at the butcher shop were talking about, and I’m also delighted to have a delicious new recipe up my sleeve. Cooked to 185°F (85°C) in a smoker running at a nice 230°F (110°C) with your Smoke X2 and Thermapen they come out tender, full of flavor, and, quite frankly, gorgeous. And for the price, you can hardly do any better per pound for BBQ pork. I heartily recommend this method to you and hope you give it a try soon. Happy cooking!

Smoked BBQ pork steaks based on the technique by Jeff Phillips at Smoking-Meat.com 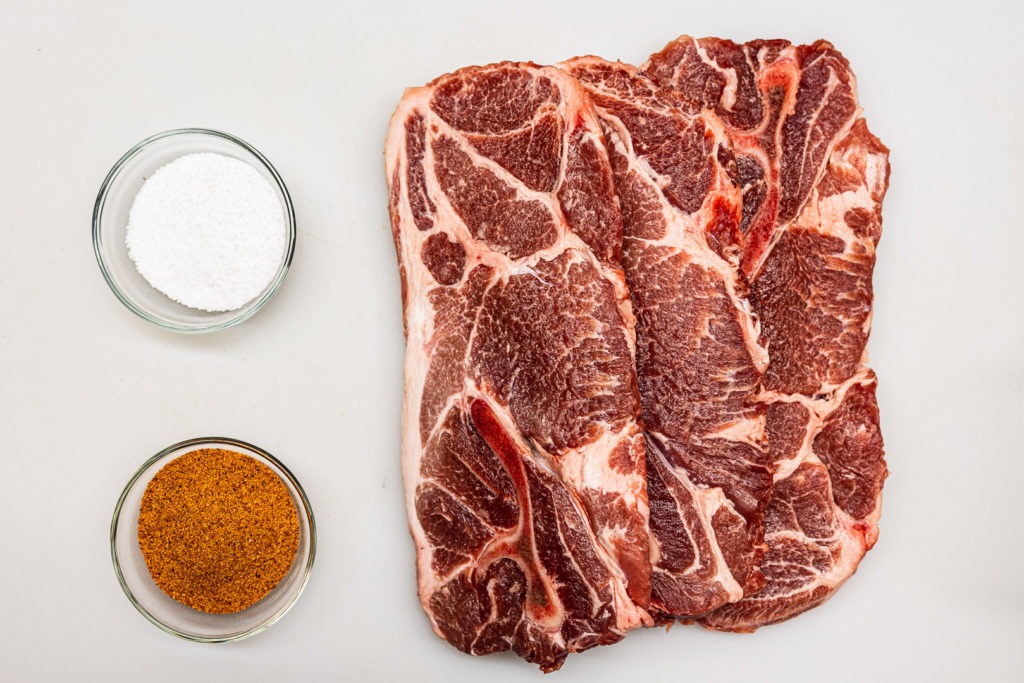 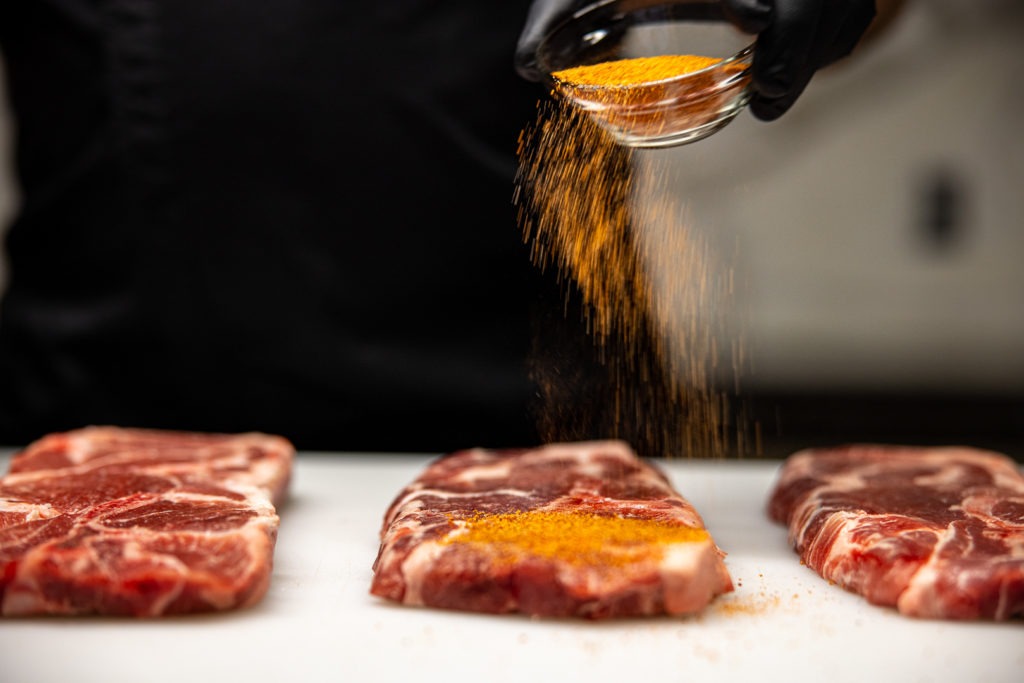 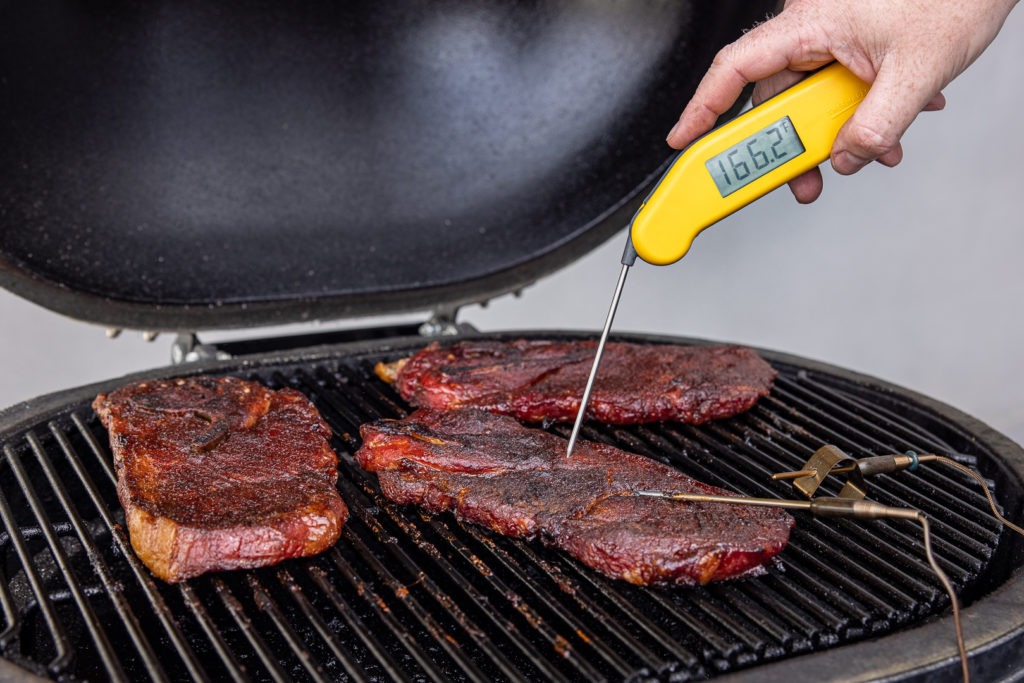