Home » Some BBQ Meats Must be Cooked to Higher Temps
Author: Martin Earl

Every year BBQ teams from all over the world converge on Kansas City, MO and the American Royal for what’s been dubbed the World Series of BBQ. Over 500 pitmasters put their (pork) butts on the line as they gun for the coveted title of World’s Best in categories like chicken, brisket, pork and ribs.

On a recent trip to the American Royal, we watched as pitmasters pushed the boundaries of temperature and took their meat way past the USDA recommended temps for pork, brisket and ribs. When the goal is tender, flavorful BBQ, forget what you think you know about chef recommended temps and aim a little higher.

After talking with several competition teams at the American Royal, here’s what we found out about why traditional BBQ meats need a whole lot more heat.

Because all cuts are not created equal, they can’t be held to the same temperature standards. USDA recommended and chef-recommended temperatures are one thing when you’re talking about sirloins, tenderloins, rib roasts, burgers and pork loins, but what happens when you’re cooking cuts of meat that are crisscrossed with sinew, cartilage and collagen (i.e. “Traditional” BBQ)? Included in this group are ribs, shoulders, and briskets.

While a quick consult of the USDA temperature chart will tell you that these cuts are safe to eat at regular beef and pork temps, these tougher cuts will not be tender or even truly flavorful at these lower temps. The fact is, higher temperatures are needed before traditional BBQ cuts can be considered “ready” to eat. That’s because, higher internal temperatures are required to break down the connective tissue that attaches the dense muscle tissue to the bone. 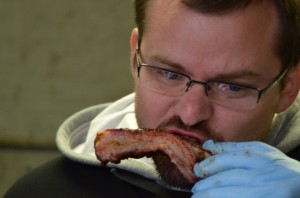 Getting to “ready” requires a lot of time and even more temperature. Connective tissue won’t start breaking down until it’s reached 140°F and even then won’t fully break down until it’s peaked at 200°F.

If the American Royal taught us anything about BBQ it’s that USDA temperatures are merely an indication that food is safe to eat, while calling it “ready” (at a higher temp) indicates that the connective tissue (i.e. collagen) has been sufficiently rendered and the meat is not only palatable, but tender and flavorful.

If you’re doing true BBQ, not just grilling steaks, and you want it to be counted as some of the best in the world, you’re going to have to go way past USDA recommended temps to get to perfect!