Every Southerner I have talked to about it, and I mean every one of them, has told me that the proper accompaniment to a catfish fry (or any other fish fry for that matter) is hush puppies. Now, granted, I haven’t spoken to every catfish-loving person in or from the South, but the fact that so many people from so many parts of the South all agreed on the same thing says something.

And, since we recently published a piece on fried catfish, we thought we may as well help you out with the hush puppies. These simple sides are easy to whip up and well worth the effort, but there are one or two thermal tricks that can help you ace hush puppies from the get-go, even if you’ve never had them before. Let’s dig into it.

What are hush puppies?

First, we should talk about what we’re talking about: hush puppies are cornmeal fritters. They are made with a simple batter that is simply seasoned, usually with a little cayenne pepper and garlic, and studded with chopped onion. In fact, the version we’ll present here—based on a recipe from SeriousEats.com—is so simple, it doesn’t even have any egg in the mix. Styles abound, of course, with regional and sub-regional variations, and you can gussy yours up as much as you want—but there’s really no need to push these tasty bits into any new territory.

This version has a very thick batter, almost more of a dough. They are not scooped and dropped right into the oil, but are rolled into balls, roughly the size of a whole walnut, by hand, then slipped into the hot oil to cook. Other versions may be wetter, and those also have merit, but these are so good and so fast, I doubt I’ll stray much from this recipe in the future.

Why are they called hush puppies?

For an exhaustive and excellent look at the origins of hush puppies and the origin of the name, I recommend reading Robert Moss’s piece on the subject. There are many fanciful, folky stories about how they came to be, but it is almost certain that it had nothing to do with quieting dogs down while frying fish. In truth, it is likely that the term employed “puppies” as a metaphor for a growling stomach. The dish itself seems first to have been served in South Carolina under the name “red horse bread.”

But a rose by any other name would be just as tasty next to some fried fish and slaw, right? The important thing is really what they are, and they are delicious.

Fried as they are, hush puppies can easily fall into the cooking-so-fast-the-outside-burns-before-the-inside-cooks or the cooking-so-slow-they-become-soggy-with-oil traps. To prevent that, we want to cook them at a respectable 375°F (191°C). Use your ChefAlarm® to set a high-temp alarm at that temperature and a low-temp alarm at 350°F (177°C). This will help you keep the hush puppies frying in the correct temperature window. Use a pot clip to attach the probe to the side of your frying pot, and take the guesswork out of the equation. (After all, batter can sizzle when added to many temperatures of oil, not just the one we want.)

Did you know that hush puppies have a doneness temperature? They do. While they may not have any meat in them, the flour itself needs to be cooked before being eaten. Every year there are flour recalls because of contaminated flour. Any food with flour in it needs to be cooked well enough to kill any of that latent bacteria.

The version we present here needs to get up to 165°F (74°C) to make the flour and cornmeal safe to eat. If you are making a wetter, thinner-battered version, especially one with eggs in it, you’d want to cook them up to 200°F (93°C) for textural reasons.

Use a fast and accurate thermometer like Thermapen® ONE to check your hush puppies as they come out of the oil. After all, exterior color is not an indication of internal doneness!

Whether you’re having a fish fry, a BBQ feast, or just a deep-fry night, you need to give hush puppies a try. Give them a dipping sauce of your choice (cocktail sauce is common, as is tartar sauce, but something as simple as a spicy mayo is great) and they’ll garner as much attention and praise as any main you put them next to. And if you remember those critical temperatures, they’ll be even better. Give them a try this weekend!

Hush puppies, adapted from a recipe at SeriousEats.com 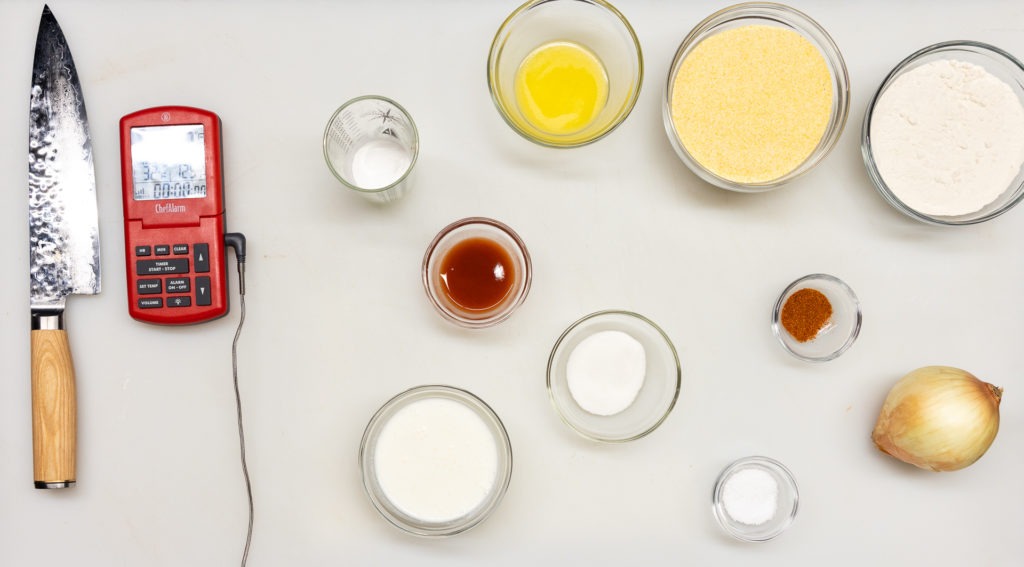