You are here: Home / Bread / Toad in the Hole Recipe and Temperature Tips
Jump to Recipe
Author: Martin Earl

Let us say that it is winter. And let us also say that you want something, hearty, warm, and comforting to eat. Let us further suppose that you have little patience for any difficulty in the kitchen tonight but still want maximum tastiness. What is one to do in such a hypothetical situation? One is to make toad in the hole.

Toad in the hole is an exceptionally easy dish that over-delivers on both impressiveness and deliciousness, and we have a tremendous recipe for it—adapted from an excellent source at Simply Recipes—along with the temperature tips you need to get this dish right. Because, though this dish is simple in both ingredients and method, it is essential that you nail the temperatures to make it the very best it can be. Keep reading, we’ll explain everything.

What is toad in the hole?

First, let us define our terms, yes? Toad in the hole is a dish of sausages cooked in an aerated egg batter. It is, in essence, a Dutch Baby/German Pancake/Yorkshire Pudding with sausages cooked inside of it. There are various stories about how the dish got its name, but a likely one is that it was originally made with small pieces of meats or even sausages that were cut in half and placed on end so that just a small bit of the meat wat poking up out of the egg base, much like a toad picking its head out of a hole. (This is, in a way, not very different from the English stargazer pie, made of whole fish with their heads poking up through the crust of the pie, looking up toward the starts.)

You can use whatever kind of sausage you like, though the traditional version is made with English bangers—simple sausages that are made with grains or breadcrumb in addition to the meat and seasonings. Bratwursts work well, as would some simple garlic sausages. If you can get bangers, give them a go.

Now, I fully expect people to jump into the comments talking about the toad in the hole that their mothers or uncles or grandfathers made for them that was a piece of pan-fried toast with an egg cooked inside a hole cut in the bread. This toast-with-a-hole dish shares the name, but was named well after the dish of which we are speaking here. It is a fine dish, but the English toad in the hole goes back much further and, is, in my opinion, much tastier. After all, it has sausage in it!

Toad in the hole temperatures

A properly made toad in the hole will have nicely-browned sausages that are juicy inside and are nestled in an egg base that is well puffed and nicely browned on the edges. This presents us with two thermal situations we need to be aware of: properly cooking the sausage and getting the egg poofed. Let’s look at the egg first.

Yorkshire pudding is a wonder of the kitchen. Flour, eggs, and milk combine to become a light and airy, hugely inflated pillow of deliciousness. There is no chemical leavening. the added volume comes from the denaturing of the eggs themselves (think of how much fluffier a scrambled egg is than a raw one), and from the creation of steam. To get that lift, we need a hot oven and a hot pan.

Maximum egg-lift is obtained by using a metal pan and preheating your oven, with the pan in it, to 425°F (218°C). Having a ripping-hot pan to our your egg mixture into will jumpstart the egg cooking, creating a light, fluffy layer almost instantly and giving you those delicious crusty edges. The hot oven continues to pump the heat into the eggs creating the steam-lift we’re looking for and then cooking the egg proteins and flour starches in place.

That temperature advice is good for any kind of Yorkshire pudding/dutch baby dish. So much for the eggs.

Sausage temps for toad in the hole

Sausages require the other critical temperatures for cooking toad in the hole. To get sausage that is safe to eat, it must be cooked to 160°F (71°C), so you’ll need to check the doneness with your Thermapen® ONE before you remove your dish from the oven.

But how far should you cook them before you put them in the oven? They’re going into a 425°F (218°C) oven for about 20 minutes, how hot do they need to get in the browning process before they go in? We found our sausages increased in temperature by about 55°F (31°C) while in the oven, so cooking them to about 105°F (41°C) in a skillet before putting them into the hot oven should give you perfectly cooked results. Again, use your Thermapen ONE to check the temps of the sausages as they brown in the pan to know when to transfer them to the oven to cook the dish together.

A note on toad in the hole assembly

To put everything together properly, you need hot, freshly browned sausages, a hot pan, and the egg batter all ready to go at the same time. You want the sausages to go from the frying pan right into the baking dish, then the egg to hit the pan, and for the whole thing to go right in the oven. Any delay could affect the outcome, so be ready!

Also, one thing we noticed when making this dish was that if you crowd the sausages together, you end up with a more dense egg base between them. Now, that texture—much like a well-set, thick custard—was very nice in a way, but if you want it to be airier throughout, I’d recommend giving your sausages a little more space.

For a dinner that is more than hypothetically delicious, give this British treat a try. You’ll find it not only rich and filling, but deeply satisfying on an emotional level that will warm you more than just physically. And by following our temperature advice, you can be sure that everything will turn out perfectly even your first time making it. Give it a shot, maybe even this week, and I’m sure you’ll love it. Happy cooking!

Toad in the hole, adapted from Simply Recipes 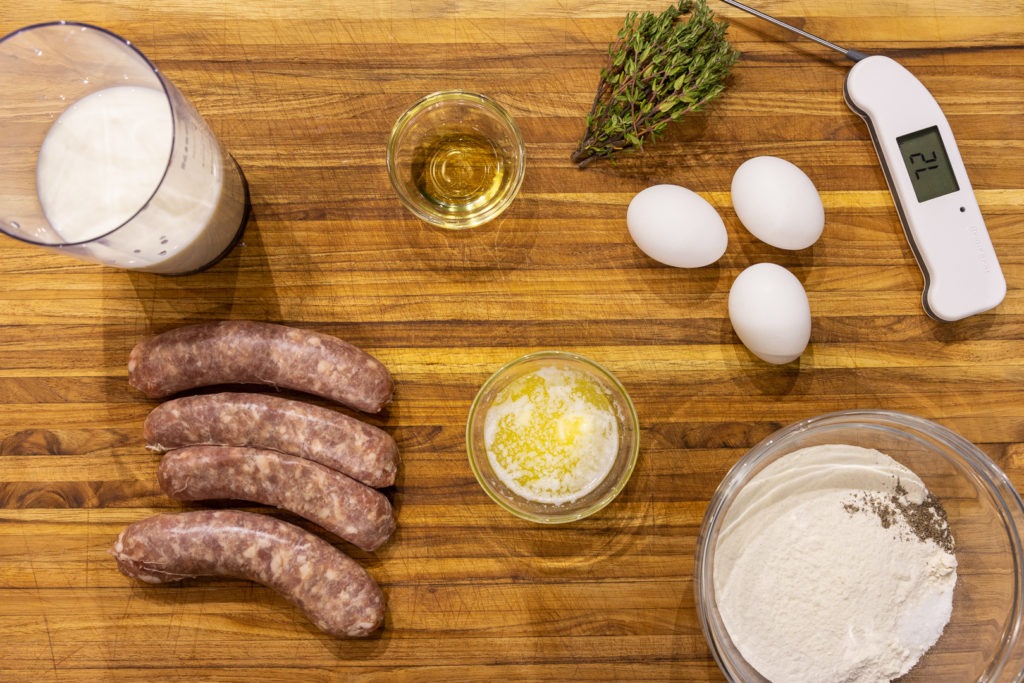 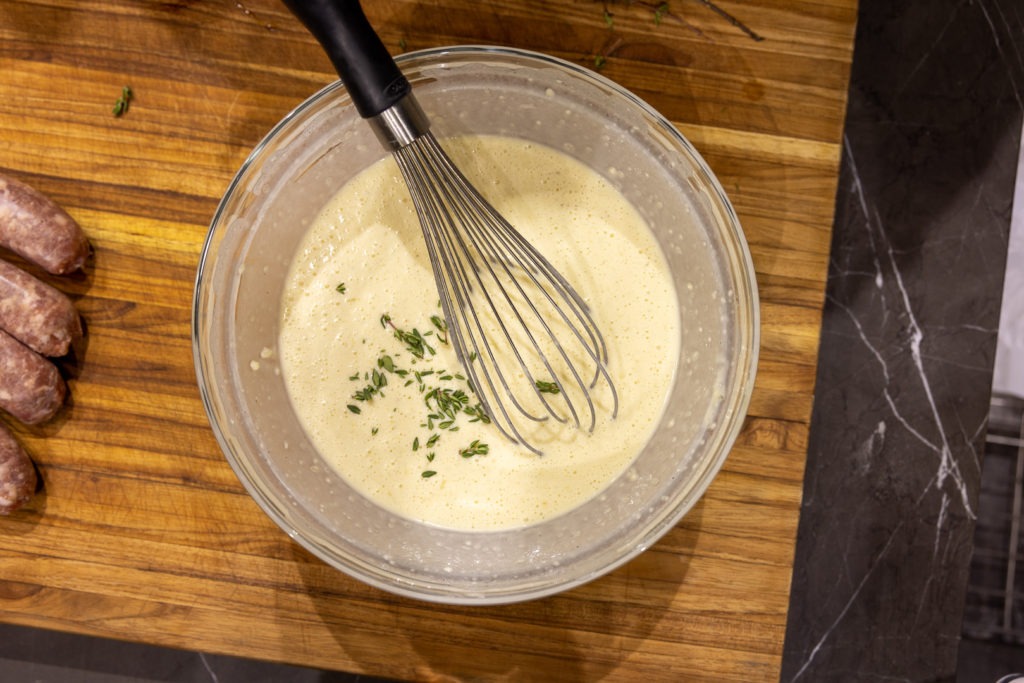 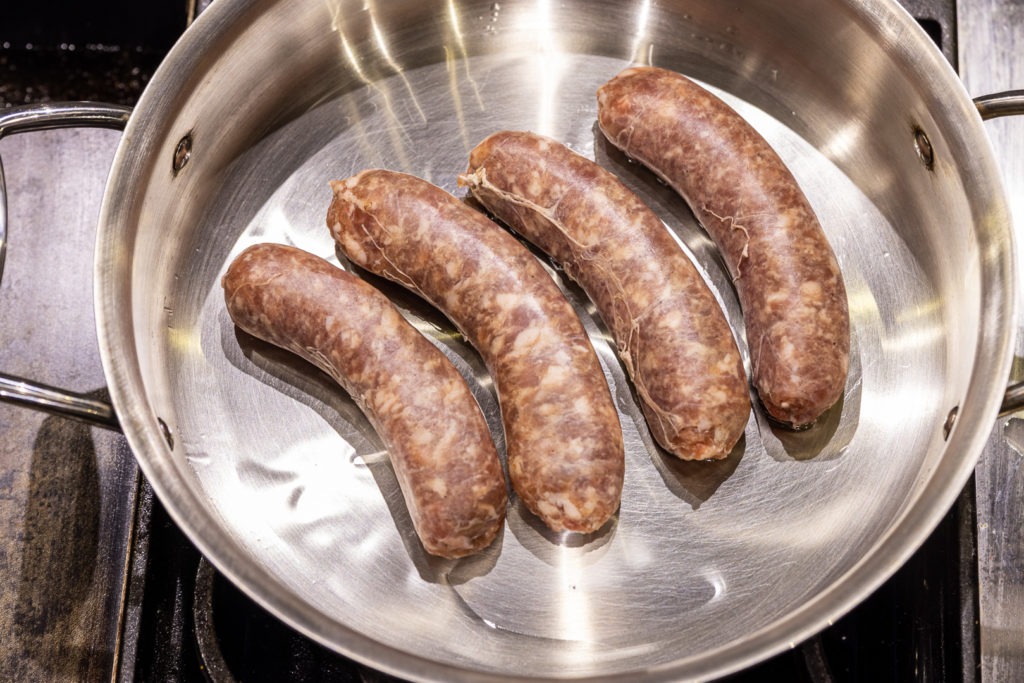 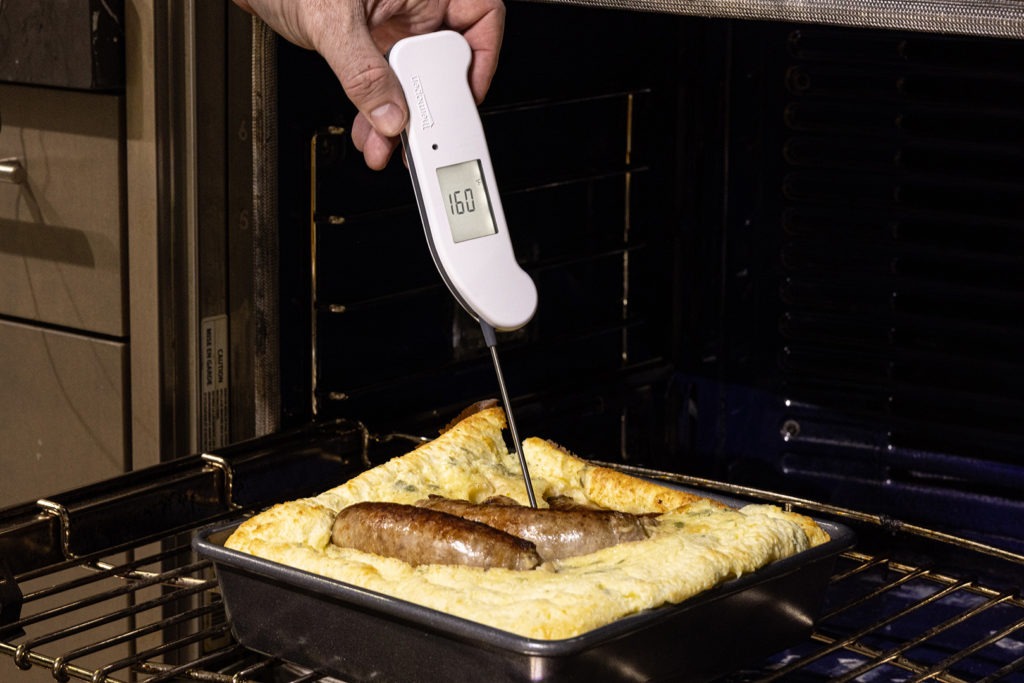 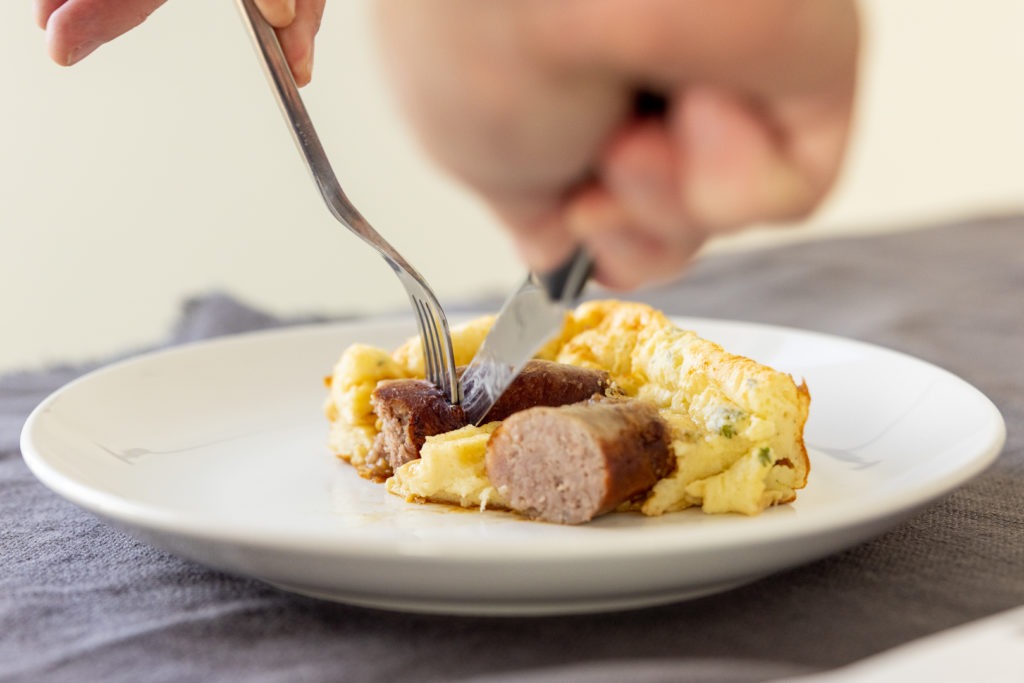 Keywords: Toad in the hole