Boiled eggs are one of the best sources for cheap, easy, delicious protein in your diet, and a good boiled egg is a great snack. But eggs are more complex than their simple appearance suggests. Different proteins make up this two-part ingredient, and the yolk and white set at different temperatures. The problem with hard boiled eggs is getting the right texture rather than rubbery whites and crumbly yolks—not to mention being able to peel them easily. Just a few tweaks to your current egg-boiling technique can yield the eggsact results you’re looking for.

The lore of eggs is perhaps greater than that of any other food item, and more than one chef has gone on record judging others based on their ability—or inability—to cook an egg. —Cooking for Geeks, Jeff Potter

Though some people claim that adding salt, vinegar, or baking soda to the water when you boil an egg can affect its final texture, in my testing, I found that the only factors that matter when boiling an egg in its shell are time and temperature. —The Food Lab, Kenji Lopez-Alt

Anatomy of An Egg

Yolks and whites are made up of different proteins that have different molecular structures and behave differently when heat is applied (collectively, their proteins are called albumen).

Egg whites are 88% water, 11% protein, and 1% minerals and carbohydrates. The most abundant protein found in whites is ovalbumin. Ovalbumin molecules are globular and tightly coiled. When heat is applied the coiled proteins unfold and aggregate together (see illustration below). Once the proteins aggregate the egg white becomes firm and opaque. Egg whites begin to thicken at 140°F (60°C) and are fully set and firm at 180°F (82°C).

Egg yolks are composed of 50% water, 34% lipids, and 16% protein. Ovotransferrin is the predominant protein in egg yolks. Egg yolks begin to thicken at 150°F (66°C) and are fully firm at 158°F (70°C). The structure of ovotransferrin molecules is different from ovalbumin.

Egg yolks proteins can be thought of as “spheres within spheres.” The proteins are not folded over on one another, rather, they consist of larger particles that contain many sub-particles. When heated, the particles become firm and stick together (see illustration below). The texture of cooked yolks should be firm but still smooth. Overcooked yolks become grainy and chalky.

Soft boiled eggs are to egg doneness as medium rare steaks are to meat doneness—it’s all about temperature gradients, or the difference in temperature that exists from a food’s exterior to its thermal center. Temperature gradients exist because heat energy transfers from the outside in. A soft-boiled egg has a firm white and a still-runny yolk just like a medium rare steak has a flavorful seared crust with a soft pink/red interior.

A soft boiled egg has a firm white and a still-runny yolk just like a medium rare steak has a flavorful seared crust with a soft pink/red interior.

A hard boiled egg has a firm white and a solid yolk, and can be thought of as a well-done steak where the protein has been fully denatured from edge to edge.

Eggs can be cooked in innumerable ways to suit personal preferences for doneness, but there are times when hard-cooked eggs are the best option:

The challenge with a hard boiled egg is to have a fully cooked yolk without overcooking the white. A common mistake is to overcook boiled eggs just to be sure they’re thoroughly cooked (the same mistake is often made when cooking chicken). Without a well-planned cooking method, the results are unpredictable. Some of the eggs may be perfectly cooked, while the majority are a bit overcooked and difficult to peel.

Which Cooking Method is Best for Hard-Boiled Eggs?

The most traditional method of boiling eggs is to immerse whole eggs in cold water in a pan, bring the water to a boil, and allow it to continue to boil for 10…12…15…sometimes even 20 minutes long. Then remove the pan from the heat. Using this method over and over again usually results in rubbery, chalky eggs that are difficult to peel.

Just a few degrees makes a difference when it comes to the texture of a cooked egg. —Cook’s Science, Cook’s Illustrated

Each method has a specific cooking time. Use a timer like the TimeStick® to wear around your neck so you know exactly how much time is left wherever you are. Or use a timer like the Extra Big And Loud. Its alarm’s volume is adjustable and can be heard in the noisiest of kitchens. 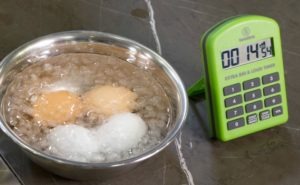 Ice Bath: To immediately stop the cooking process, all of the eggs from each method were placed into ice water after cooking and chilled for 15 minutes. The ice bath is an important step to halt carryover cooking to avoiding overcooking the eggs.

It also helps the boiled eggs to retain their round shape rather than flattening on the wide end. As the temperature of the egg protein increases it expands and flattens the air cell at the wide end of the egg. If the cooked egg cools slowly the air cell reinflates, creating a small dent in the bottom of the egg before it sets completely.

The truly obsessive kitchen nerd’s way to do it is to maintain the water at precisely 170°F so that the yolk comes out perfectly cooked and the white is still tender. —The Food Lab, Kenji Lopez-Alt

Result: A fully-cooked egg that is still soft. The white isn’t a bit rubbery and the yolk is smooth. The only downside is that the shell can still a bit difficult to peel.

Result: The whites were rubbery and the yolk was crumbly. Peeling the eggs was most difficult with this cooking method. For these two reasons, this was our least favorite way to cook whole eggs.

Result: Some of the eggs cracked immediately after being placed into the boiling water, leaking some of the liquid white. The whites were quite rubbery and the yolks were dry and crumbly. However, these eggs were fairly easy to peel. The eggs that cracked were a bit misshapen after peeling.

This method is the favorite of such experts as Jeff Potter, Cook’s Illustrated, Alton Brown, and Kenji Lopez-Alt, just to name a few.

Result: This was our favorite method. The whites were tender and the yolk was smooth—almost fluffy as compared to the other yolks. Our favorite part about these boiled eggs was that each one was incredibly easy to peel.

Some say that boiling your eggs with salt or baking soda is the secret to easy-peeling eggs. But easy-to-peel hard-boiled eggs are all about temperature. The egg protein right beneath the shell needs to quickly set up, separating from the shell’s membrane—a cooking method that involves an initial shock of high heat is the way to go.

When the outermost layer of egg protein’s temperature rises gradually, it will fuse to the membrane right beneath the shell, making peeling difficult and as a result, the cooked egg’s surface will be pitted. If easy peeling is your goal, starting your eggs in cold water is the worst thing you can do.

For the best all-around hard boiled egg cooking method, we agree with experts who suggest steaming as the way to go. The shells slip right off and the eggs are silky smooth and unblemished. When cooked the appropriate amount of time, the texture of both the yolk and white is firm but still tender.

Understanding what’s going on with the food you cook really makes the experience easier, more enjoyable, and the results more delicious! Whether you’re making deviled eggs for a party or coloring Easter eggs with your family, keep these tips in mind and you’ll have the best hard boiled eggs yet.