You are here: Home / Desserts / Time to Make the Doughnuts: 10 Steps to Frying Like a Pro
Author: Martin Earl

Who doesn’t love doughnuts? There isn’t anything like a fresh doughnut that’s still warm. That crispy on the outside, pillowy soft on the inside perfection is fleeting and you can make those splendid doughnuts at home with a couple of secrets, and the right tools for the job. 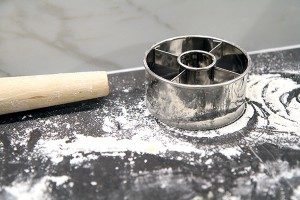 If you haven’t ever tried deep frying at home before, doughnuts are a fun way to try the method for the first time. Get up early tomorrow morning and make a little breakfast treat! 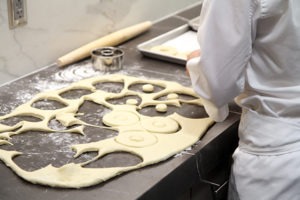 Time to Make the Doughnuts

Starting with an excellent dough recipe is, of course, the first thing you must do to get great results. We prepared our two different batches of dough as instructed in each of the tried and true experts’ recipes, but what happens next requires careful temperature control.  fry accordingly following these critical steps:

1. Use an appropriate frying vessel: You need a pot large enough to safely accommodate a couple of quarts of oil with a few doughnuts. Kenji Lopez-Alt prefers to use a wok for his deep frying, while Modernist cuisine recommends deep frying in a pot large enough to completely submerge the food to be fried in oil. Both America’s Test Kitchen and Alton Brown prefer to use a heavy cast iron, enamel-coated dutch oven for the job. We opted to use a 7.25 quart Le Creuset dutch oven. The dutch oven is very heavy and thick and conducts and retains heat very efficiently. The high sides help prevent splatters during frying.

When deep frying, choose a fat or oil with neutral flavor so the food you’re cooking isn’t overwhelmed by the flavor imparted during cooking. Peanut and safflower oils are examples of neutral oils. You’ll need to use an oil that can withstand high temperatures, too—something with a high “smoke point.”

Thermal Tip: An oil’s smoke point is the temperature at which it is no longer just hot, but the heat-sensitive compounds burn and begin to emit smoke.

At the smoke point, cooking oils and fats will have a bitter, acrid smell and flavor, and should be discarded. Every oil has a different smoke point and a different flavor depending on the enzymes and compounds it contains. Serious Eats has a great article that delves into the details of smoke points of cooking fats with an index of more than twenty different fats. 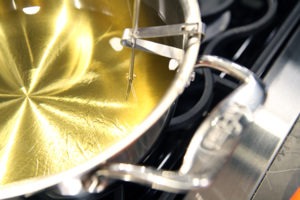 The vegetable shortening yielded a doughnut that was very crisp on the outside. So crisp that some may not like them because they’re too crispy. Another drawback to shortening is that its melting point is higher than body temperature so it can leave a waxy-feeling buildup in your mouth—not very desirable. The doughnuts fried in the vegetable oil weren’t crisp at all and even seemed a bit soggy.

The peanut oil made doughnuts that were moderately crisp and light with a tender mouthfeel—perfect! 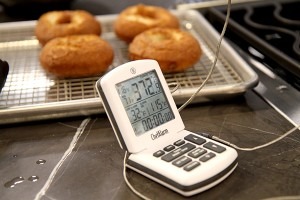 3. Use the right thermometer: Our favorite is the ChefAlarm®, but DOT® is simple and works great too. You can set your alarm thermometer to 375°F (190°C) so you know when your oil is ready to go, and keep track of how far the temperature decreases once you add the doughnuts to the oil (the ChefAlarm Min and Max features work great for this).

A probe clip attaches the probe right to the side of the pan holding it securely in place throughout the doughnut dunking process, keeping it from flopping it around.

5. Fry at the Right Temperature:

As recommended by the Cook’s Illustrated recipe, we found that 375°F (190°C) was the perfect temperature for doughnut frying. At around 350°F (176°C), the doughnuts didn’t seem to cook quickly enough and weren’t very crisp or brown. At about 385°F (196°C), the outside of the doughnuts cooked far too quickly, resulting in doughnuts that were overly brown by the time the inside was done. 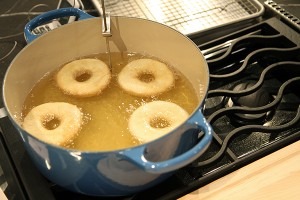 The doughnuts will cool down the oil. It is important to keep an eye on the oil’s temperature with the ChefAlarm so you can see exactly how far the temperature has dipped. Only add enough doughnuts for a 5-10 degree drop in temperature. If the oil cools down too much, the doughnuts won’t fry properly.

The size of pan and amount of oil you’re working with will determine exactly how many doughnuts you can add at a time, but if you keep your eye on the thermometer, you’ll know when you’re pushing up against 365°F (185°C). In our 7.25 quart Le Creuset Dutch Oven about 2/3 filled with oil, 3-4 doughnuts at a time was perfect. 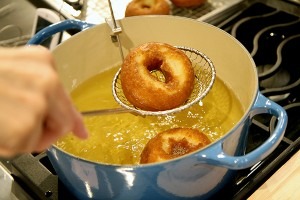 The doughnuts will sink to the bottom of the pan as soon as you drop them in. Free water inside the dough will rapidly convert into steam and escape the dough, and the dough will also expand leaving pockets of air.

Once enough moisture has left the dough, and enough air pockets are formed, the doughnut will rise to the surface of the oil, and once it has browned enough, it’s ready to be turned over. You can use tongs, a chopstick, or a Chinese strainer to flip the doughnuts.

8. Drain on paper towels, not a cooling rack: 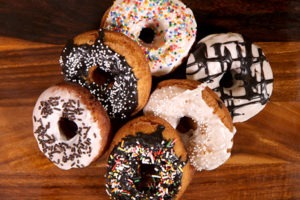 9. Allow time for the oil to reheat:

This step is critical. The oil needs to reach 375°F (190°C) again before frying more doughnuts. If you add four more doughnuts to a pot of oil that is only at 370°F (188°C), it will drop another ten degrees and be too cool for proper frying.

Commercial fryers have about a 10 gallons capacity, and a pound of fries or doughnut dough doesn’t cause the temperature to drop significantly. But when you only have a couple of quarts of oil to work with, a few room temperature pieces of dough will change the core temperature in the pot. So be patient and watch your thermometer!

Just as french fries are better hot than cool, so too are doughnuts. Grab a ChefAlarm and make doughnuts for your friends and family, and you’ll be king or queen for the day. Really—they’re that good!