If you’ve ever had a pie crust recipe fail, you know that the phrase “easy as pie” can be a bit of a misnomer. Flaky, tender pie crust can be harder to achieve than your grandmother made it seem, but with a touch of science and some careful temperature control, you can get your pie crust just right this year!

A beautiful pie (apple, pumpkin, pecan) can be ruined by an off-texture crust. Tough, unyielding crusts are the result of too much gluten development, while flaky crust is the result of proper fat distribution. Let’s look at these two problems in order and see how we can temperature-control our way out of them.

Gluten is a natural result of two wheat proteins (glutenin and gliadin) combining in the presence of water. When we knead bread dough, we do so to bring about good gluten development, which will give us chewy, well-structured bread that is easy to work as a dough. But that same springiness translates into a tough pie crust. (No one wants to have to chew their pie crust!)

To remedy this problem, we can do 4 things:

Choosing a lower-gluten flour is the first trick for getting your pie crust right. Bread flour has a high gluten content, while cake flour has the lowest content. An all-purpose or a pastry flour is best for pie making, as they strike a balance between ease of use and tenderness.

The gluten in the flour is made stronger by kneading (manipulation), so the less we work the dough, the more likely it is that we will end up with a blue-ribbon crust. This is why most recipes say something like “mix just until a ball forms.”

Decreasing water seems hard at first, because how can we make a pie crust that we can roll out without it being wet enough to be workable? Well, we can use a liquid that doesn’t have as much water in it. America’s Test Kitchen has long been a proponent of the vodka pie crust, and the idea really carries some weight. By using a liquid that has an alcohol volume of ~40%, we create a gluten-forming environment that is only 60% as efficient, but retains all of its workability! The test kitchen uses vodka because of its neutral flavor, but any spirit with a high alcohol and a flavor that matches your pie will work fine. Both the flavor and the potency of the alcohol will burn away during cooking.

Because gluten formation is a chemical reaction, its speed is dependent on temperature. Lower the temp, lower the gluten, and increase the tenderness of your crust.

For our pie this year, we used the recipe from America’s Test Kitchen available on SeriousEats.com, which calls for equal parts water and vodka. For the water, we prepared an ice-bath, assuring the water was as cold as possible without freezing—32°F (0°C), which we verified with our Thermapen® Mk4. 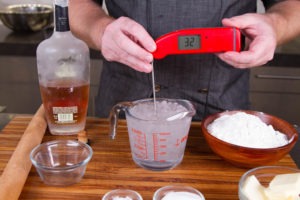 For the vodka (of which we didn’t have a bottle on hand) we substituted spiced rum, which we placed in the freezer for several hours before beginning our crust. The alcohol won’t freeze, but we want it as cold as we can get it.

Liquors with an alcohol content of 40% a.b.v. don’t freeze until -17°F (-27°C), which is far colder than home freezers. But after a couple of hours in a standard freezer, our rum was all the way down at 2°F (-17°C) as verified with our Thermapen Mk4! This cold alcohol combined with our cold water helped keep our crust soft and tender. 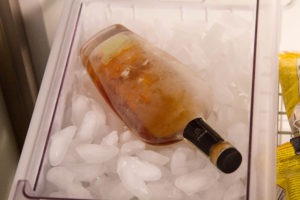 Flaky crust is made by creating tiny sheets of butter or shortening that are coated in flour.

In the oven, sheets of fat, trapped air, and steam from the dough water (and the water in any butter) all help to separate the dough into layers and give it a flaky texture.—Harold McGee, On Food and Cooking, pg 565 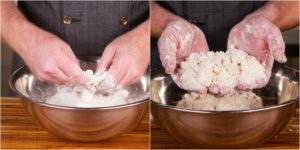 By pressing the butter into sheets coated in flour, or by later rolling out pea-sized pebbles of it, you create the lovely pockets of butter that become layers of flakiness in your crust.

In order for the fat to sheet properly, it has to be at the right temperature. This is why you don’t make a flaky crust by using melted butter or oil. Cutting up your butter or shortening into small pieces and then keeping them in the refrigerator until you are ready for them is a great idea (our fridge kept our butter pieces at a Thermapen-measured temp of 37°F (3°C).  This is another reason using cold water and vodka can help: you aren’t adding heat to the mix that will soften your butter unnecessarily.

If you want to go the extra mile, you can put your flour in the fridge for a few hours before you begin as well. Lower temps mean less gluten and better butter sheets, so do what you can to get those temperatures down!

While we won’t completely cover making a pumpkin pie here (we’ve written about it before), let’s go over the secret to having a pie that doesn’t crack and stays silky-smooth: Temperature. (You didn’t see that coming, did you?) Yes, pumpkin pie is, in essence, a pumpkin custard, and like any custard, it requires careful cooking so as to not scald the eggs.

Egg proteins start to firm up at 140°F (60°C), but don’t set until 160–180°F (71–82°C). To make sure your pie doesn’t crack and get grainy but still sets up without being runny, use a ChefAlarm® to track the temperature rise—this will leave a hole in your pie from the probe, so cover it with whipped cream!—or watch it carefully, checking the temp with a Thermapen as you get close to the “recommended time” from your recipe. The recommended pull temp for pumpkin pie is 175°F (79°C). 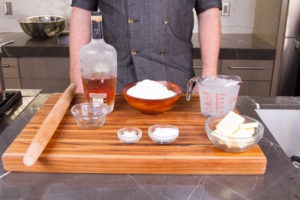 Modified from SeriousEats.com with additional instructions from Epicurious.com

This Thanksgiving, be at the top of your pie game. Use the right tools and keep an eye on your temperatures. Remember: Thermal control is the key to success in almost all aspects of cooking. By keeping your dough cold you can get a tender and flaky crust, and by not overcooking your pie you can be sure of a smooth, delicate finish.