It’s indisputable that people love BBQ chicken, but all that sticky tomato sauce starts to get old after a while. Well, BBQ chicken never had it so good as it does with this Alabama white sauce. Credited to Big Bob Gibson’s BBQ in Decatur, Alabama, back in 1925, this sauce is unlike anything you’ve tasted before and is sure to please even the most discerning BBQ crowd.

This regional sauce’s characteristic flavor comes from the combination of apple cider vinegar, black pepper, and cayenne pepper. But what really gives it that kicky edge is a little hit of prepared horseradish. Oh, and did I mention it’s creamy? It’s actually built on a mayonnaise base, so all the vinegar and horseradish and cayenne gets balanced out very nicely.

So much for the sauce; what about the chicken itself? No amount of tasty sauce will make undercooked chicken safe and only buckets of sauce make dry chicken edible. So how do we get chicken that is both juicy and safe? Let’s take a look.

Here are 3 easy tips you can include to help make your next BBQ chicken foolproof.

Whole chickens are very uneven pieces of meat that do not cook very uniformly. Chicken halves are smaller and more uniform in size, cooking faster and more evenly than the chicken would if left whole. 4

2. Use A Higher Smoking Temperature

Traditionally, the low-and-slow cooking method of BBQ is used for tough cuts of meat that contain high amounts of connective tissue. Meats such as brisket and pork shoulder are usually cooked in a temperature range of about 225-250°F (107-121°C). But chicken breast meat is very lean and tender, so we don’t need those same low temps.

BBQ expert Malcom Reed of HowToBBQRight.com gives a great recommendation for what temperature your chicken should be smoked at:

Bring the smoker to 275-300°F; this higher temperature will render the skin and create bite-through texture.”

For chicken, that slightly higher cooking temperature is perfect: it’s hot enough to render the collagen and fat in the dark meat, but not so hot that the white meat will dry out quickly. To keep an eye on the temps as they climb, we’ll use Smoke X2™ and we’ll verify the internal temps of the chicken with the fast and accurate Thermapen®.

Spritzing meat with liquid (we used apple juice) makes the exterior moist and tacky—perfect to allow the smoke to adhere to the meat. Also, spritzing the surface of the chicken periodically will keep it cooler through evaporative cooling. The spritzing liquid absorbs the thermal energy on the chicken’s exterior, leaving the meat when the moisture evaporates. Keeping the surface of the chicken cool will help prevent having dry, overcooked white meat.

Malcom brings up an important point that applies to both the white and dark meat areas of the chicken. Even though most of the meat is lean and tender, the skin is very fatty tissue. The fat in the skin needs to be fully rendered for the best results in the final texture and eating experience. The higher temp helps with that. But dry-brining the chicken will also help! Rubbing the chicken with salt and spices the night before you cook will draw out excess moisture in the skin, allowing the heat from the smoker to go right to work on the fat rendering without first having to heat up a bunch of skin water.

Also: we brushed the white sauce on the chicken near the end of the cooking process so it has a chance to melt into the surface of the chicken, flavoring deep into the cracks and the pores. Brush with more white sauce after you pull it from your smoker, and serve with additional sauce.

Splitting the chicken into halves, smoking at a higher temperature, and spritzing all work together to make this BBQ chicken flavorful, rich, and incredibly tender and juicy. This smoky and mildly spicy project will be a delicious, simple addition to your backyard BBQ, and you know it’ll turn out great if you keep an eye on your pull temps with high-accuracy thermometers like Smoke X2 and Thermapen. 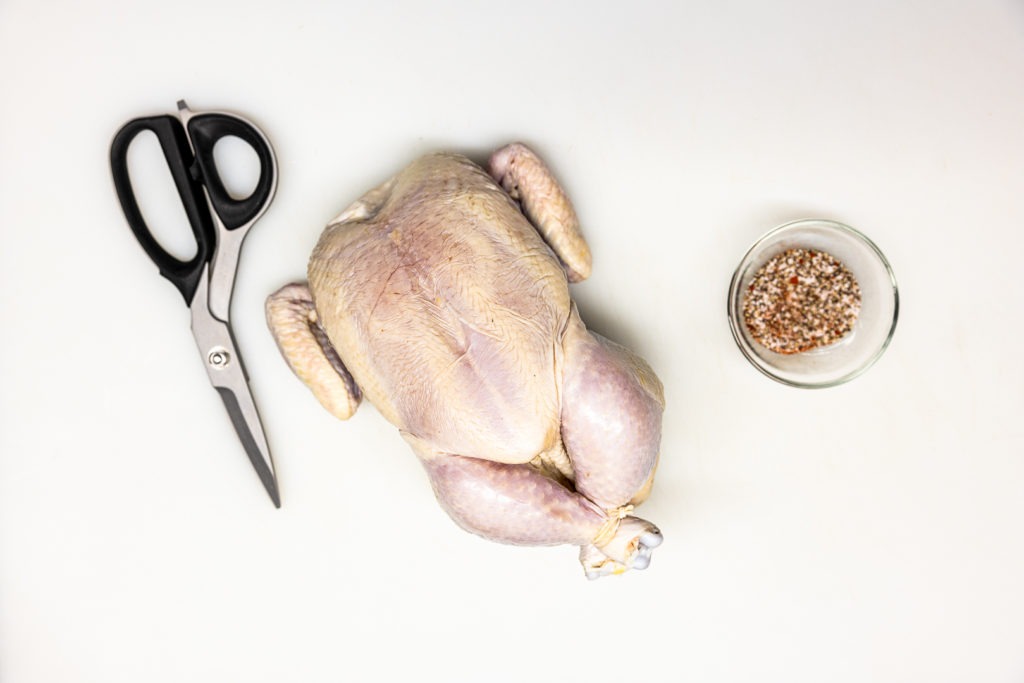 For the Alabama white sauce

Split and dry brine the chicken 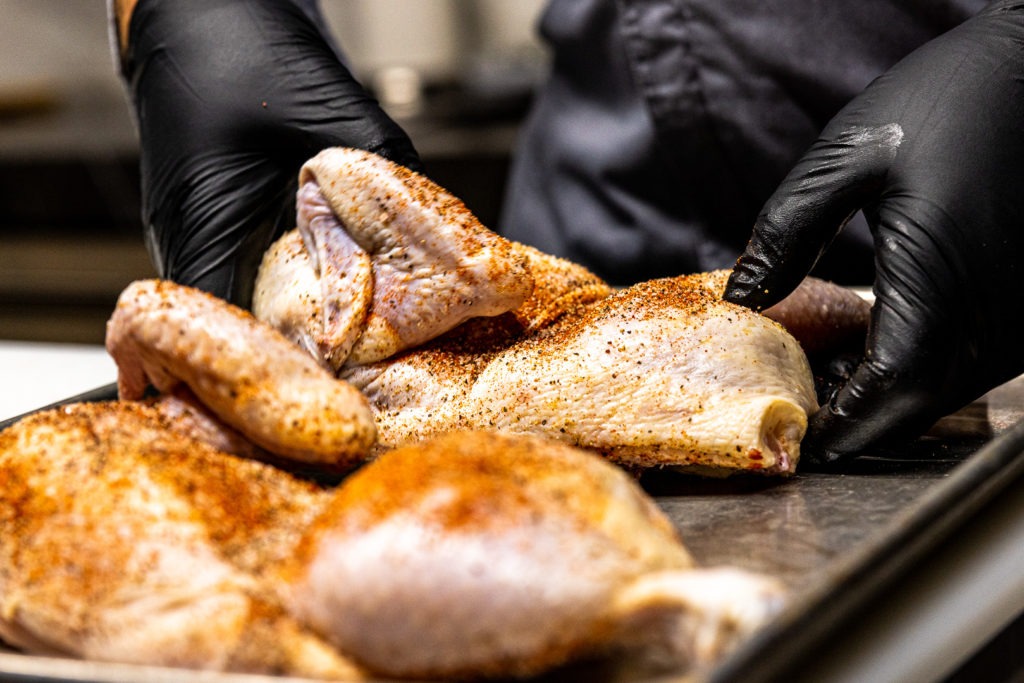 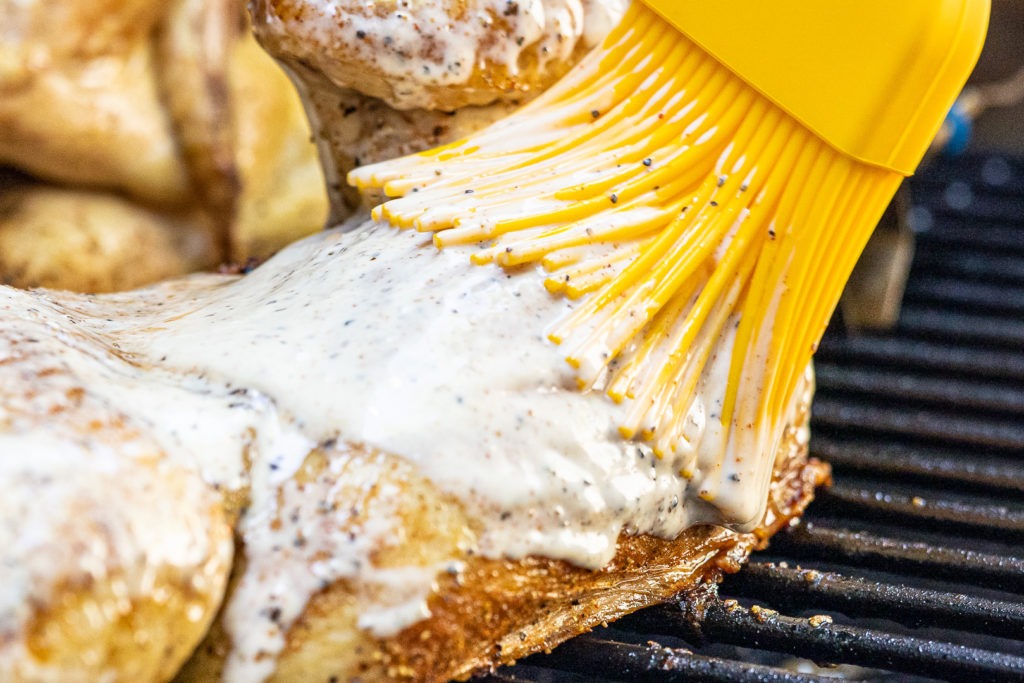 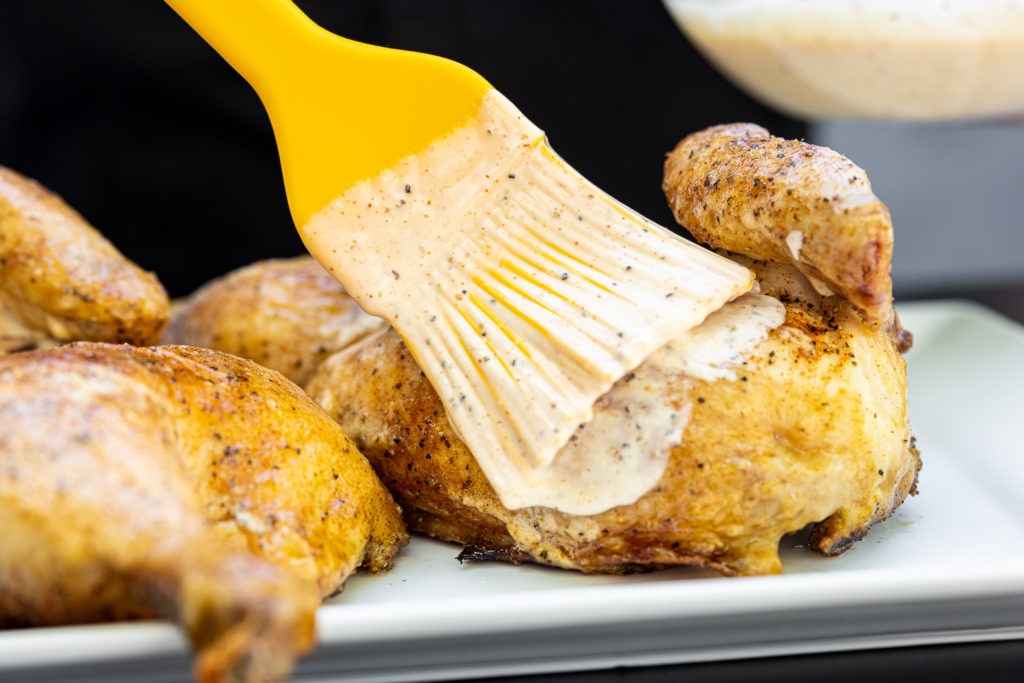