Good cannoli can be hard to find. Unless you live in a city with a substantial Italian population, cannoli might not even be available, let alone good. But that just isn’t acceptable. Everyone should be able to enjoy great cannoli!

Here, we present a recipe for fantastic cannoli with crisp, flavorful shells and beautifully simple, rich cream. Plus, we have some thermal advice on cooking cannoli correctly—you shouldn’t be eyeballing your fry oil temperature. Let’s get into it and find out how to make these pastries.

The wonder of cannoli is the way the crisp, bubbly shell interacts with the smooth, creamy filling. That texture, that feel in the hand, it’s all part of a good cannoli. But so is the taste! Cinnamon is not uncommon in many cannoli recipes, but even more important is wine. Cannoli shells are made with wine as part—or in this case, all—of the liquid.

Originally, wine served to flavor the shells. Now, though, we know that by using a liquid that is part alcohol, we develop less gluten during the mixing process, making it easier to roll the dough out. But even more, the alcohol in the wine cooks out even more quickly than the water does, creating alcohol steam and bubbling that crust more quickly.

So that’s the flavor, but what about the crisp and bubbliness? Well, that takes some thermal thinking.

Crisp shells need to have the water cooked well out of them, and a bubbly texture comes from the creation of steam in the dough. To accomplish both of these feats, we need to roll the dough out thin. Like, 1/16 of an inch thin. Thicker dough rounds will not so much get bubbles on the surface as inflate like a pita, ripping their seam and flying free from the cannoli form. If you don’t roll your dough thin enough, you’ll end up with a delicious, crisp donut-y thing, but you won’t have a cannoli shell.

Creating the little steam bubble is obviously indicative of water being cooked out, but here thinness matters, too. If the dough is too thick, we can end up with a shell that is crisp on the outside, but still moist inside. That may sound great—crispy chewy!—but in the end, it will just lead to a vague-textured shell as the water redistributes through the pastry.

The next thing to think about is the oil temperature. Oil that is too cool will cook the dough in place without bubbling it up. It results in a shell that is crunchy and hard, not crispy and light. Oil that is too hot can burn your shells, but it can also create too much steam too quickly and puff up the shells in a bad way.

We found that oil (most traditional recipes use lard) at about 350°F (177°C) strikes a great balance. Use your ChefAlarm® to track the temperature as you cook, trying to maintain a window within a few degrees of that target temp. Checking oil temps by “dropping in a crumb to see if it sizzles” does not give you an accurate idea of the temperature!

How to make cannoli filling

Cannoli filling is traditionally made of sweetened ricotta. You can find versions that use a custard/pastry cream, and those are plenty tasty, but there is a lightness, a simplicity that borders on purity in a simple, sweet ricotta filling. Many Sicilian recipes call for sheep-milk ricotta, but, shocker, that can be hard to come by in the States.

By all means, if you have access to some fresh sheep milk, make your own ricotta for this! If not, use cow-milk ricotta that has been spiked with a little bit of goat cheese (chevre). It adds just enough zing to wake the flavors without being noticeably goaty.

Once you’ve secured your ricotta, whatever its origin, it’s best to drain it. Give it a stir to break up the structure a bit and plop it into a strainer over a bowl. Leave it for a few hours, or overnight in the fridge, before you strain and sweeten it. And yes, it should be strained. Press it through a sieve or strainer with a silicone spoonula to ensure optimal smoothness.

To sweeten the ricotta, superfine sugar is best. It dissolves more easily and quickly, so you’re less likely to oversweeten. If you want to add a tiny drizzle of honey, that’d be delicious.

To top off the filling, mini chocolate chips are stirred in right before it is put in the shells.

Just because you don’t live near a major urban center with a rich history of Italian-American culture doesn’t mean that you can’t have amazing cannoli. With these temperature tips and this recipe, you’ll make cannoli that will make you feel like you’re sitting on a sunny piazza in Sicily, soaking up the scenery. Make them for your next party, or, even better, for yourself this weekend. You’ll be glad you did, as will anyone lucky enough to get one from you.

Adapted from recipes by Binging with Babish and Bon Appétit.

For garnish: chocolate for melting, chopped pistachios, candied orange peel, whatever else you want 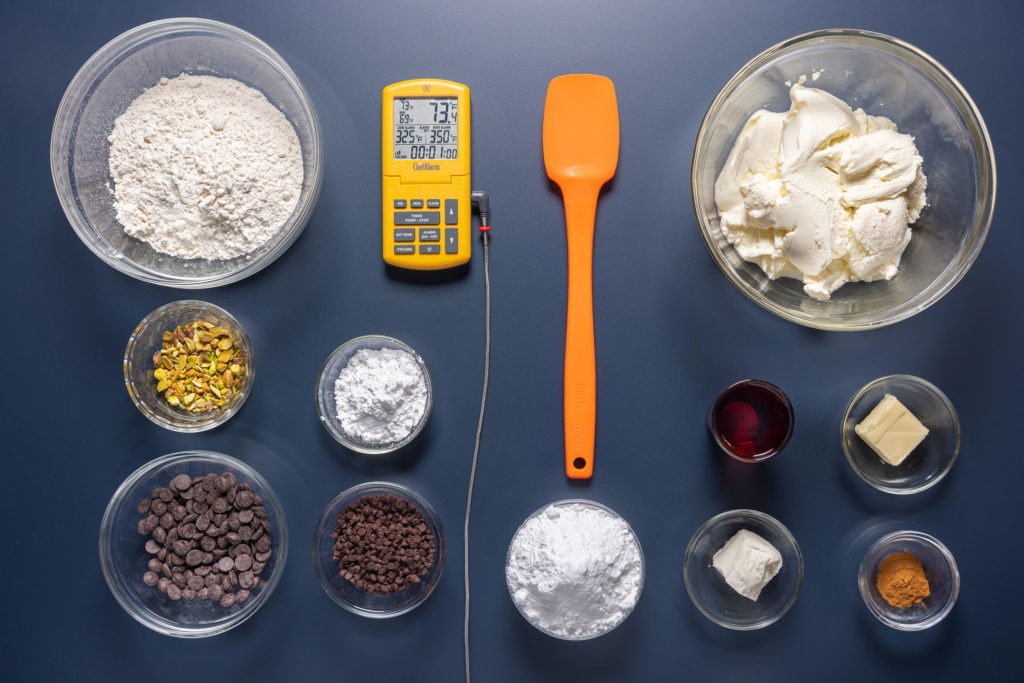 Make the dough for the shells 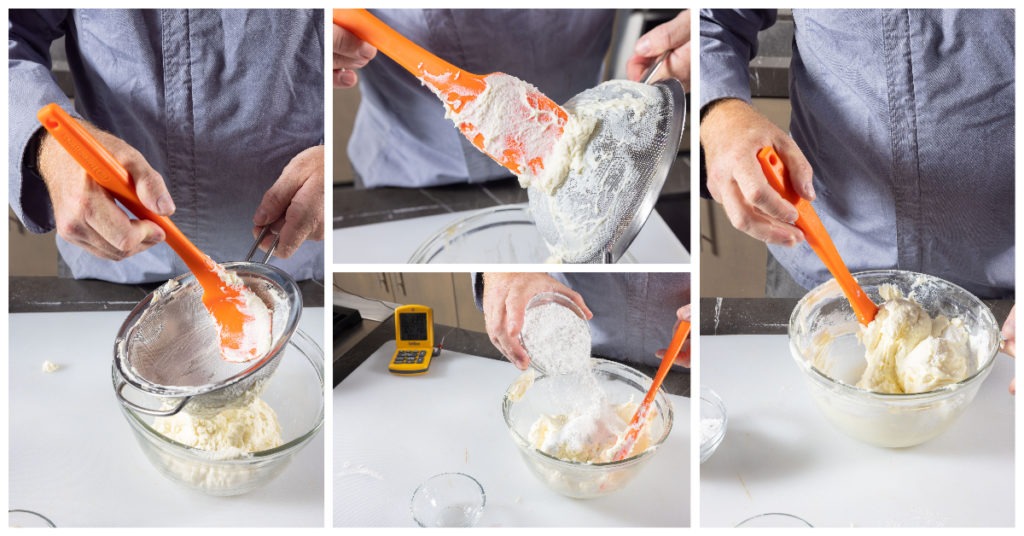 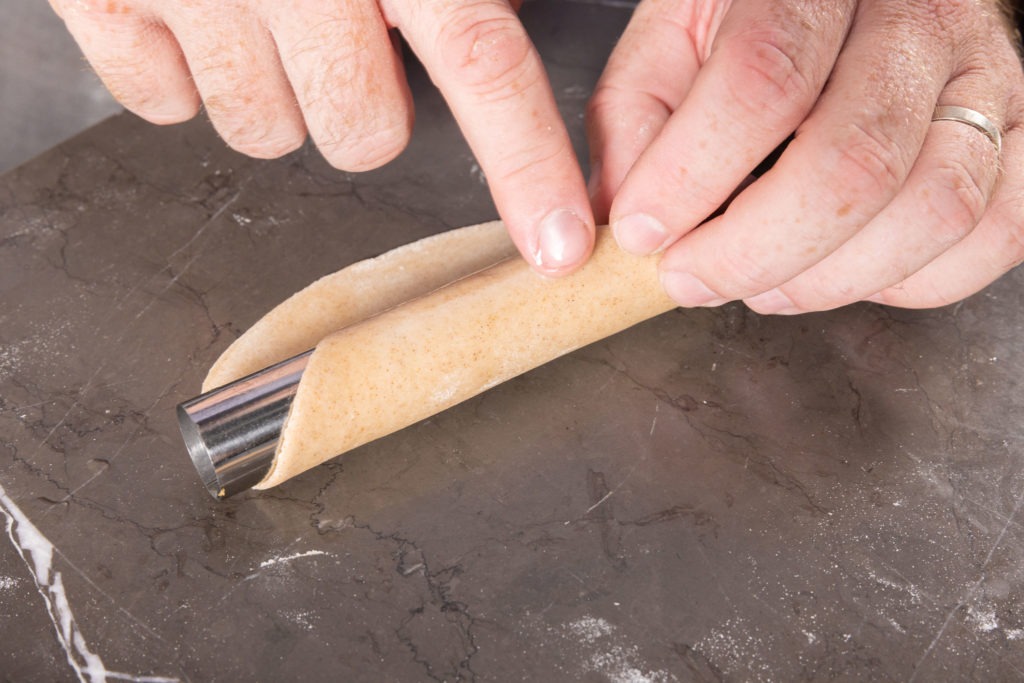 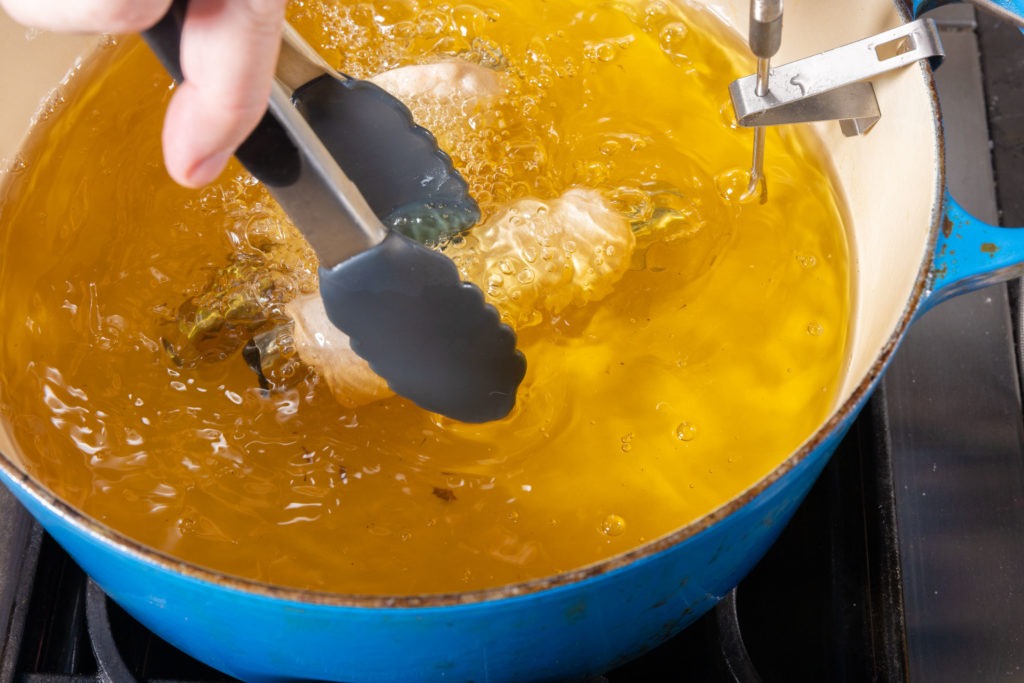 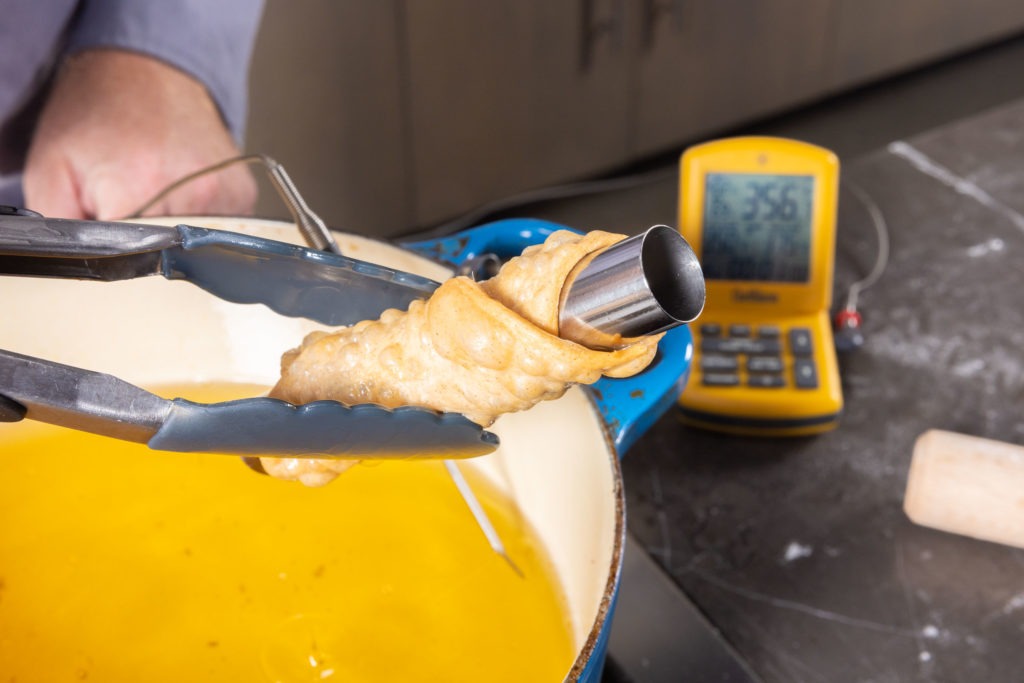 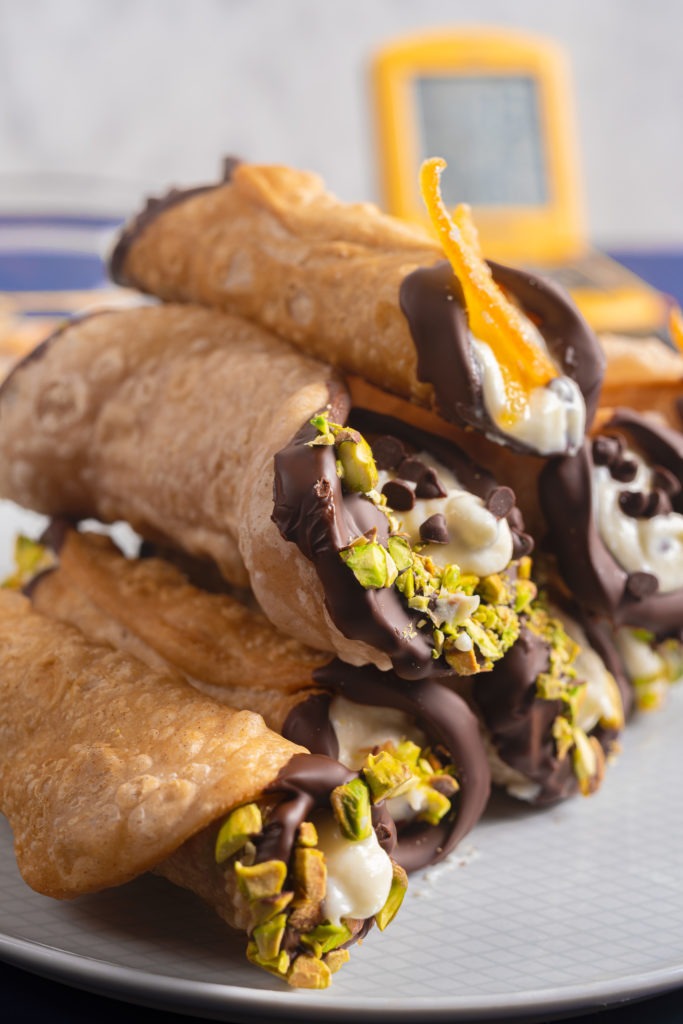 Superfine sugar can be hard to find. If you can’t source it, put a cup of sugar in a good blender and blitz it at high speed for a few seconds.

Stirring the ricotta before draining it will help it drop excess liquid. If you don’t have time to strain the ricotta, you can proceed, you’ll just end up with a less-firm filling.

It is best to eat them as close to their preparation as possible if you want a crisp shell. Refrigerating stuffed cannoli will soften the pastry. You can prepare the shell and the filling in advance by a day and fill right before service.