Let’s make a distinction here real quick. Pizza from Italy and pizza from America are not the same thing. In the same way that the Chinese don’t eat most of what we call Chinese food, so the Italians would look on our pizza with disbelief and derision. And that’s ok! Foods change as they encounter new cultures, new ingredients, new food traditions. 2 Just because Rafaele Esposito didn’t come up with Chicago deep dish or BBQ chicken pizza doesn’t mean they aren’t a valid part of our national cuisine now. Pizza is something we have taken, regionalized, personalized, and Americanized in amazing ways.

Among the myriad styles and variations of pizza in America, it is about time that Detroit-style is finally getting some attention. in the last 10 years or so, word of this style has started to make its way around the country, and for good reason. It’s a unique, hearty style of pizza and ought to be tried by pizza lovers everywhere. Here we’re going to give this regional specialty some of the limelight it deserves, including how to use temperature to get the very best results. We’ll follow King Arthur Baking and J. Kenji López-Alt’s recipes to get us where we want to go. Read on!

What is Detroit-style pizza?

Detroit-style pizza is what one could term a “pan” pizza, as opposed to “hearth” pizza. It was originally—and still is—cooked in a blue-steel tray that was intended for use for holding small parts on the manufacturing lines of the auto plants. The heat-conducting properties of those pans helped the style become a success: as the cheese near the edges drips down into the cracks, it gets crispy and caramelized and toasty, as does the crust itself, which is doused heavily in oil to prevent it from sticking in the pan.

But a Detroit pizza is distinguished by more than just its square-pan shape. It is also distinguished by its toppings, or rather how those toppings are applied—in “reverse” order. Yes, they put pepperoni down first, right on the raw dough, then sprinkle on the brick cheese, then top it with sauce. Heresy! You cry, but no. Innovation is the correct refrain. The sauce on top changes the whole feel and flavor profile of the pizza. This particular recipe uses a homemade sauce that is at once zippy and richly tomato-y, and is very easy to make.

If you were reading that last paragraph closely and you’re not from the Midwest, you may be asking the question “Brick cheese? What’s that?” Take a gander at this:

Brick cheese is one of the main kinds made in the USA and one of the few which can claim an American origin (although possibly modelled on a German cheese called Box). First made in Wisconsin, around the 1870s, it is now manufactured in other states and Canada also.
The name may refer to the brick-like shape and size bestowed on it by the forms in which it is made, or to the actual bricks traditionally used in pressing it.
Brick is a whole-milk cheese with an elastic texture, less firm than Cheddar, with irregular holes or ‘eyes’, and easy to slice.”

The cheese is buttery, sharper than mozz but not as sharp as even a mild cheddar, and it melts like a dream. Plus, because of its high fat content, it is less likely to burn in the oven, so your melted-cheesy goodness will be toasty, not burnt-tasting. By all means, if you can’t find brick cheese, don’t shy away from this pizza! A combination of mild cheddar and low-moisture mozzarella will do. But if you can find brick cheese, I highly recommend it.

Oh, and the cheese is cubed, not shredded.

There are a couple places to think about thermal principles in this pizza. One, of course, is in the preparation of the dough. As we’ve discussed before, yeast activates in its happiest state when it’s awakened by water that is 95–100°F (36–38°C). We temped our water before adding it to our dough to make sure it was going to be pleasing to our yeast.

Then there’s the rising temp, which should be between 85 and 105°F (29 and 41°C). We placed out bowl, covered in plastic wrap, in the path of a heating vent some distance away. Perfect.

And, finally, there’s the doneness temp of the pizza itself. This pie gets a full 12 ounces of cheese on it, plus about a cup and a half of sauce, plus the pepperoni. It’s well-laden, and rather thickly crusted, and well-laden pizza can sometimes end up doughy in the center. The crust of this pizza is a lean-dough bread, and that means a doneness temp between 190 and 210°F (88 and 99°C). A quick check with the Thermapen® before we take the pizza out of the oven will let us know that the bubbly cheese on top is not fooling us into eating an undercooked pizza.

And here there’s one more thermal principle we need to talk about. Detroit-style pizza is cooked in heavy, metal pans, and you’re going to get the best results if you follow suit. Why? Heat transference.

A heavier metal pan conducts the heat very efficiently from the hot 550°F (288°C) oven to the crust and the edge-cheese of the pizza. The heavy addition of olive-oil to the pan combines with the hot metal to crisp—almost to fry—the bottom and sides of the crust and makes frico of the cheese that you purposefully scatter at the edges of the pan. The results are undeniably tasty, and they just won’t be quite the same in a glass pan. A good quality, heavy, nonstick cake pan will do great if you don’t want to shell out for a Detroit-specific pizza pan.

I hope you try this pizza. When we made it there were many skeptical looks, but every one of them was turned into wide eyes and big smiles. How could they not? Sure, it seems strange to have the sauce on top, but it actually plays very well, and with our perfectly-temped (thanks Thermapen!), pillowy, chewy crust, the pie ended up being irresistible. Give it a shot, and you’ll be as glad as ever for innovation in cooking.

Detroit-style pizza, based on the recipes from SeriousEats.com and King Arthur Baking. 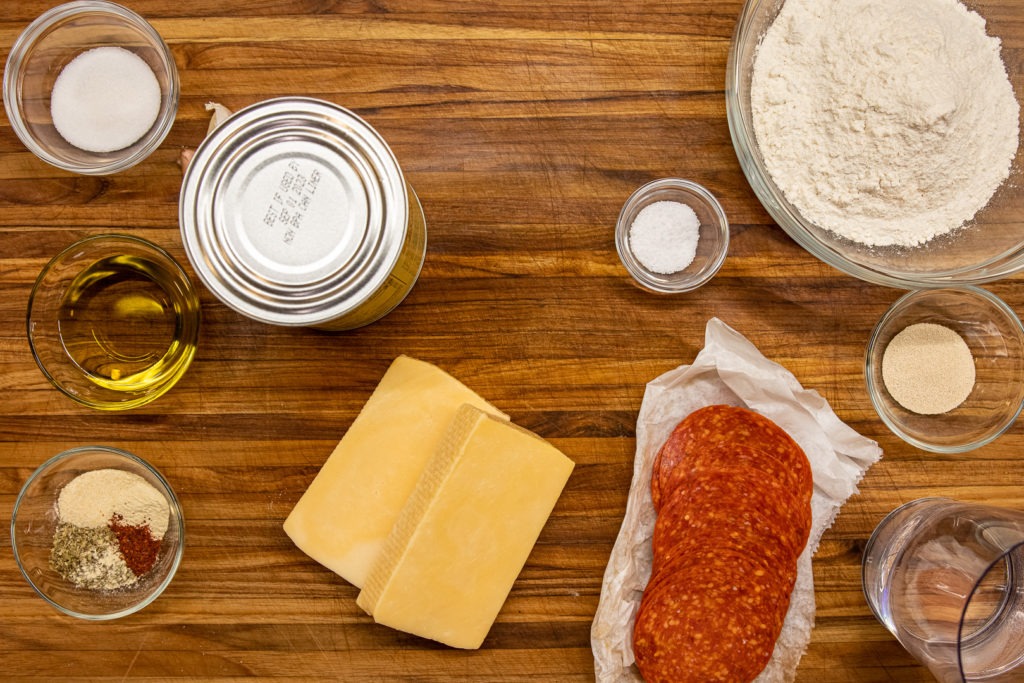 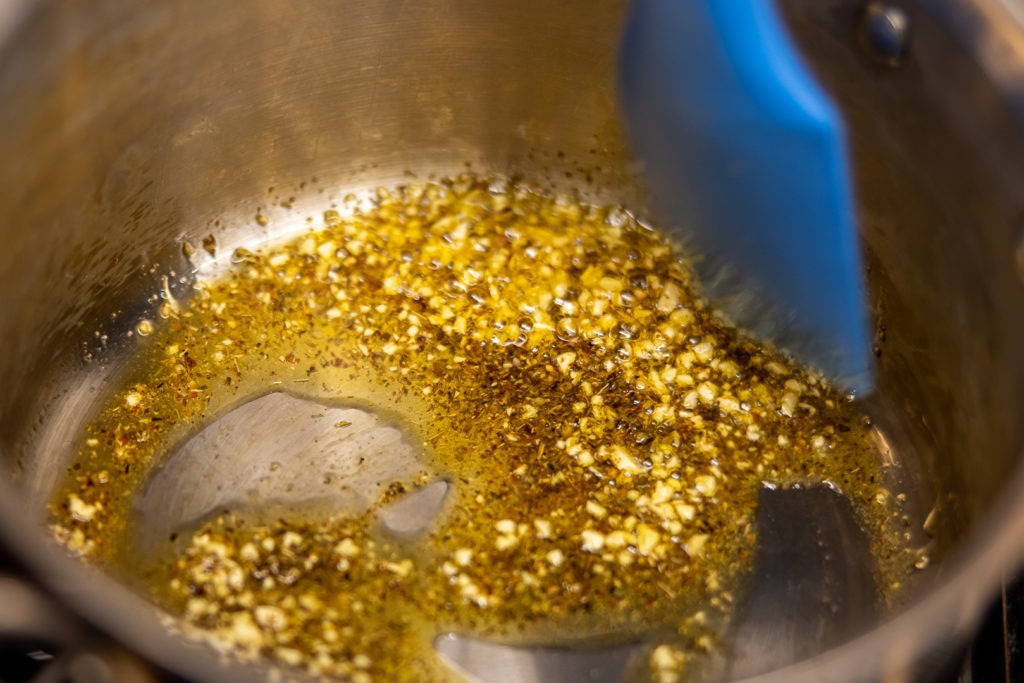 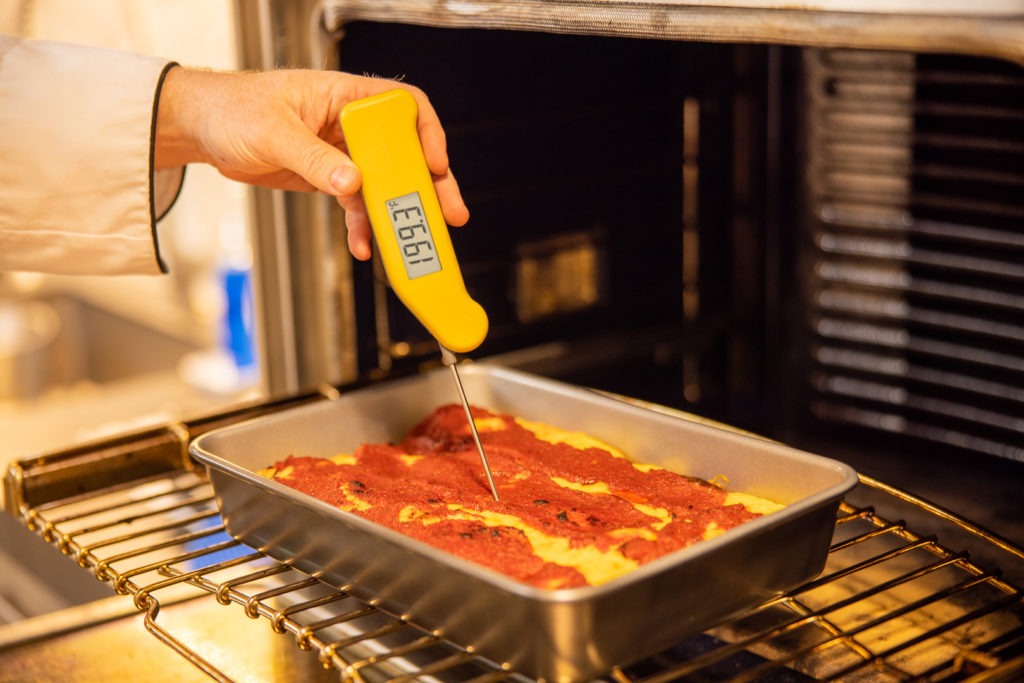 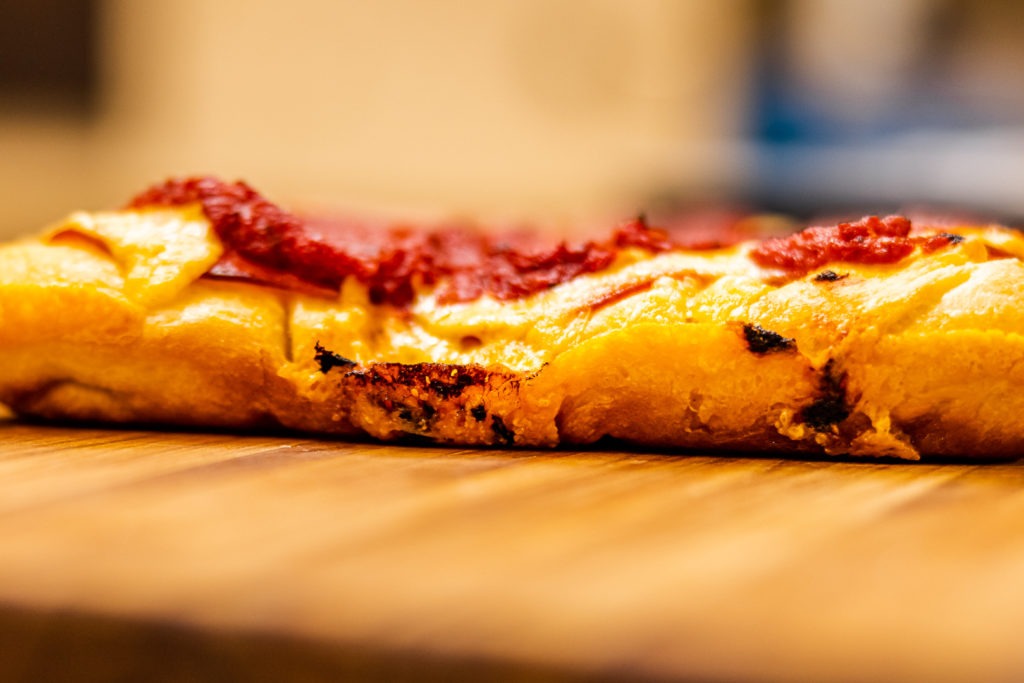