Anytime is a good time for tender, juicy, smoky brisket. We have the thermal tips you need to get it right. So grab a “full-packer” from your butcher, and get smoking!

Brisket is a rite of passage for anyone with a smoker. It’s the ultimate challenge: taking what is arguably the toughest piece of meat in the whole cow, and through the art and craft of low-and-slow smoking, turning it into pure meat candy—that smoky, peppery, caramelized exterior with tender, flavorful, juicy beef inside that is one of the pinnacles of the barbecue experience. 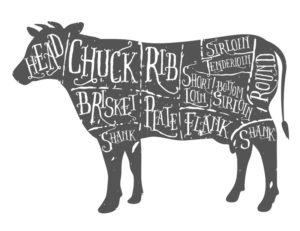 We did a study of the tenderness of forty major muscles of the cow when cooked in the same manner, over direct heat like a steak and the brisket was thirty-ninth in tenderness. But the fact that in Texas barbecue, you’re taking one of the worst pieces of the animal and converting it into one of the best is a miracle itself. —Dr. Jeff Savell as quoted in Franklin Barbecue

We have the critical thermal tips necessary to help you gear up for your first brisket cook of the year! And we also have the right tool: the all-new Smoke™. 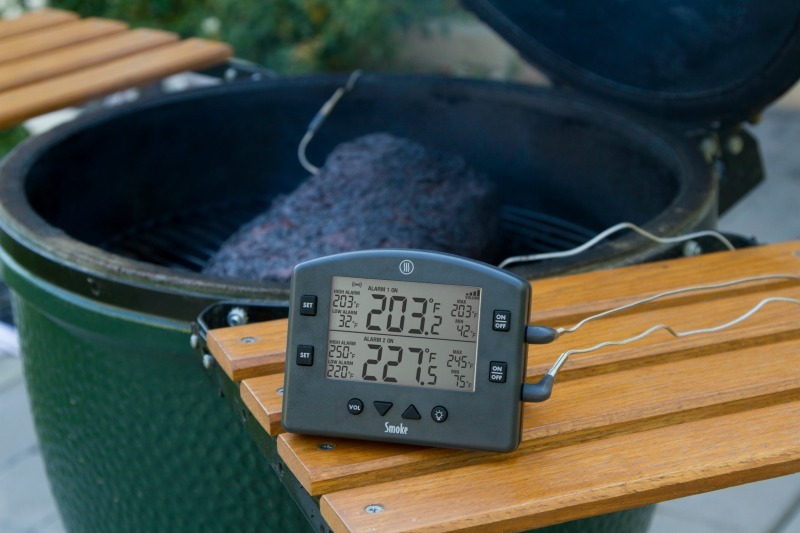 5 Reasons Why Smoke™ is the Right Tool for Amazing Brisket:

With what you spend on meat and smoker upkeep these days, and with how critical temperature is to your success, it only makes sense to invest in the proper instrument to monitor your target temperatures.

The phrase “Texas Crutch” really refers to wrapping your briskets in foil, but Franklin uses unlined butcher paper both to hold in the moisture during the second half of the cook AND to allow the crust to breathe and not get soggy like foil-lined briskets are prone to do. 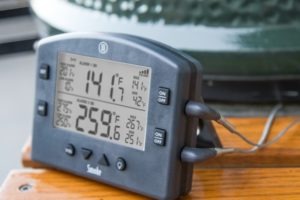 Brisket requires both a low and steady pit temperature—Franklin uses 275°F (135°C) but we used a slightly lower and slower pit temp that gave us more control in our smaller smoker: 250°F (121°C). Brisket is a tough cut because it comes from the part of the cow just above the legs. The muscles in brisket get used heavily during the life of the cow and develop a great deal of connective tissue, mostly collagen.

The low and slow cooking method literally unwinds the strands of collagen over time, turning them into single-strand proteins called “gelatin” that, far from being tough, can hold up to 10 times their weight in water. But collagen needs time to unwind.

During the first stage of our cook, we’ll use a pan full of water to keep the smoking environment humid as we bring the brisket up to 150°F (66°C). The humid environment is necessary to slow down moisture evaporation, collagen breakdown, and fat rendering, so that all those processes can occur simultaneously.

Cooking brisket in a moist atmosphere also preserves tackiness on the surface of the meat, which is necessary for the best smoke penetration.

About halfway through the cook (when the internal temperature reaches 150°F [66°C]), we’ll actually remove the brisket from the pit and wrap it in paper. Peach paper is best, but unlined butcher paper or packing paper will do. At this point, the water in our pan may have largely evaporated and the paper wrapping will help the brisket retain moisture over the second half of our cook without compromising the crust. We’ll reset our thermometer alarm for our final pull temperature of 203°F (95°C).

Briskets are sold either as a “full packer” with both the “flat” muscle and the “point” muscle still attached, or you can buy just the “flat” sold separately. Here we are smoking a full packer.

Whichever cut you choose, be sure to drain the fluids from the bag before removing your brisket. Then pat both sides of the brisket dry with a paper towel and, if necessary, chill your brisket in the fridge for a few hours. Chilled, dry, firm fat is much easier and safer to cut than soft or slippery fat.

Brisket has a thick layer of fat, or “fat cap,” on one side. Low and slow cooking allows the fat to slowly render, adding flavor and helping to keep the meat moist, but depending upon the leanness of the cut, not all of the fat will render.

Typically you’ll want to trim the fat cap to a uniform thickness about 1/4″ thick. Also, remove any large “nodules” or chunks of fat, and remove as much of the silverskin as you can as it will not break down during the cook. (Silverskin is the thin membrane covering the exposed side of the brisket, opposite the fatty side.)

A traditional brisket rub is a simple 1:1 ratio of kosher salt and ground black pepper. To coat a full-packer brisket use about 3/4 to 1 cup of the rub. No intense spices are added to allow the flavors developed in the meat through the smoking process to take center stage.

Apply the rub to the brisket and allow to rest at room temperature for about an hour.

The goal of any rub is to complement a nice piece of meat, not to obscure a crappy piece of meat. —Aaron Franklin, Franklin Barbecue

3. Fire Up Your Smoker

Start the fire and add your wood to preheat to your smoker. Franklin BBQ recommends chunks of oak for a mellow, smoky flavor that “lets the meat take center stage.” Cured oak, in particular, tends to burn cleanly and consistently over time. Don’t forget to place an aluminum pan of water beneath the cooking grate. 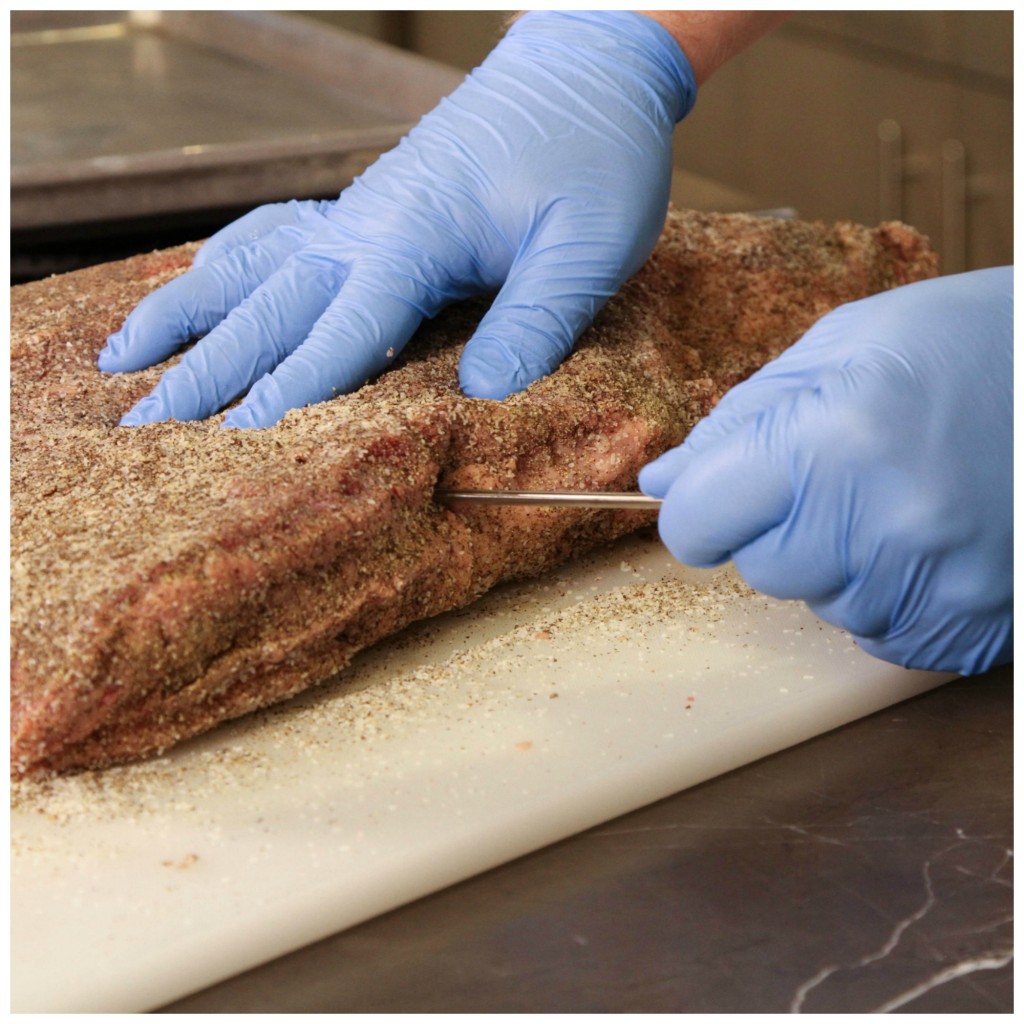 Attach the air probe* on your Smoke to the grate surface of your smoker with the grate clip*. You’ll want to be sure the clip is at least two inches away from the outside edge of the grate and one inch away from your meat.

Your Smoke’s Pro Series high temp cooking probe* goes into the thickest part of the “flat” of the brisket. The flat is the long muscle of uniform thickness. There is a layer of fat (called the “deckle”) between the flat and the point at the thicker end of the brisket that you want to avoid. You want to be sure you are measuring the temperature of the meat itself, not the rendering fat.
*Both the air probe with grate clip and the high temp cooking probe are included with each Smoke unit. 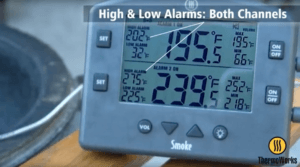 We set our air probe low alarm to 225°F (107°C) and our air probe high alarm to 275°F (135°C). This will keep our brisket right in the 250°F (121°C) range that we want for the duration of the cook. When the low alarm sounds, it’s time to increase the heat by adding fuel or ventilation. If the high alarm sounds, it’s time to cool things down by partially closing off the vents.

We set the high temp cooking probe to 150°F (66°C). This will let us know when it is time to wrap our brisket.

3. Place Brisket in the Smoker

Lay the brisket onto the grill grate. Brisket experts debate whether it is better to place it fat side up or fat side down. Aaron Franklin places his briskets fat side up because his cooker has more top heat than bottom heat. We placed our brisket fat side down, however, to shield the meat from the high bottom heat in our smoker and to make sure the fat rendered before the leaner side got overdone.

Using a probe thermometer to monitor your cook allows you to know how your brisket is doing without opening the lid to spot check, thereby releasing smoke and losing heat. Maintain a clean fire for the duration of the cook.

Once your Smoke’s meat high alarm sounds at 150°F (66°C), it’s time to open the smoker and remove the brisket.

Be sure to use gloves or multiple tongs to handle the bulky hot meat. Place the brisket on a cookie sheet or cooling rack while you lay out your paper. Be sure to close the smoker lid to keep the hot air inside while you wrap. Wrap the brisket tightly in two layers of peach paper or unlined butcher paper and place it back on the grate in your smoker. 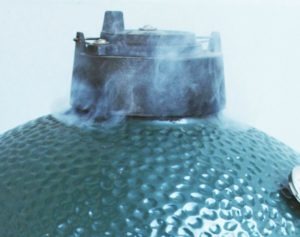 The meat still needs a couple of hours in a higher temperature range to fully render fat and dissolve collagen. Brisket can be done in a range of 200-210°F (93-99°C), but after cooking thousands of briskets, Franklin feels the magic temperature is 203°F (95°C).

Brisket should be tender but not so tender it’s falling apart. At perfect doneness, the meat’s surface will be sticky and the entire hunk of meat will feel soft and jiggly.

The stall is the point where cooking seems to come to a complete halt. What was once moving along at a steady clip, the brisket’s internal temperature will seem to plateau, typically around 155°F (68°C). This temperature plateau can last for hours. The meat is essentially sweating, and losing heat through evaporation. The wrap will help retain moisture in the meat and get you through the stall, but sometimes patience is required at this stage. Resist the temptation to increase the smoker temperature above your target 250°F (121°C).

➤ How Long Will It Take? 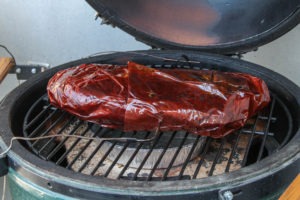 Once your final high alarm sounds, remove the brisket from the pit but don’t unwrap it or remove the probe! Keep the brisket wrapped and the high temp cooking probe in place while you let it rest.

During the rest, the meat will relax and reabsorb some of the juices that were squeezed out during cooking. If cut immediately after cooking, some juices will be lost and dry up in no time.

There will be some carryover cooking, as well, but it will be slow and minimal because of the low and slow cooking method. Keep an eye on the brisket’s internal temperature with Smoke to track carryover and its gradual cooling. When the brisket has reached 140-145°F (60-63°C) you can remove the probe, unwrap your brisket, and start to carve. OR you can allow it to continue resting wrapped for a couple more hours in a dry cooler. A good, solid rest will improve the quality of the finished meat.

There is actually quite an art to carving brisket, particularly if you smoked a “full packer” like we did with two different muscles laid against each other with grains running in perpendicular directions.

Enjoy the brisket you’ve patiently worked so hard for!

Brisket is something that takes time and experience to perfect, and temperature control is a central variable in the equation. 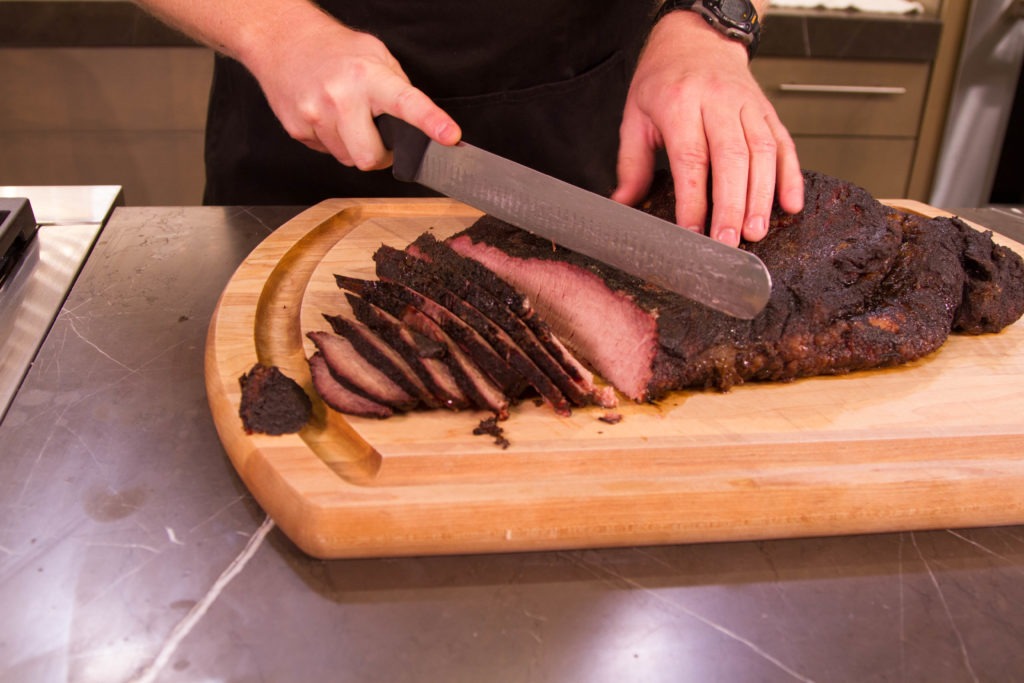