Have you ever been to a Brazilian churrasco restaurant? It’s basically a meat eater’s dream. You sit down and servers come to your table with sizzling hot cuts of grilled meats, each impaled on sword-like skewers and carved fresh at your table. And they bring you as much as you want. Never in my life did I really understand how gluttony could be considered a sin until I first ate at one of these restaurants.

One of the great stars of the churrasco dinner is the picanha steak, known to American butchers as the sirloin cap, rump cap, rump cover, or culotte steak, and it is delicious! Picanha is a steak-like cut, not a slow-cooking tough cut, and so it is better suited to grilling. But adding a touch of smoke by cooking it over hot charcoal adds a little magic to this already-decadent piece of meat.

Because it’s best cooked to medium rare or medium, monitoring the picanha’s internal temperature while you cook it is a winning move. We used our Smoke™ X2 dual-channel alarm thermometer. The picanha is gaining in popularity, so follow along and learn how to cook it now to be the first one in your neighborhood that brings the churrasco to your own backyard.

What is Picanha Steak?

As the English names (sirloin cap, etc.) imply, picanha (pronounced pi-CA-nya) is the cap or top muscle of the sirloin, lying at the very top of the cow’s rump. It is a deeply beefy cut with flavor for days that is still tender enough that collagen-breakdown is not one of our concerns. Mind you, it’s still best sliced thinly against the grain, much like a flank steak, but it is a relatively quick-cooking cut. Its fat cap is left intact, creating a self-basting layer that can protect the meat from the extreme direct heat of the grill’s flame.

In Brazil, where it is very popular, the picanha is folded over on itself, creating a crescent shape with the fat cap facing out. Each crescent is then skewered with a sword-like implement and cooked over a churrasqueira—a charcoal cooker that does not have a grill. The skewered meats are suspended across the bed of coals, much like in a Japanese yakitori restaurant, but on a larger scale. The meat is seasoned almost exclusively with salt, and salt alone.

If you have broader, sword-like skewers, this is a great time to use them. In the traditional style of cooking picanha, the fact that the meat is suspended over a bare bed of embers means that the broad skewers are very functional: they keep the meat properly oriented over the heat. If you’re cooking in a barrel cooker like we are, a hanging skewer with a bar or catch at the bottom is necessary to keep the meat from sliding off the skewer into the fire. If you don’t have any skewers like that, you can make your own picanha swords by threading the meat onto some cheap metal skewers, and then (after threading it on) bending the bottom inch or so at a 90° angle. You then slice the meat off the skewer, churrasco style, and it works great.

How to Cook Picanha Steak—Critical Temperatures

Picanha is best cooked over charcoal, so whatever kind of grill or smoker you have, start there. The cuts of meat are quite thick—2–3 inches each—and therefore can’t be cooked over blazing heat, lest the outside overcook before the inside is done. If you are cooking over a bare bed of coals, as they do in Brazil, that means controlling the distance from the heat source. If you’re cooking in a barrel-type cooker like we are, that means controlling the temperature in the barrel. We’re following Malcom’s guidelines from HowtoBBQright.com for this cook, meaning we’re shooting for about 300°F (149°C) in the barrel.

To make sure we don’t veer too far from that target air temp and get the medium-rare doneness that we want (about 130–135°F [54–57°C] in the meat), we’ll monitor both temps simultaneously with the Smoke™ X2 dual-channel thermometer. Run the probe cables through a hole in the smoker rather than under the lid to prevent kinking. We set the high-temp alarm on the meat channel to 130°F (54°C) so that we could pull the meat from the heat in time for it to rest up to our perfect medium rare. Of course, we’ll verify the pull temp with a Thermapen® ONE!

The picanha steak is one that I’m glad is gaining popularity in the States. For big, beefy flavor, and juicy tenderness, it packs quite a bang for the buck. And it’s just fun to cook and eat. By splitting the whole roast up into smaller pieces, you get a platter of medium-rare sirloin roast in the time it takes to cook a couple of steaks. And you’ll know it’s medium rare with the help of your Smoke X2 and Thermapen ONE. Pick one of these delicious roasts up from your local butcher. Once you try it, picanha steak may well become one of your favorite cuts!

Note on serving: Though the picanha as we present it here has its roots in Brazil, the cut is favored all over South America. In the Argentinian steakhouse tradition, this cut, as well as many others, is served with a brightly colored chimichurri sauce. The freshness of the herbs and the slight hit of vinegar acidity do wonders for this rich and fascinating cut. Malcom has included a recipe on his site which I recommend, or you can even use a store-bought variety in a jar.

Picanha steak cooked in a barrel cooker, based on the instructions from HowtoBBQright.com 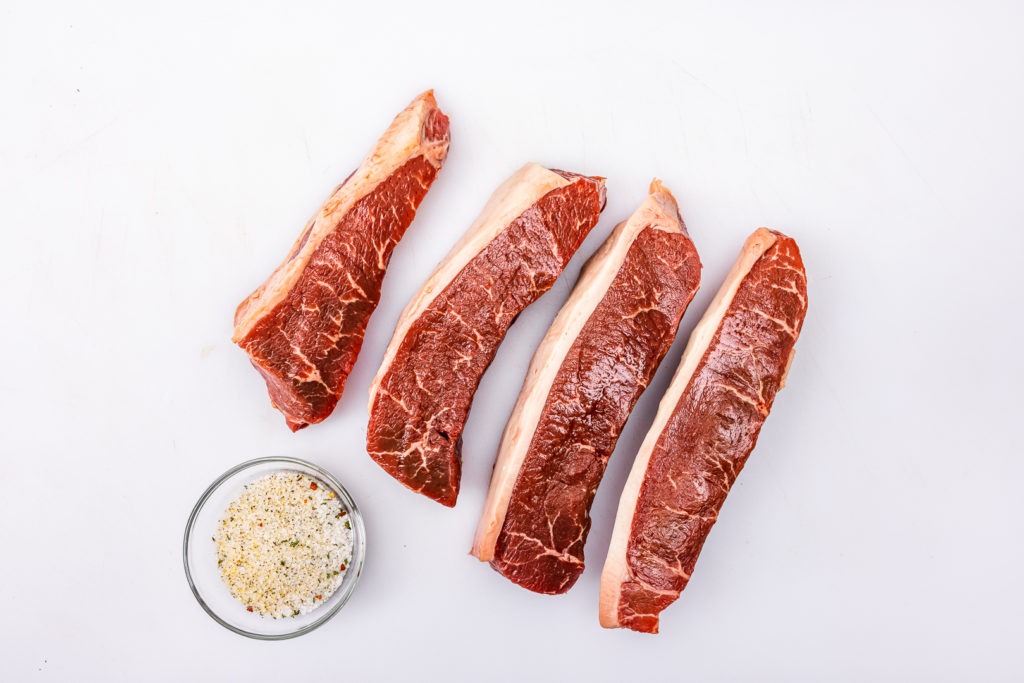 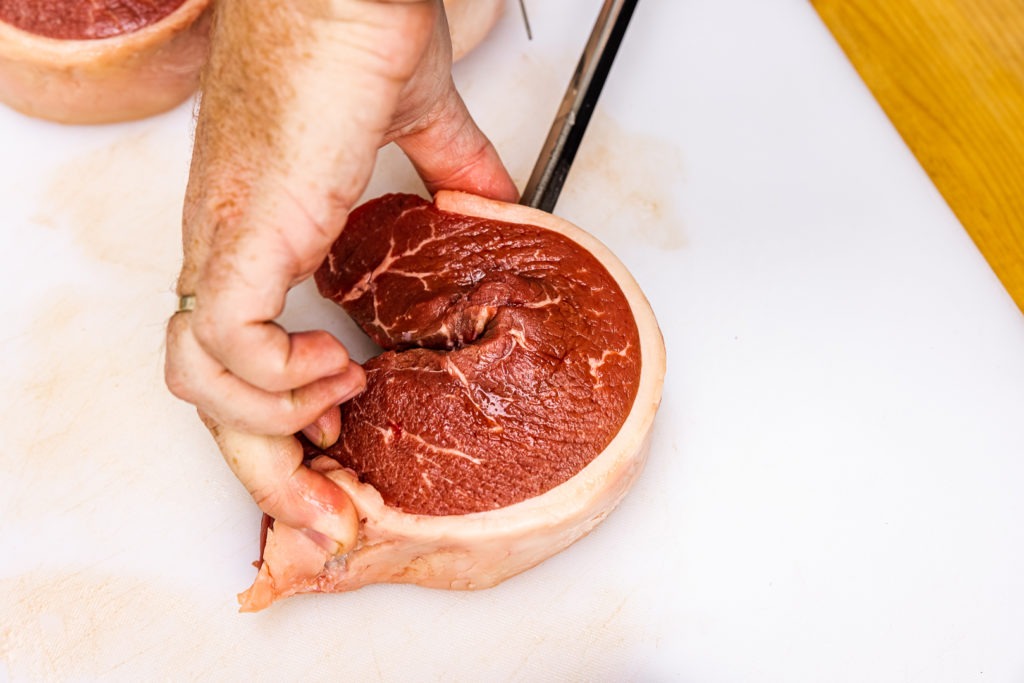 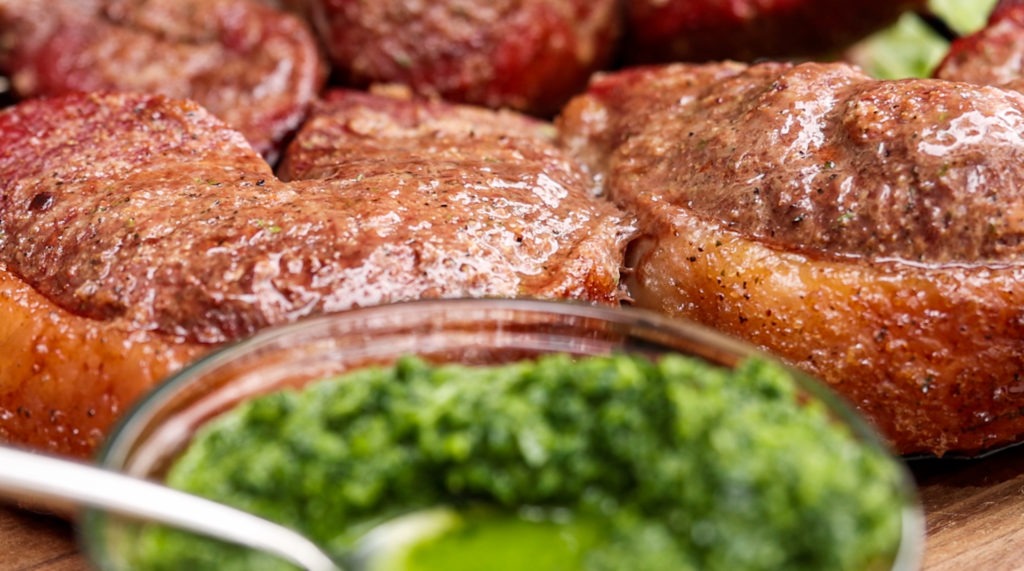