Beautifully marbled ribeye steaks are one of the richest, beefiest, most flavorful cuts available. When grilling this delectable piece of meat which is better: bone-in or boneless? The answer is completely thermal. 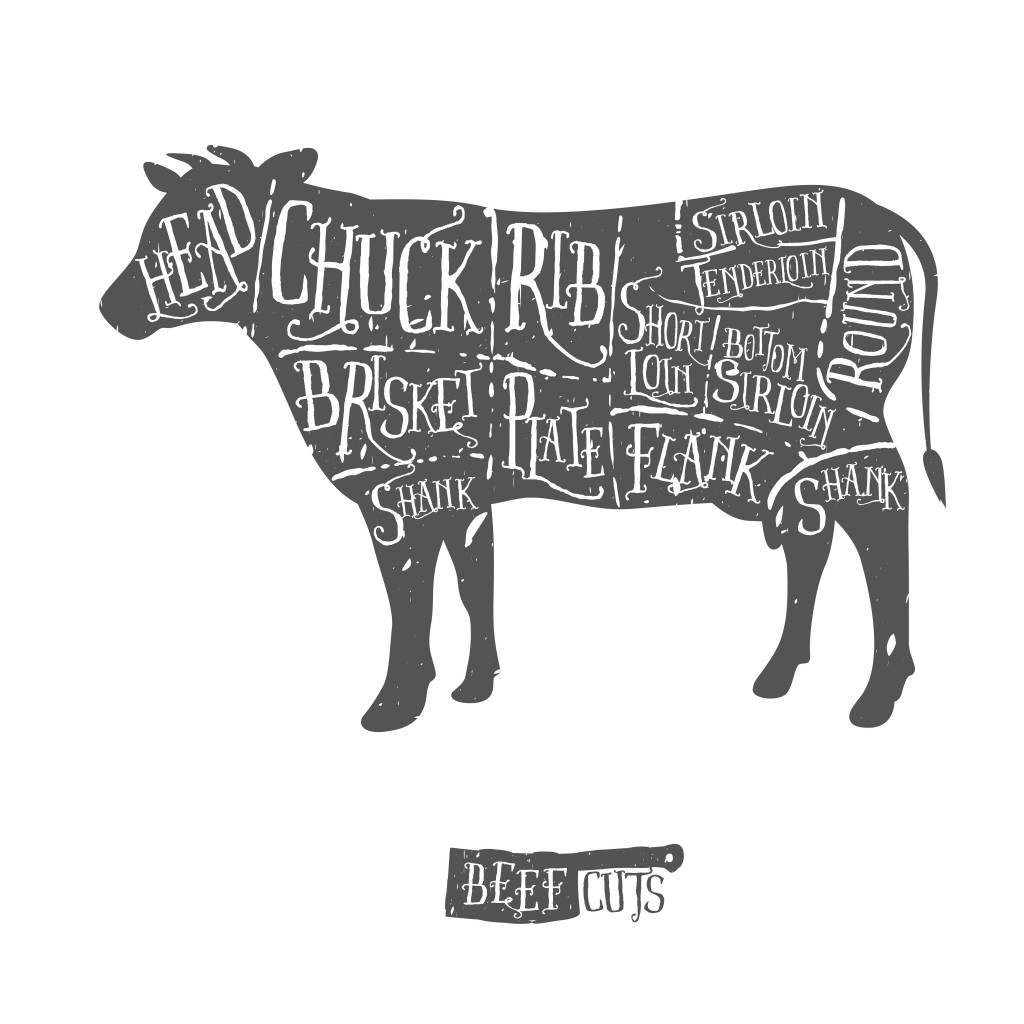 The ribeye cut (sometimes called the Delmonico steak) is from the front longissimus dorsi, from the rib primal cut of the steer. It’s very highly marbled—much of the rich, beefy flavor comes from the fat, making this an exceptionally flavorful steak. Some feel this is the tastiest quick-cooking cut of beef available.

It’s often said that bones impart rich flavors from the marrow, while others say it doesn’t make a bit of difference in the end result because the marrow won’t permeate the bone with such a quick cooking method. What’s going on with the bone, anyway? Does marrow permeate the bone as it cooks, making the meat juicier? Is there really a benefit to cooking bone-in cuts over boneless, or is it all in our heads?

What the Bone Doesn’t Do: 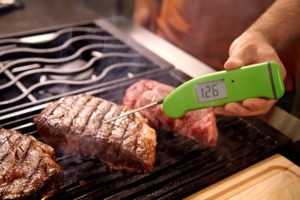 There is connective tissue surrounding the bone, and for the collagen to adequately break down into moisture-absorbing gelatin, it needs to be exposed to temperatures in the range of at least 140-160°F (60-71°C) for hours. Gelatin does indeed help retain the meat’s juices and impart a silky texture; but the quick, high-heat cooking method of grilling is not designed to break down collagen, and our target internal temperature is below 140°F (60°C). Marrow does not seep through the bone (and there is very little marrow in rib bones as compared to shank bones). Simply stated, the bone truly does not impart juiciness to the meat.

What the Bone Does:

So what really is going on? Bones are made up of a very porous calcified material whose density is much lower than that of meat. This property insulates the meat during cooking. The meat surrounding the bone will remain at a lower temperature longer than it would without the bone—even during carryover cooking. The temperature-maintaining properties of the bone will leave the meat in a thermal range where the meat is more moist and tender, giving the perception that the bone is imparting moisture when it’s really controlling the level of protein denaturation in the meat. The texture of the meat is all about temperature!

The hollow, honeycombed structure slows (heat) transfer and turns bone into an insulator. This is why meat is often said to be “tender at the bone,” more succulent there because less thoroughly cooked. —Harold McGee, On Food and Cooking

We decided to see for ourselves what difference the bone really seems to make. We had 1″ to 1-1/2″ thick cut ribeye steaks both bone-in and boneless and took them to the grill.

How to Grill Ribeye Steak

• Rub salt over the exterior surface of each steak and refrigerate overnight, uncovered on a wire rack to dry brine. This will not only season the meat but alter the protein’s structure to be able to retain more of its own moisture and become more tender. The outer surface will also dry out a bit during this process, the perfect makings of a crisp, brown crust. If you haven’t tried dry-brining before, it’ll be a game-changer! 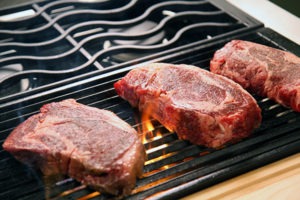 • Remove steaks from the refrigerator, rinse off the salt, and pat dry with paper towels. A dry surface is essential in creating a crisp, brown crust on the grill. (Moisture on the surface will just steam and prevent browning.) Sprinkle each side with black pepper. Do not sprinkle with additional salt. The dry brining will have seasoned the meat sufficiently.

• Prepare your grill for a two-zone fire with both indirect and direct heat.

• Place steaks on the direct heat side of your grill for initial searing, and allow to cook, undisturbed, until a crust forms and it releases easily from the grate.

Flare-ups are small, quick grease fires that occur when rendering fat drips onto the coals or heating element of your grill. Ribeye is an especially well-marbled cut of meat that is prone to flare-ups. To help prevent flare-ups (or at least keep them small), here are a few tips:

• Flip the steak after about 4-5 minutes, once the crust has formed.

Flip as often as you’d like. Flipping multiple times not only gets your meat to cook a little faster, it also makes it cook more evenly and develop a crust just as nicely as a single flip will. —Kenji Lopez-Alt, The Food Lab, pg. 309

According to a study done by Dr. Blonder in measuring the temperature gradients in a t-bone steak as it cooks, the temperature of the meat nearest the bone was about 10°F (5°C) lower than in the center—the difference between rare and medium rare. Thermal conductivity is a measure of how fast heat passes through a substance. As water transfers heat more efficiently than protein alone, meat’s thermal conductivity is dominated by its water content that drives the heat energy through. The thermal conductivity of water is .59, raw meat is .45, and bone is .34. It makes sense that the inward-seeking thermal energy from the bone side of the steak isn’t as strong as it is from the meat-only edge.

During the cook, we noticed that the bone-in steaks did indeed remain at a lower internal temperature for a longer period of time (about 10°F, just as in Dr. Blonder’s study) than the boneless steaks. The meat nearest the bone remained at a lower temperature even after resting. The bone offers an insulating property to resist temperature increases for longer periods of time, and the result is a more tender and juicy steak.

Bone-in or Boneless? What is the Answer? 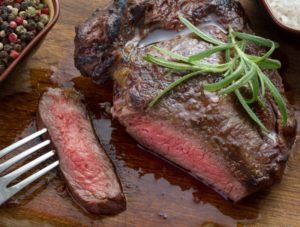 What is the answer to the perennial question of bone-in vs boneless? Experts agree that the clear runaway winner is bone-in. The key benefit the bone brings to the table is its insulating property that influences how heat transfers through the meat, affecting the final texture of the protein. Whether preparing a delectable ribeye, porterhouse, or even pork chops, start off with high-quality bone-in meat.

Put the bone-in theory to test on your own grill today!

On Food and Cooking, Harold McGee