If snow and frigid temperatures have you spending most of your time indoors, you don’t have to live without juicy burgers with a crisp, seared crust that you normally make on your grill. Here are some tips for making great, not just good, burgers on your stovetop…

Whether you grind the meat yourself, or buy it ground from the grocery store, don’t skimp on the fat. A ratio of about 20% fat is best. Less than 20% fat will yield dry burgers, while more than 20% can lead to hamburgers that are loose and fatty. When shaping the burgers, do so gently. Packing the meat together tightly presses the connective tissues together like velcro, making your burger tough, and there is less room for the protein to soak up juices, resulting in a drier burger. Handle the meat as little as possible, and allow the patties to chill thoroughly in the refrigerator until right before you’re ready to cook.

Step 1: Divide ground beef into loose piles of about 6-8 ounces (170-227 grams) each. Gently pack each pile together to form a disk about 4 inches (10 cm) in diameter. Press a small indent in the center with your thumb and generously season both sides of each patty with salt and pepper. Refrigerate.

“Handle hamburgers gently to maximize their tenderness and prevent disintegration during cooking. Press the meat into a disk as gently as possible, and allow it to set and firm in the refrigerator for a few hours. Don’t prewarm fragile patties, and don’t flip frequently.” –Keys to Good Cooking, Harold McGee, pg. 254

The best cooking surface whenever you need a crisp, brown, seared-edge on meat is cast iron. A high-quality cast iron skillet is a kitchen staple for the best seared meats, oven-roasted vegetables, cornbread, fried chicken, and more. Why? Cast iron is actually a poor heat conductor. That may sound counter-intuitive, but its poor conductivity means that once heated, the cast iron will not transfer or lose its heat energy easily. The skillet will maintain its high heat even when cold meat is placed on it—giving a much better sear than could be achieved with stainless steel. It also means that your cast iron pan can take a little longer to come up to temperature, so plan for a little extra prep time. 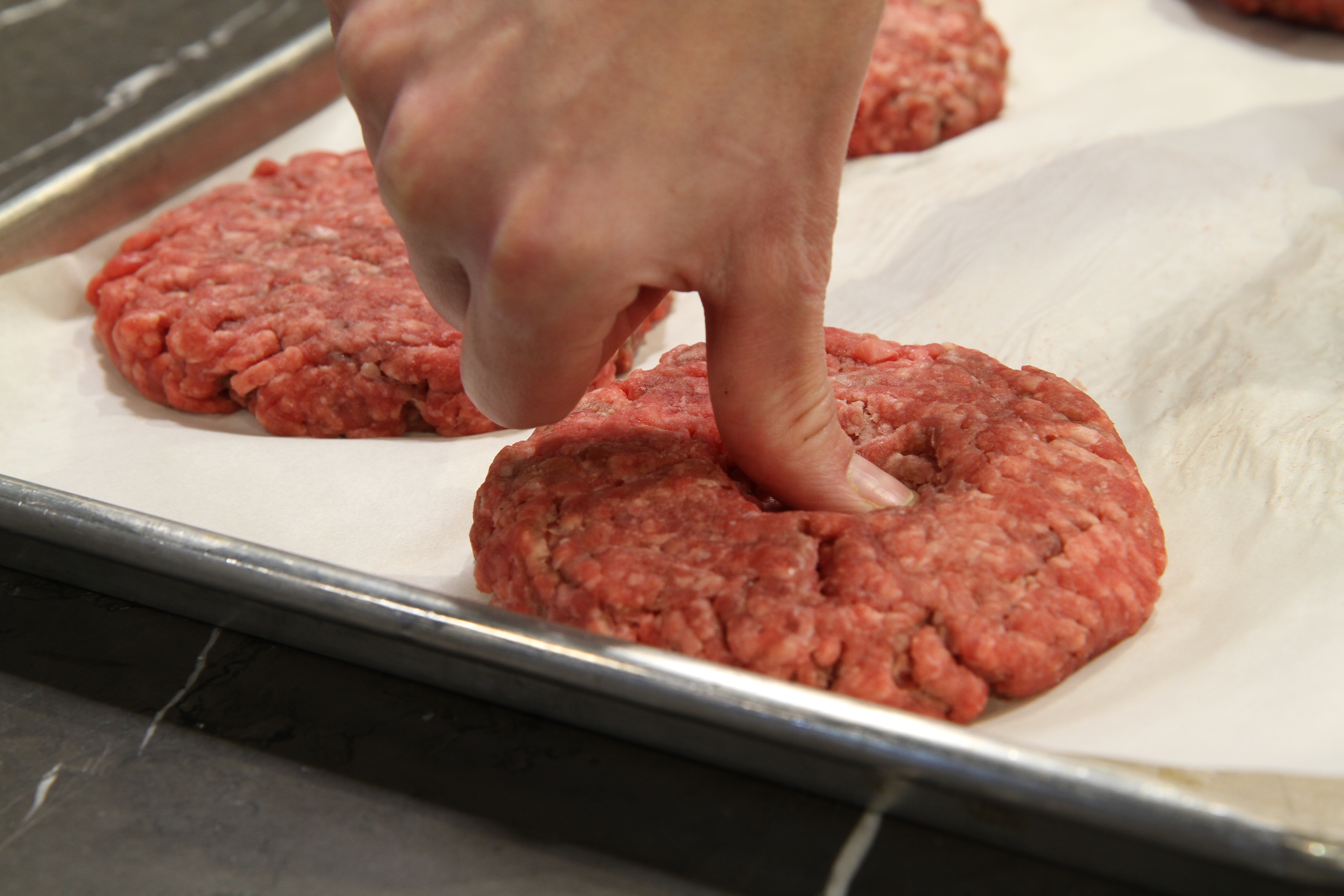 When shaping your burgers, form them slightly larger than you want them to be and press a small indent in the center with your thumb. This will account for the shrinkage that will occur due to connective tissues contracting during the cook. Your finished burgers will be flat, and appropriately-sized, rather than thicker in the middle and harder to eat. 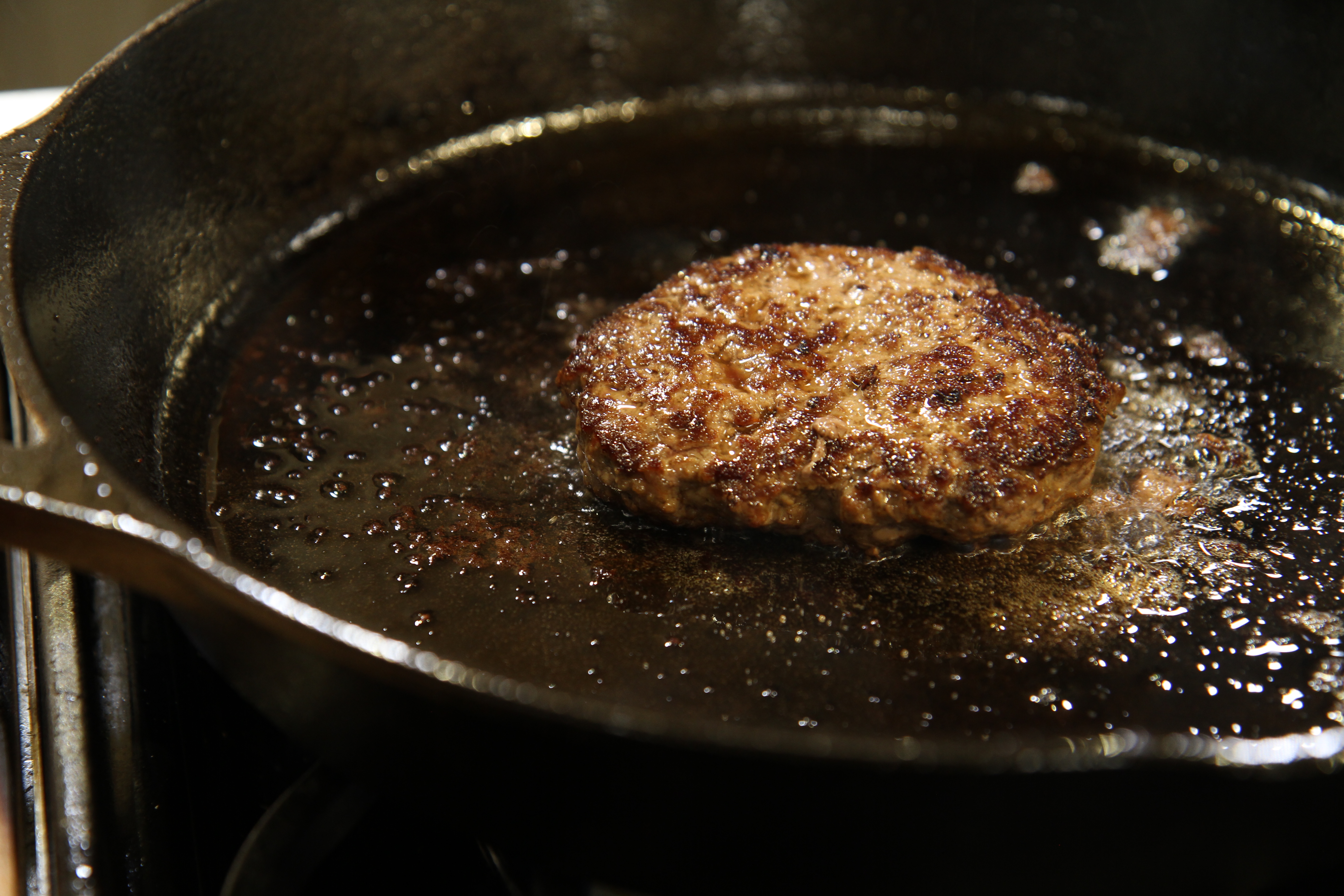 The burgers need high heat to sear properly. When using a cast iron skillet, plan your timeline appropriately to account for the extra time it will take to heat up the pan.

Step 2: Add about a teaspoon of vegetable oil to the cast iron skillet, and preheat over high heat until the oil just starts to smoke (the smoke point of vegetable oil is about 400-450°F [204-232°C]). Some like to preheat their skillet in a 350-400°F (177-204°C) oven for 30 minutes prior to making burgers. Either way, have the skillet waiting for you rather than the other way around.

Step 3: As soon as the skillet is ready, transfer burgers to the skillet with a spatula, and allow them to cook, without moving, for 3 minutes. This allows the crust to develop. Flip the burger and cook until the burger reaches your target internal temperature (about 3-4 minutes longer). We spot-checked the temperatures of our burgers with our Classic Thermapen®. 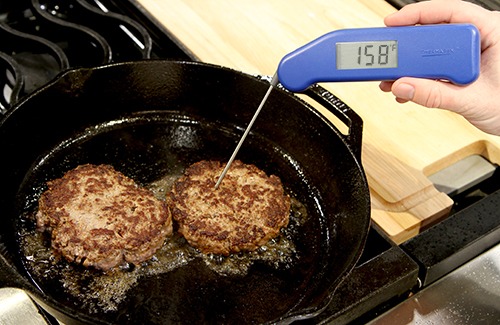 The Temperature: It is imperative that ground meats are cooked to higher temperatures than whole-muscle meat. The act of grinding meat mixes what was once on the outside (including any bacteria) with the inside (which is sterile), introducing possible contamination to all of the meat. According to FDA Food Code, hamburgers must be cooked to an internal temperature of 158°F (70°C). For more information on different methods to cook your burgers safely to lower final temperatures, check out our post, “Moist and Flavorful Burgers that are Also Safe to Eat”.

Pro Tip: To Smash, or Not to Smash?

Smash your 2 inch (5 cm) high rounded meat pucks the moment they hit the screaming hot pan down to about 1/2 inch (1.3 cm). This is ideal to maximize the amount of crispy brown crust you’ll have on the final patty. Use a stiff, sturdy spatula and smash very firmly only in the first 30 seconds of the cook, no more. Smashing beyond the first 30 seconds will result in a significantly drier burger.

These loosely packed burgers are craggy and uneven with ample surface area for a crisp crust to form, and for juices to bubble and be reabsorbed. The brown crust provides excellent flavor and texture, and the interior is tender and juicy.

Step 4: Finish up the burger! We not only lined up all the usual burger suspects: buttered and toasted bun, lettuce, onion, tomatoes, and cheese, but we also indulged in Kenji’s recipe for Shake Shack’s secret sauce—it was phenomenal! You may never go back to plain ketchup and mayo again.

Full-flavored, juicy burgers inside your kitchen rather than outside on your snow-covered grill really do satisfy! The main key is the cast iron pan and its heat retention properties. Grab a Thermapen and get cooking!