If a roast of beef is important to your holiday gathering, but you just can’t get behind paying $150+ for a prime rib, we’d like to recommend that you try a roasted eye of round. This economy cut has all the beefy flavor that you want, but at a fraction of the price of prime rib. Yes, there are differences, but it’s a great stand-in for a standing rib roast.

Here, we’ll look at how to properly roast an eye of round to make the most of the cut. Perfect medium rare? No problems with our temperature guidance!

What is eye of round?

Eye of round is a lean muscle that is part of the primal beef round—the upper hind leg of the beef. Being a leg, most of the round is very tough, which makes it great for stewing, but the eye of round is relatively tender. It often comes with a fat cap, but may come trimmed bare. It is a long-ish muscle, so and so has the same rough dimensions as the eye loin in a prime rib.

Leg muscles are well used, and therefore very flavorful. In fact, the “beefiness” of eye of round can be stronger than that of the ribeye. It can be cut up and used as stew meat, yes, but it can be dry in that application. It does very well when roasted to a rosy medium rare!

Eye of round as a substitute for prime rib

As noted already, the eye is as beefy as a prime rib and shares the same general dimensions as prime rib. But what are the differences? Well, fat for one. Yes, the eye of a prime rib is also very lean (unless it is very high-grade meat), but prime rib has a lot of fat in it that many guests won’t like eating. Eye of round doesn’t have that problem.

Another difference is tenderness. And here, sadly, the eye of round loses points. We’ll talk below about thermal strategies to best tenderize the cut, but even with those strategies, eye of round probably isn’t going to be as tender as a rib roast. That’s not to say it’s super chewy, just that it needs to be approached differently. Where one might carve inch-thick slabs of prime rib, eye of round should be sliced much thinner—1/8–1/4″ thick. The chewiness of this cut really lies in the direction of the meat grain, so cutting those fibers short eliminates most of the chewiness.

Thermal strategies for tender eye of round

How can we maximize tenderness in this cut? First, don’t overcook it! Just like with a standing rib roast, we recommend searing this cut before roasting it to get some tasty browning on it. Then cook it using a leave-in probe thermometer like ChefAlarm®. Set the high-temp alarm to 125°F (52°C) and pull it from the oven once it sounds. As the meat rests, it will continue to carry-over cook until it is perfectly medium-rare—130–135°F (54–57°C). Using actual temperatures to cook the beef instead of wildly guessing at its doneness is a sure key to success!

But what about the oven? It needs to be kept low, 225°F(107°C). By increasing the internal temperature of the meat slowly, we preserve and even increase the enzymatic action inside the meat that breaks down tough muscle fibers.

The caplains begin to denature and lose activity around 105°F/40°C, the cathepsins around 122°F/ 50°C. But below this critical range, the higher the temperature, the faster the enzymes work. Some accelerated “aging” can take place during cooking.

Other thermal considerations for roasting eye of round

Eye of round is not perfectly cylindrical. It tapers down quite a bit towards either end of the roast, and that can be a thermal problem. A thin taper will overcook, spoiling our aim of perfect doneness throughout. Tie the roast as you would a beef tenderloin, making ties every inch or two. Try to get as even a diameter as you can.

Another thermal process to consider is browning. We need a brown crust for flavor, but we won’t get it from the low oven we need for proper cooking. Pat the roast dry and heat your pan to at least 425°F (218°C) before browning it. You’ll brown the amino acids right on the surface without sending heat deep into the meat. For even better results, chill the roast in the freezer for about 15 minutes before browning. The thermal barrier you establish will help prevent grey-ring in the meat.

We don’t always have the means to cook a big, beautiful prime rib roast. But even if we did, it’s not always what we want. With an eye of round, you can get most of the benefits of a fancy rib roast, but you can get them at a fraction of the cost. It’s a tremendously good cut, if you don’t overcook it, and it’s easy to get right if you use the right tools.

And even if you do want to cook a prime rib, but are a little scared of your first attempt at it, an eye of round can be a great way to practice the cook on a more affordable piece of meat.

Give this roast a try sometime soon. You’ll love the flavor and, as long as you slice it carefully, the texture. It’s a cut worth considering, for sure!

Simple roast eye of round: an alternative to prime rib 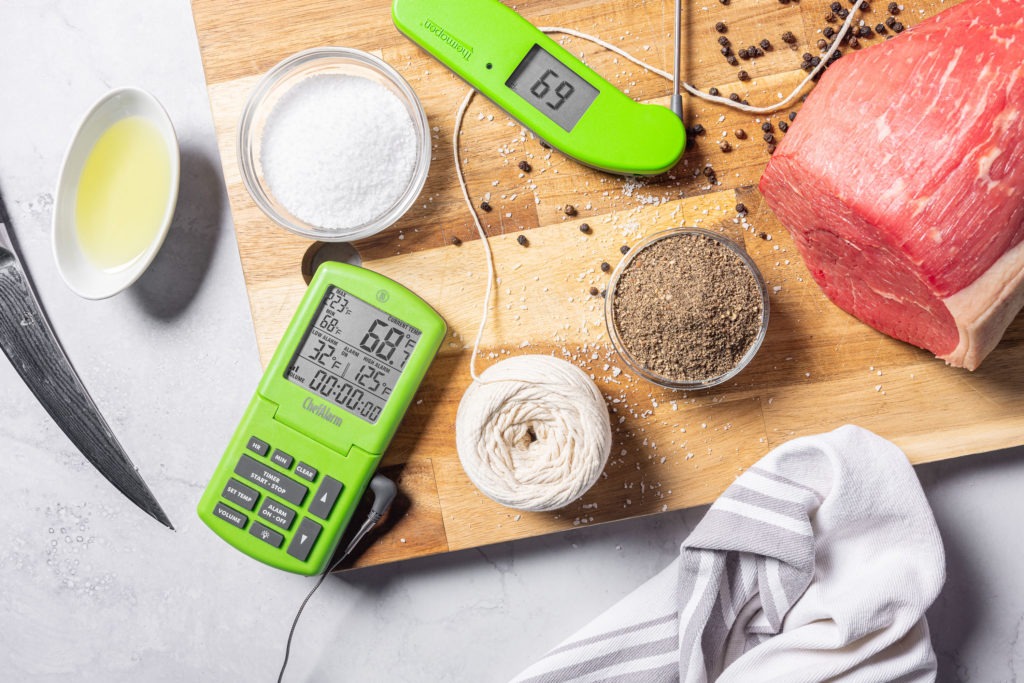 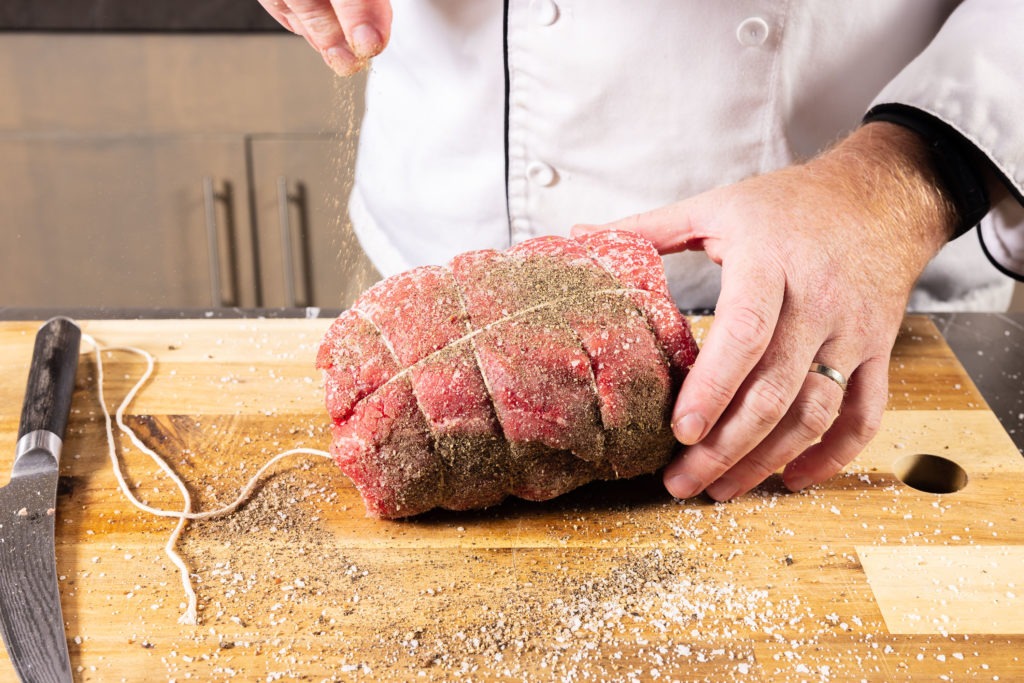 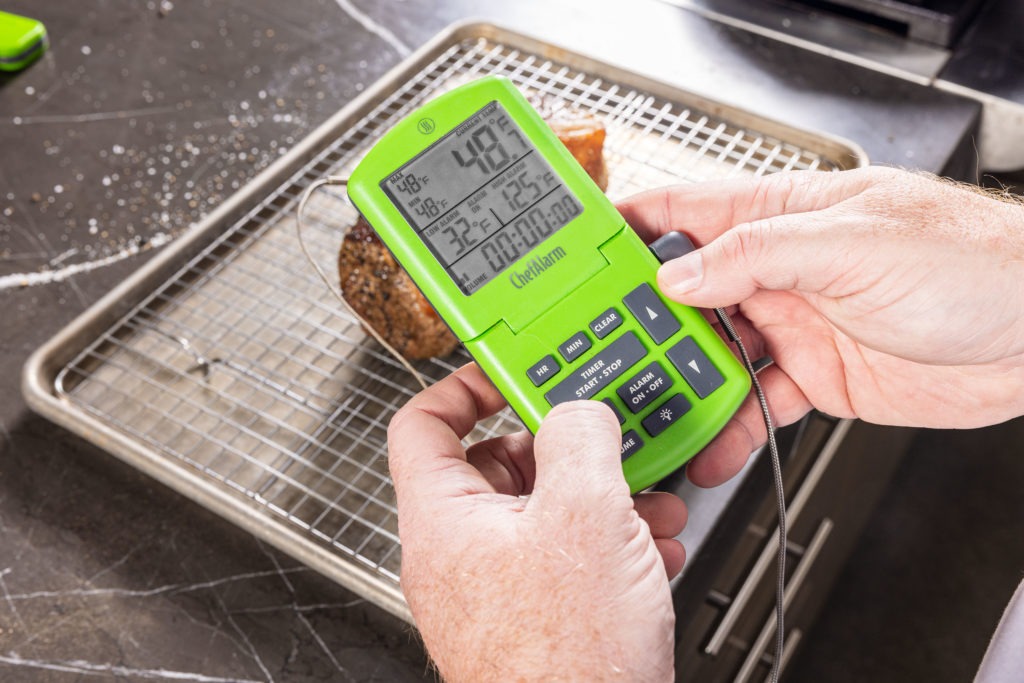 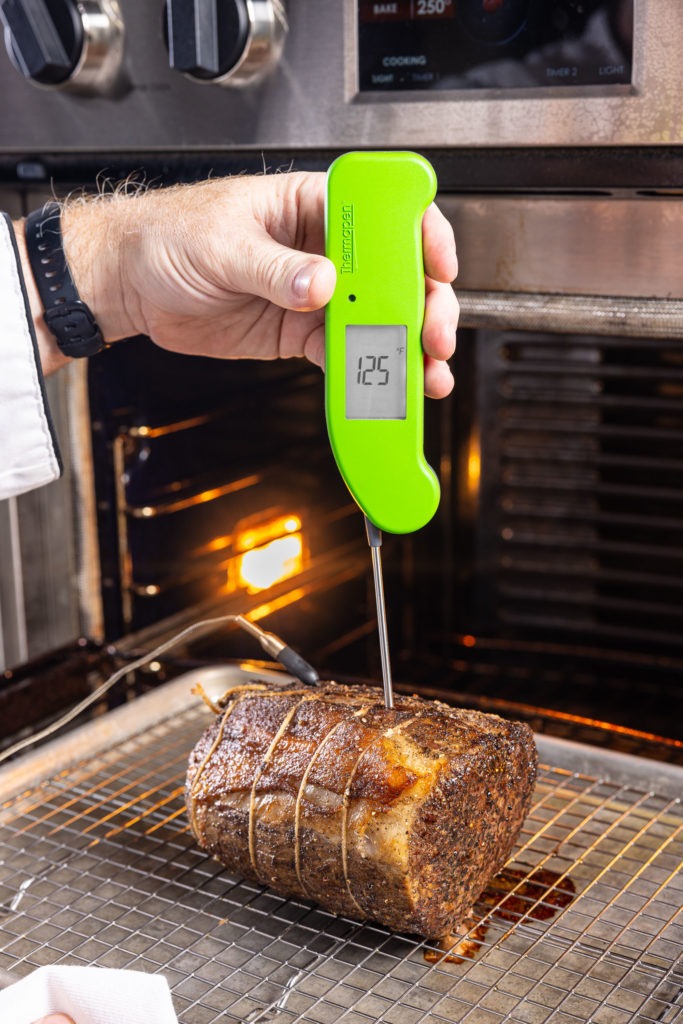 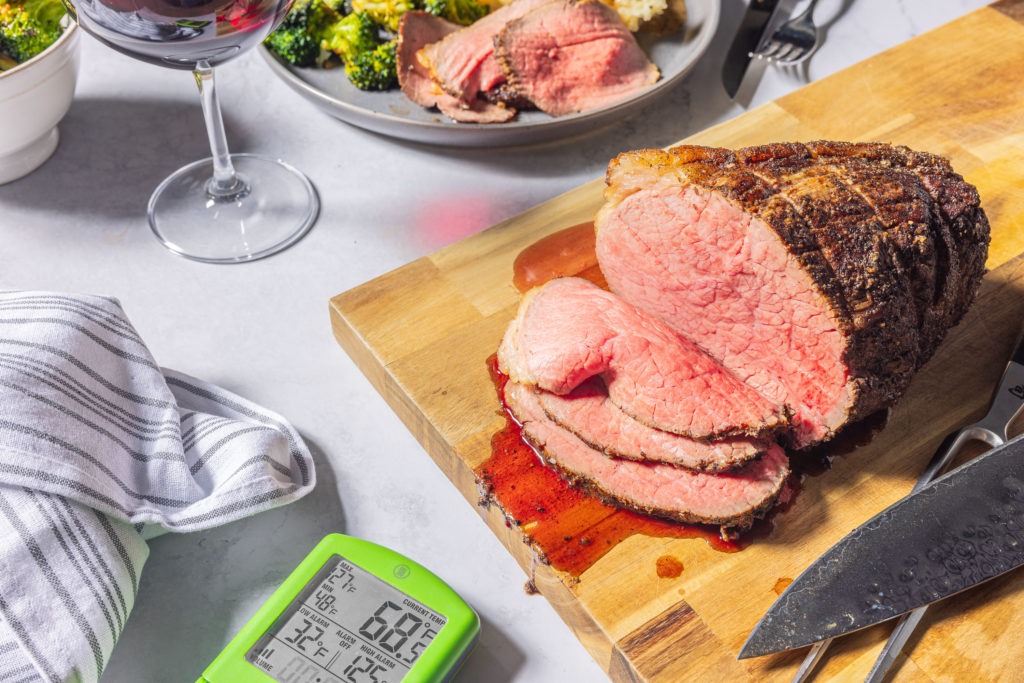 On Food and Cooking, by Harold McGee