A PMSO Tenderloin can be an economical answer to restaurant quality fare – served up right in your own kitchen. Arguably one of the best cuts of meat, a tenderloin – butchered in the right way – can provide several luxury meals at the fraction of the cost of going out for a family dinner.

Getting the Most out of Your Beef Tenderloin

When hunting for a tenderloin, your best buy is going to be the Peeled-Side-Meat-On (PSMO) variety found in many discount club stores. A PSMO beef tenderloin is vacuumed packed and is less expensive than the pre-butchered plastic wrapped cuts in your grocer’s freezer. (In some cases as much as a third of the price!)

Once you’ve got your meat home it will take a little bit of time to prep the loin before it’s ready to cut and portion. This, unfortunately is the price you pay for getting the less expensive PSMO tenderloin instead of the pre-trimmed butcher’s choice. On the bright side however, Bobby Flay, offers up this great advice for butchering your tenderloin and choosing which cut is right for your main course.

With the loin trimmed, cleaned and ready to cut you’re left with a plethora of menu options that include Filet Mignon, thin-cut (minute) steaks, traditional roast tenderloin, decadent ChateauBriand and don’t forget the chain meat and the trimmings. These make incredible stroganoffs, elegant tacos, tasty steak sandwiches, or braise them for a memorable stew. Size-up the tenderloin on your cutting board and (with knife in hand) butcher the large loin into your preferred cuts. 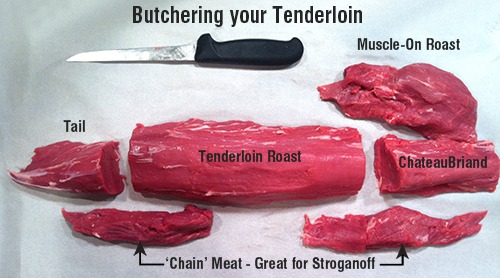 ➤ Save for Later Use

This is actually where the value of buying the whole tenderloin comes into play. What you don’t eat tonight can be wrapped refrigerated or frozen until your next meal. Just make sure you’re storing the meat you intend to eat soon (within 3-5 days) below 37°F, and other cuts you’d like to save for much later in the freezer at 0°F. It’s always a good idea to label your wrapped meat with a time and date stamp to help you remember when they were prepped and stored.

The thick, middle portion of the tenderloin will work perfectly for a traditional roast.

Transfer roast to a wire rack set in a rimmed baking sheet. Insert a temperature probe into the center of the roast to monitor the internal temperature as it cooks. The DOT oven thermometer is ideal for this application. With the probe in place, roast until the internal temp reaches 115-120°F. This could take between 60 to 90 minutes depending on your oven and the size and starting temperature of the meat. 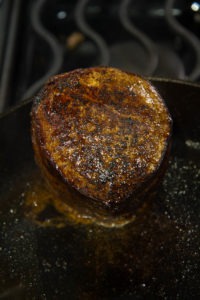 Remove the roast, set on counter and cover with aluminum foil while you preheat the pan, or broiler. If the roast is smaller, and it will fit a skillet, brown by turning in a hot skillet with butter. Larger cuts can be browned under the broiler. When the burners are hot return the roast to the oven and rotate top-to-bottom. Do not leave it too long or you will get a gray perimeter band of meat when sliced.

Note that the meat temperature will continue to rise while waiting to brown and during the browning. Depending on your target finish temperature pull the roast from the oven as much as 5-10°F before you’ve reached your ideal temp.

After browning, cover the meat with foil and let rest for 15 minutes. Meat temperature will continue rising during the rest. A typical tenderloin may rise about 5-10°F during the rest, if not left under the broiler for too long. The highest temperature reached should be about 130°F-135°F.

Remove twine and cut meat crosswise into 3/8 to 1/2-inch thick slices.Ideally, a roasted tenderloin should be served medium-rare. Remember that some people prefer the meat overcooked (be patient with them). If your roast is a longer cut, with the side muscle intact at one end, the smaller diameter end of the roast will naturally cook to a higher temperature before the larger end reaches 125°F. When you slice the whole roast to serve, guests can select from slices that range from more done at one end to less done at the other.

A Word on Doneness…

The Thermapen Mk4 is a great tool for checking doneness across the length of the roast. The fast and accurate temperature readings will tell you your range of doneness for various guest preferences. 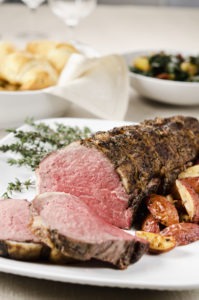 A roast that reaches 145°F will normally still have some pink, will retain much of the flavor and tenderness, and will still pass as done enough for most guests. If you pass the normally accepted level of 150°F for medium well, the quality of the meat and flavor will decline. Sauce or gravy are important for more well-done tenderloin (dry). Less so for less-done. Bottom line: choose your dinner guests wisely!

Generally, the lower the setting and the longer you can take, the better. The lower settings will heat the meat more slowly and evenly, and will present a lower risk of going over your target temperature.

A setting of 190°F in a convection oven works great. However, you can still have good results at settings up to 300°F. Just be aware that the higher the temperature, the more latent heat will be traveling through the meat when you take it out. The rise in temperature after cooking or during browning will be higher and faster.

A beef tenderloin roast is a luxurious and decadent cut of meat that deserves a little bit of extra TLC. With a Thermapen Mk4 by your side you can be sure to get the most out of your next tenderloin cook. Cook with confidence! 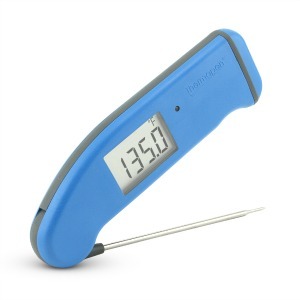 Thermapen Mk4– The Mk4 is perfect for spot checking the overall internal temperature of your roast when you pull it out of the oven. 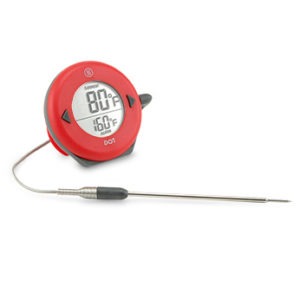 ThermoWorks DOT– The DOT is the perfect tool to measure the internal temperature of your roast as it cooks. Just set the alarm and wait for it to go off. It’s just that simple!